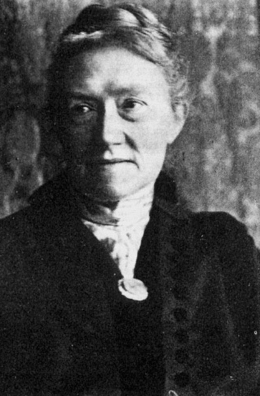 Main achievements: Discovered the influence of impurities on the surface tension.

Agnes Luise Wilhelmine Pockels, was a German pioneer in chemistry. Her work was fundamental in establishing the modern discipline known as surface science, which describes the properties of liquid and solid surfaces.

Pockels was born in Venice, Italy, in 1862. At the time, Venice was under Austrian rule, and Pockels' father served in the Austrian Army. When he fell sick with malaria, the family moved in 1871 to Brunswick, Lower Saxony, which was part of the nascent German Empire. There, Pockels attended the Municipal High School for Girls.

As a child, Pockels was interested in science, and would have liked to study physics. In those days, however, women had no access to universities. It was only through her younger brother, Friedrich Carl Alwin Pockels, that she gained access to scientific literature. Friedrich, who then studied at the University of Göttingen, was a famous scientist himself; he is known for the Pockels effect.

As legend has it, Pockels discovered the influence of impurities on the surface tension of fluids doing the dishes in her own kitchen. She was unwed and the caretaker of her ailing parents, so she spent much time cooking and cleaning with various oils, soaps, and other household products. Despite her lack of formal training, Pockels was able to measure the surface tension of water by devising an apparatus known as the Pockels trough, a key instrument in the new discipline of surface science. Using an improved version of this slide trough, American chemist Irving Langmuir made additional discoveries on the properties of surface molecules, which earned him a Nobel Prize in chemistry in 1932. Pockels' device is also a direct antecedent of the Langmuir–Blodgett trough, developed later by Langmuir and physicist Katharine Blodgett.

In 1891, with the help of Lord Rayleigh, Pockels published her first paper, "Surface Tension," on her measurements in the journal Nature. Thus began her career studying surface films. She never received a formal appointment, but she published a number of papers and eventually received recognition as a pioneer in the new field of surface science.

Pockels died in 1935 in Brunswick, Germany. She never married.

In 1931, together with Henri Devaux, Pockels received the Laura Leonard award from the Colloid Society. In the following year, the Braunschweig University of Technology granted her an honorary PhD.