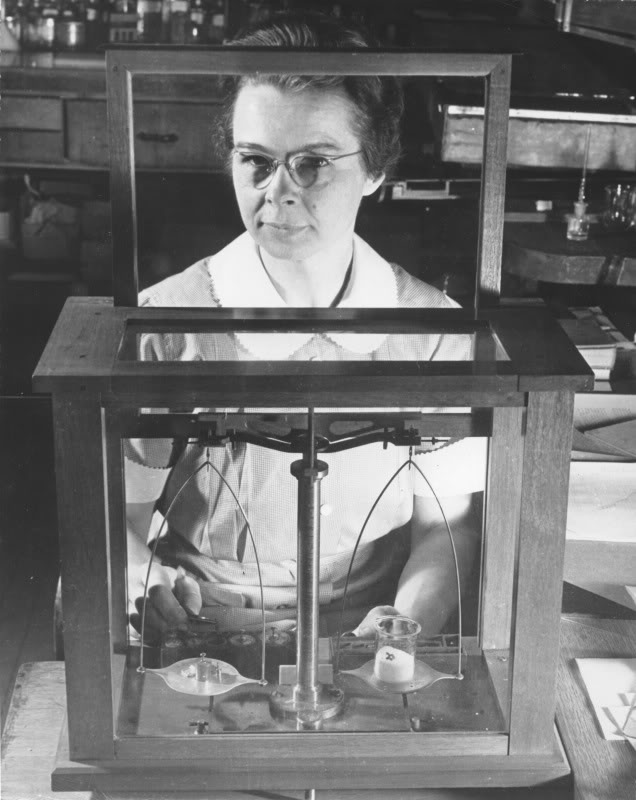 Katharine Burr Blodgett was the first woman to be awarded a Ph.D. in physics from the University of Cambridge in 1926. After receiving her master's degree, she was hired by General Electric, where she invented low-reflectance "invisible" glass.

She was the second child of Katharine Burr and George Blodgett. Her father was a patent attorney at General Electric where he headed that department. He was shot and killed in his home by a burglar just before she was born. GE offered a $5,000 reward for the arrest and conviction of the killer, but the suspected killer hanged himself in his jail cell in Salem, New York. Her mother was financially secure after her husband's death, and she moved to New York City with Katharine and her son George Jr. shortly after Katharine's birth. In 1901 the family moved to France. In 1912, Blodgett returned to New York City with her family where she was enrolled in the Rayson School. This private school gave her the same quality of education that the boys her age were receiving.

From an early age, she had shown a talent for mathematics. Blodgett subsequently won a scholarship to Bryn Mawr College, where she excelled at mathematics and physics; she received her B.A. degree from Bryn Mawr in 1917. Blodgett decided to pursue scientific research and visited the Schenectady GE plant during Christmas break of her senior year. Her father's former colleagues introduced her to research chemist Irving Langmuir. After a tour of his laboratory, Langmuir told the eighteen-year-old Blodgett that she needed to broaden her scientific education before coming to work for him. Following his advice, Blodgett enrolled at the University of Chicago in 1918 to pursue a master's degree. Since a job awaited her in industrial research, she picked a related subject for her thesis: the chemical structure of gas masks. World War I was raging and gas masks were needed to protect troops against poison gases. Blodgett determined that almost all poisonous gases can be adsorbed by carbon molecules. She published a paper on gas mask materials in the scientific journal Physical Review at the age of 21.

In 1924, Blodgett was awarded a position in a physics Ph.D. program at Sir Ernest Rutherford's Cavendish Laboratory. She wrote her dissertation on the behavior of electrons in ionized mercury vapor. Blodgett was the first woman to earn a Ph.D. in physics from Cambridge University, in 1926. Blodgett was hired by General Electric as a research scientist as soon as she had received her master's degree in 1920. She was the first woman to work as a scientist for General Electric Laboratory in Schenectady, NY. During her research, she often worked with Langmuir, who had worked with her father. Blodgett and Langmuir worked on monomolecular coatings designed to cover surfaces of water, metal, or glass. These special coatings were oily and could be deposited in layers only a few nanometers thick. It wasn’t until the 1930s that she discovered uses for the coatings.

In 1935, Blodgett devised a method to spread these monomolecular coatings one at a time onto glass or metal. She used a barium stearate film to cover glass with 44 monomolecular layers that made the glass more than 99% transmissive, creating "invisible" glass.[citation needed] This coating is now called the Langmuir-Blodgett film. One such use for her glass was in the cinematography of the popular film Gone with the Wind (1939). The Langmuir-Blodgett trough is also named after her. Blodgett also invented the color gauge, a method to measure the molecular coatings on the glass to one millionth of an inch. The gauge employs the concept that different thicknesses of coatings are different colors. She saw that soap bubbles were different colors and discovered that, at each place a soap bubble was a new color, it had a different thickness. Before her invention, the best instruments were only accurate to a few thousandths of an inch. She made a glass "ruler" to show different colors corresponding to the thicknesses and measuring thickness became as simple as matching colors. Dr. Blodgett was issued eight U.S. patents during her career. She was the sole inventor on all but two of the patents, working with Vincent J. Schaefer as co-inventor. Blodgett published over 30 technical papers in various scientific journals and was the inventor of poison gas adsorbents, methods for deicing aircraft wings, and improving smokescreens.