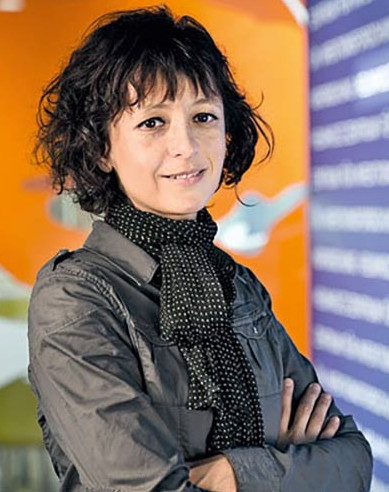 Emmanuelle Charpentier is a French professor and researcher in microbiology, genetics and biochemistry. Since 2015, she has been a Director at the Max Planck Institute for Infection Biology in Berlin, Germany. In 2018, she founded an independent research institute, the Max Planck Unit for the Science of Pathogens. In 2020, Emmanuelle Charpentier and Jennifer Doudna were awarded the Nobel Prize in Chemistry "for the development of a method for genome editing".

Born in 1968 in Juvisy-sur-Orge in France, Charpentier studied biochemistry, microbiology and genetics at the Pierre and Marie Curie University (today the Faculty of Science of Sorbonne University) in Paris. She was a graduate student at the Institut Pasteur from 1992 to 1995, and was awarded a research doctorate. Charpentier's PhD project investigated molecular mechanisms involved in antibiotic resistance.

Charpentier worked as a university teaching assistant at Pierre and Marie Curie University from 1993 to 1995 and as a postdoctoral fellow at the Institut Pasteur from 1995 to 1996. She moved to the US and worked as a postdoctoral fellow at the Rockefeller University in New York from 1996 to 1997. During this time, Charpentier worked in the lab of microbiologist Elaine Tuomanen. Tuomanen's lab investigated how the pathogen Streptococcus pneumoniae utilizes mobile genetic elements to alter its genome. Charpentier also helped demonstrate how S. pneumoniae develop vancomycin resistance.

Charpentier worked as an assistant research scientist at the New York University Medical Center from 1997 to 1999. There she worked in the lab of Pamela Cowin, a skin-cell biologist interested in mammalian gene manipulation. Charpentier published a paper exploring the regulation of hair growth in mice.[9] She held the position of Research Associate at the St. Jude Children's Research Hospital and at the Skirball Institute of Biomolecular Medicine in New York from 1999 to 2002.

After five years in the United States, Charpentier returned to Europe and became lab head and a guest professor at the Institute of Microbiology and Genetics, University of Vienna, from 2002 to 2004. In 2004, Charpentier published her discovery of an RNA molecule involved in the regulation of virulence-factor synthesis in Streptococcus pyogenes. From 2004 to 2006 she was lab head and an assistant professor at the Department of Microbiology and Immunobiology. In 2006 she became private docent (Microbiology) and received her habilitation at the Centre of Molecular Biology. From 2006 to 2009 she worked as lab head and Associate Professor at the Max F. Perutz Laboratories.

Charpentier moved to Sweden and became lab head and associate professor at the Laboratory for Molecular Infection Medicine Sweden (MIMS), at Umeå University. She held these positions from 2009 till 2014, and was promoted to lab head as Visiting Professor in 2014. She moved to Germany to act as department head and W3 Professor at the Helmholtz Centre for Infection Research in Braunschweig and the Hannover Medical School from 2013 until 2015. In 2014 she became an Alexander von Humboldt Professor.

In 2015 Charpentier accepted an offer from the German Max Planck Society to become a scientific member of the society and a director at the Max Planck Institute for Infection Biology in Berlin. Since 2016, she has been a Honorary Professor at Humboldt University in Berlin, and since 2018, she is the Founding and Acting Director of the Max Planck Unit for the Science of Pathogens. Charpentier retained her position as Visiting Professor at Umeå University until the end of 2017, where a new donation from the Kempe Foundations and the Knut and Alice Wallenberg Foundation has given her the opportunity to offer more young researchers positions within research groups of the MIMS Laboratory.

Charpentier is best known for her role in deciphering the molecular mechanisms of the bacterial CRISPR/Cas9 immune system and repurposing it into a tool for genome editing. In particular, she uncovered a novel mechanism for the maturation of a non-coding RNA which is pivotal in the function of CRISPR/Cas9. Specifically, Charpentier demonstrated that a small RNA called tracrRNA is essential for the maturation of crRNA.

In 2011, Charpentier met Jennifer Doudna at a research conference and they began a collaboration. Working with Jennifer Doudna's laboratory, Charpentier's laboratory showed that Cas9 could be used to make cuts in any DNA sequence desired. The method they developed involved the combination of Cas9 with easily created synthetic "guide RNA" molecules. Synthetic guide RNA is a chimera of crRNA and tracrRNA; therefore, this discovery demonstrated that the CRISPR-Cas9 technology could be used to edit the genome with relative ease. Researchers worldwide have employed this method successfully to edit the DNA sequences of plants, animals, and laboratory cell lines.

In 2013, Charpentier co-founded CRISPR Therapeutics along with Shaun Foy and Rodger Novak.