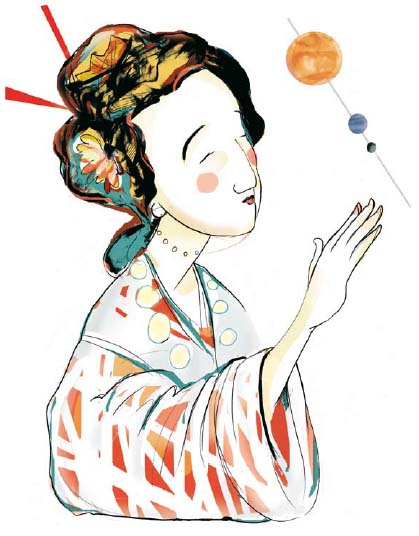 Main achievements: Author of the books: "Dispute of the Procession of the Equinoxes", "Dispute of Longitude and Stars" and "The Explanation of a Lunar Eclipse".

Wang Zhenyi was a famous female scientist from the Qing dynasty. She breached the feudal customs of the time which hindered women's rights and arduously worked to educate herself in subjects such as astronomy, mathematics, geography, and medicine. She was a very strong and intelligent woman well known for her contributions in astronomy, mathematics, and poetry. She was an acclaimed scholar, "An extraordinary woman of 18th century China."

Zhenyi’s ancestral home is in Anhui province, but her grandfather's family moved to Jiangning or present-day Nanjing. Wang Zhenyi was very fond of reading when she was a child and was very clever. Her family consists of her grandfather, grandmother and her father. Her grandfather Wang Zhefu, was a former governor of Fengchen county and Xuanhua District. He had broad and profound intellect with a deep love for reading and had a collection of over seventy-five bookshelves. Her father Wang Xichen failed the imperial examination and instead studied medical science and recorded his findings in a four-volume collection called Yifang yanchao (Collection of Medical Prescriptions). Her grandmother is named neé Dong. Her grandfather was her first teacher in astronomy, her grandmother was her teacher of poetry, and her father taught her medicine, geography, and mathematics. Wang Zhefu, her grandfather, died in 1782 and the family traveled to Jiling (close to the Great Wall) for his funeral. They stayed in the region for five years, which is where Zhenyi gained extensive knowledge from reading her grandfather’s collection of books as well as learning equestrian skills, archery, and martial arts from the wife of a Mongolian general named Aa.

At the age of sixteen, Wang Zhenyi traveled south of the Yangtze river with her father, until she moved back to the capital. She was able to see places like Shaanxi, Hubei, and Guangdong, broadening her horizons and enriching her experiences. When she was eighteen, she made friends with female scholars in Jiangning through her poetry and began focusing on her studies in astronomy and mathematics, most of which were self-taught. At age twenty-five she married Zhan Mei from Xuan cheng in Anhui province. After her marriage, she became better known for her poetry and knowledge in mathematics and astronomy that she once taught some male students. Wang Zhenyi died at age twenty-nine and had no children.

Although she only lived to be twenty-nine, Wang Zhenyi was very accomplished in the academic world. She excelled in astronomy and mathematics. One of her contributions was being able to describe her views of celestial phenomena in her article, "Dispute of the Procession of the Equinoxes." She was able to explain and simply prove how equinoxes move and then how to calculate their movement. She wrote many other articles such as "Dispute of Longitude and Stars" as well as "The Explanation of a Lunar Eclipse." She commented on the number of stars, revolving direction of the sun, the moon, and the planets Venus, Jupiter, Mars, Mercury, and Saturn as well as describing the relationship between lunar and solar eclipses. Not only did she study the research of other astronomers, but she was able to find her own original research. One of her experiments to study a lunar eclipse included placing a round table in a garden pavilion, to be a globe; she hung a crystal lamp on a cord from the ceiling beams, to be the sun. Then on one side of the table she had a round mirror as the moon. She moved these three objects as if they were the sun, earth, and moon according to astronomical principles. Her findings and observations were very accurate and recorded in her article, "The Explanation of a Solar Eclipse."

In the realm of mathematics, Zhenyi had mastered trigonometry and knew the Pythagorean theorem. She wrote an article called "The Explanation of the Pythagorean Theorem and Trigonometry," where she described a triangle and the relationship between the shorter leg of a right triangle, the long leg, and the triangle's hypotenuse all correctly. She admired the mathematician Mei Wending (1633-1721 A.D.). He was famous in the early Qing dynasty, who wrote the book Principles of Calculation. Wang Zhenyi became a master of this book and even rewrote it with simpler language and made it available to others under the title The Musts of Calculation. She was even able to simplify multiplication and division to make learning mathematics easier for beginners. She was very dedicated in her study of mathematics and even wrote a book called The Simple Principles of Calculation when she was twenty-four. Her studies were difficult and she once said, "There were times that I had to put down my pen and sighed. But I love the subject, I do not give up."