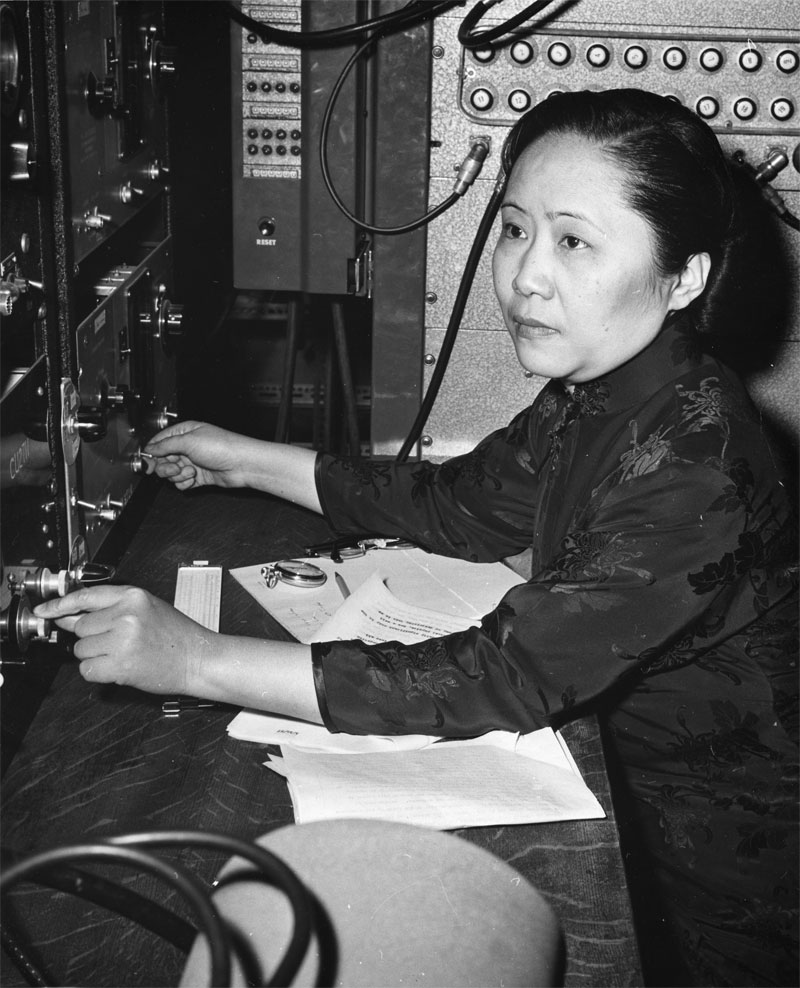 Chien-Shiung Wu was a Chinese American experimental physicist who made significant contributions in the research of radioactivity. Wu worked on the Manhattan Project, where she helped develop the process for separating uranium metal into the U-235 and U-238 isotopes by gaseous diffusion. She is best known for conducting the Wu experiment, which contradicted the Law of Conservation of Parity. This discovery earned the 1957 Nobel Prize in physics for her colleagues Tsung-Dao Lee and Chen-Ning Yang, and also earned Wu the inaugural Wolf Prize in Physics in 1978. Her expertise in experimental physics evoked comparisons to Marie Curie, and her many honorary nicknames include "the First Lady of Physics", "the Chinese Madame Curie", and the "Queen of Nuclear Research".

Wu was born in the town of Liuhe in Taicang, Jiangsu province on May 31, 1912. Her father Wu Zhongyi encouraged her to attend a class taught by Hu Shih, a leading Chinese philosopher and scholar at the time. She and her father were extremely close and he encouraged her interests passionately, creating an environment where she was surrounded by books, magazines, and newspapers. Wu left her hometown at the age of 11 to go to the Suzhou Women's Normal School No. 2. In 1929 Wu was admitted to the National Central University in Nanjing. According to the governmental regulations of the time, "normal school" (teacher-training college) students wanting to move on to the universities needed to serve as schoolteachers for one year. Hence, in 1929 Wu went to teach in the Public School of China, founded by Hu Shih in Shanghai. From 1930 to 1934, Wu studied at the National Central University, first in mathematics, but later transferring to physics. She received a BS in Physics from National Central University in Nanjing. For two years after graduation, she did graduate-level study in physics and also worked as an assistant at the Zhejiang University. After this, Wu became a researcher at the Institute of Physics of the Academia Sinica.

After completing the two years of studying physics, Wu moved to the United States in 1936. Wu decided that she wanted and needed to continue her studies in physics at a higher level than was possible in China. Therefore, she sent out applications to study at universities overseas, especially in California. Upon receiving a favorable response from the Michigan State University, Wu and her female friend, Dong Ruofen, a chemist from Taicang, embarked on the long steamship voyage from China to the United States. The two women arrived in San Francisco in 1936. Wu's plans for graduate study changed completely after visiting the University of California, Berkeley. She met physicist Luke Chia-Liu Yuan, a grandson of Yuan Shikai, the first President of the Republic of China and self-proclaimed Emperor of China. But also, Wu's achievements earned her an offer to study under Ernest Lawrence, who would soon win the Nobel Prize for Physics in 1939 for his invention of the cyclotron particle accelerator and the development of its applications in physics. Wu abandoned her plans to study at Michigan and enrolled instead at Berkeley. She made rapid progress in her education and her research, completing her Ph.D. in physics in 1940.

Wu and Yuan were married two years later, in 1942. In 1947, she gave birth to their son, Vincent Yuan, who would also grow up to become a physicist. Wu died on February 16, 1997 in New York City at the age of 84 after suffering a stroke. At the time of her death, Wu was Pupin Professor Emerita of Physics at Columbia. Wu and Yuan moved to the East Coast of the U.S., where Wu became a faculty member at, first, Smith College, then Princeton University in New Jersey for 1942?44, where she became the first female instructor in the Physics Department. Finally, she found herself at Columbia University in New York City, beginning in 1944 and continuing for many years after the war, all the way through 1980. From 1942 until 1944, Wu was a research assistant at the University of Berkeley. Wu also taught at the National Academy of Sciences in Shanghai, specifically about x-ray crystallography and in 1944 at Smith College. In 1958, Wu became a full-time professor and was elected to the National Academy of Sciences. At Columbia University, Wu also did research and development for the Manhattan Project. She helped to develop the process for separating uranium metal into the U-235 and U-238 isotopes by gaseous diffusion. This was the process that was implemented on a gigantic scale at the K-25 Plant near Oak Ridge, Tennessee, whose construction began in 1944. In 1946, she served in the Physics Department of Columbia as a research associate until 1952.

From 1952-58, Wu was an associate professor and then became a professor until she retired in 1981 as a Michael I. Pupin Professor of Physics. In her research at Columbia, Wu also worked to develop improved Geiger counters for measuring nuclear radiation levels. At Columbia Wu knew the Chinese-born theoretical physicist Tsung-Dao Lee personally. In the mid-1950s, Lee and another Chinese theoretical physicist, Chen Ning Yang, grew to question a hypothetical law in elementary particle physics, the "Law of Conservation of Parity". Their library research into experimental results convinced them that this "Law" was valid for electromagnetic interactions and for the strong nuclear force. However, it had not been tested for the weak nuclear force, and Lee and Yang's theoretical studies showed that it would probably not hold true for this kind of interaction. Lee and Yang worked out the pencil-and-paper design of several experiments for testing the "Conservation of Parity" in the laboratory. Lee then turned to Wu for her expertise in choosing and then working out the hardware manufacture, set-up, and laboratory procedures for carrying out the experiment. Wu chose to do this for an experiment that involved taking a sample of radioactive cobalt 60 and cooling to cryogenic temperatures with liquid gases. Cobalt 60 is an isotope that decays by beta particle emission, and Wu was also an expert on beta decay. The extremely low temperatures were needed to reduce the amount of thermal vibration of the cobalt atoms to practically nil. Also, Wu needed to apply a constant and uniform magnetic field across the sample of cobalt 60 in order to cause the spin axes of the atomic nuclei to all line up in the same direction. For this cryogenic work, Wu needed the expertise and the facilities of the National Bureau of Standards in liquid gases. She thus traveled to NBS headquarters in Maryland with her equipment to carry out the experiments. Lee and Yang's theoretical calculations predicted that the beta particles from the cobalt 60 atoms would be emitted asymmetrically if the hypothetical "Law of Conservation of Parity" proved invalid. Wu's experiments at the NBS showed that this is indeed the case: parity is not conserved under the weak nuclear interactions. This was also very soon confirmed by her colleagues at Columbia University in different experiments, and as soon as all of these results were published—in two different research papers in the same issue of the same physics journal—the results were also confirmed at many other laboratories and in many different experiments. The discovery of parity violation was a major contribution to high energy physics and the development of the Standard model. In recognition for their theoretical work, Lee and Yang were awarded the Nobel Prize for Physics in 1957. Wu received the first Wolf Prize in Physics in 1978 for her experimental work. Wu's book titled Beta Decay (published 1965) is still a standard reference for nuclear physicists. An additional important experiment carried out by Wu was the confirmation of the Pryce and Ward calculations on the correlation of the quantum polarizations of two photons propagating in opposite directions. This was the first experimental confirmation of quantum results relevant to a pair of entangled photons as applicable to the Einstein-Podolsky-Rosen (EPR) paradox, or situation. Wu later conducted research into the molecular changes in the deformation of hemoglobins that cause sickle-cell disease. She also did research on magnetism, and on the Mössbauer effect during the 1960s.