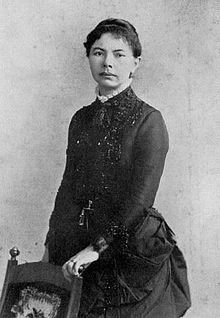 Whiting graduated from Ingham University in 1865. Whiting was appointed by Wellesley College president Henry Fowle Durant, one year after the College's 1875 opening, as its first professor of physics. She established its physics department and the undergraduate experimental physics lab at Wellesley, the second of its kind to be started in the country. At the request of Durant, she attended lectures at MIT given by Edward Charles Pickering. He invited Whiting to observe some of the new techniques being applied to astronomy, such as spectroscopy. In 1880, Whiting started teaching a course on Practical Astronomy at Wellesley.

In 1895, as told by Annie Jump Cannon: "An especially exciting moment came when the Boston morning papers reported the discovery of the Rontgen or X-rays in 1895. The advanced students in physics of those days will always remember the zeal with which Miss Whiting immediately set up an old Crookes tube and the delight when she actually obtained some of the very first photographs taken in this country of coins within a purse and bones within the flesh."

Between 1896 and 1900, Whiting helped Wellesley College trustee Sarah Elizabeth Whitin to establish the Whitin Observatory, of which Whiting became the first director. Tufts College bestowed an honorary doctorate on Whiting in 1905.

Whiting retired from Wellesley in 1916 and was a Professor Emeritus until her death in 1927. She is buried in Machpelah Cemetery in Le Roy, New York, near her now-defunct alma mater.