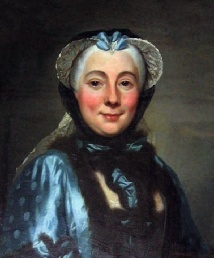 As a young child, she enjoyed sculpture and art however when she learned to write at age eight, writing books became a new interest. She told friends later in life that she hardly had an idea without a pen in her hand. At fourteen years old, Thiroux d'Arconville requested to be married to Louis Lazare Thiroux d'Arconville. The two were married on 28 February 1735. Together the couple had three sons. As a married woman, Thiroux d'Arconville enjoyed theater and opera, similar to many wealthy women. However, when she was 22, Thiroux d'Arconville suffered from a case of smallpox that left her badly scarred. After this experience she withdrew from society and spent her time studying and focusing on religion.

Thiroux d'Arconville studied English and Italian at her home and attended science classes at Jardin des Plantes, the Kings's Garden in Paris and a center of medical education that was founded in 1626 by King Louis XIII. She also often gathered well-known scientists in her home. The Garden offered courses on physics, anatomy, botany and chemistry to both men and women. It is thought that Thiroux d'Arconville took both anatomy and chemistry classes. Similar to many aristocratic women of the time, Thiroux d'Arconville also collected rare plants and stones. While she enjoyed these activities, she wanted to learn more so she set up a laboratory in her home and stocked it with chemistry equipment. She also ordered books from Bibliothèque nationale de France, the national library of France. Initially Thiroux d'Arconville worked as a botanist, she sent specimens to Jardin des Plantes. Eventually she turned to chemistry and started working under the guidance of Pierre Macquer, a professor of chemistry and pharmacology at the Garden.

Women had long been a part of the literary community in France; critics thought this indicative of the advanced French society. Scholars viewed the idea of the "woman writer" as a sign of modernity and women in society were aware of the large body of work written by female scholars; in this sense, Thiroux d'Arconville was not an anomaly. However, because of her disfiguration, she chose to withdraw from the social space of the French salons, and establish herself in the research laboratory instead.

Thiroux d'Arconville stated translating various English works, on a variety of subjects, to French. Translating works was not uncommon for women during this time period; it was a way for women to engage in scholarship. Thiroux d'Arconville often added commentary to the works she translated; however she did not put her name on these texts. As a woman scholar during this time, she faced restrictions and gender-based expectations. In her work Sur les femmes, she wrote about women "Do they show science or wit? If their works are bad, they are jeered at; if they are good, they are taken from them, and they are left only with ridicule for letting themselves be called authors".

It has been said that Thiroux d'Arconville suffered from insomnia and worked on multiple projects at a time to prevent herself from growing bored. The first text she published was Advice from a Father to his Daughter in 1756. Advice from a Father to his Daughter was a translation of a text on morality written by George Savile, 1st Marquess of Halifax. In the preface of the translation Thiroux d'Arconville discussed how unqualified governesses often raised daughters because mothers did not want to raise them.

In 1759, she translated Peter Shaw's Chemical Lectures, at the encouragement of Macquer. Thiroux d'Arconville did not hesitate to fix any errors in Shaw's work and added information on the history of practical chemistry to the beginning of Shaw's text. In discussing the history of chemistry, she started with alchemy, which she claimed was not a true science. According to her, true chemistry began with men like Johann Joachim Becher, Herman Boerhaave, Georg Ernst Stahl, Nicolas Lemery and Étienne François Geoffroy, men helped nature reveal to humanity.

Also in 1759, Thiroux d'Arconville translated Alexander Monro's Treatise on Osteology. In order to write her preface for Treatise on Osteology, Thiroux d'Arconville looked to Jean-Joseph Sue, a professor of anatomy in the royal schools of surgery and painting and a royal censor for books of surgery, for help. In the preface, recognizing the limits to her knowledge on the subject, she redirected readers to other text that provided more in depth information. She also reorganized Monro's text and added illustrations.

It is thought that the images were created under the direction of Jean-Joseph Sue with added input by Thiroux d'Arconville while being financed by her. The skeletons seemed to have been modeled after her; they had a large, broad pelvis and narrow lower limbs, thought to have been caused by corsets Thiroux d'Arconville wore throughout her life. However part of the illustration was inaccurate; the proportion of the female skull to the body was smaller than the proportion of the male skull to the body, it should have been the other way around. Since, like her other works, she remained anonymous with this text, Sue was thought to be the lone author of the text.

While working on these various texts, Thiroux d'Arconville also started studying putrefaction, or how plant and animal matter rot. She initially looked to the research of John Pringle, a military doctor who researched what makes wounds turn gangrenous. Thiroux d'Arconville thought that in order to understand putrefaction one needed to understand how matter is transformed. For ten years, she recorded the results of experiments involving rotting food under various conditions to see if putrefaction could be delayed. She found that protecting matter from air and exposing it to copper, camphor and cinchona could delay rotting. She published "Essay on the History of Putrefaction" in 1766. The book included details of over 300 experiments, painstakingly carried out. She again remained anonymous, with one reviewer writing that the author of the essay "must be a highly distinguished physician with a deep knowledge of both chemistry and medicine". In her essay she paid homage to Pringle while also emphasizing the differences between their findings; she disagreed with Pringle in that he thought chamomile could delay rotting but she found that it did not. In the essay, Thiroux d'Arconville remarked that her work might have enhanced Pringle's text and that she was very careful when she conducted her experiments. She also discussed her reasons for going into the field of putrefaction, saying it was because the field was not well explored and society would benefit from learning more about it. Thiroux d'Arconville's reasons for studying putrefaction were reflective of the ideologies of the eighteenth century. During this time, the benefits that society could gain from more knowledge about a certain subject were heavily emphasized. Women were responsible for gaining knowledge in order to pass that knowledge down and better educate the next generation. So Thiroux d'Arconville's desire to study putrefaction to better society would have been accepted during this time.