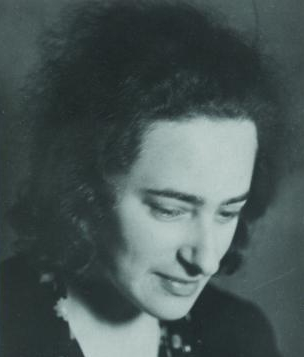 Olga Taussky-Todd was an Austrian and later Czech-American mathematician. She is famous for her more than 300 research papers in algebraic number theory, integral matrices, and matrices in algebra and analysis.

Olga Taussky was born into a Jewish family in what is now Olomouc, Czech Republic, on August 30, 1906. Her father, Julius David Taussky, was an industrial chemist and her mother, Ida Pollach, was a housewife. She was the second of three children. At the age of three, her family moved to Vienna and lived there until the middle of World War I. Later Taussky's father accepted a position as director of a vinegar factory at Linz in Upper Austria. At a young age, Taussky displayed a keen interest in mathematics. After her father died during her last year at school, she worked through the summer at her father's vinegar factory and was pressured by her family to study chemistry in order to take over her father's work. Once her older sister qualified in chemistry and took over her father's work, however, Taussky became free to study mathematics when she enrolled at the University of Vienna in the fall of 1925.

Taussky worked first in algebraic number theory, with a doctorate at the University of Vienna supervised by Philipp Furtwängler, a famous number theoretician from Germany. During that time in Vienna she also attended the meetings of the Vienna Circle.

Taussky is most well known for her work in matrix theory (in particular the computational stability of complex matrices) algebraic number theory, group theory, and numerical analysis.

According to Gian-Carlo Rota, as a young mathematician she was hired by a group of German mathematicians to find and correct the many mathematical errors in the works of David Hilbert, so that they could be collected into a volume to be presented to him on his birthday. There was only one paper, on the continuum hypothesis, that she was unable to repair.

Later, she started to use matrices to analyze vibrations of airplanes during World War II, at the National Physical Laboratory in the United Kingdom. During this time she wrote several articles that were published by the Ministry of Aircraft Production in London. She later described herself as a torchbearer for matrix theory.

In 1935, she moved to England and became a Fellow at Girton College, Cambridge University, as well as at Bryn Mawr College. Soon after, in 1938, she married the British mathematician John Todd (1911-2007), a colleague at the University of London.

In 1945 the Todds emigrated to the United States and worked for the National Bureau of Standards. In 1957 she and her husband both joined the faculty of California Institute of Technology (Caltech) in Pasadena, California. She also supervised Caltech's first female Ph.D. in Math, Lorraine Foster. Taussky retired from teaching in 1977, but continued her correspondence with other mathematicians regarding her work in matrix theory.

She was a Fellow of the AAAS, a Noether Lecturer and a recipient of the Austrian Cross of Honour for Science and Art, 1st class (1978). In 1993, the International Linear Algebra Society established a lecture series to honor the contributions to the field of linear algebra made by Taussky-Todd and her husband.