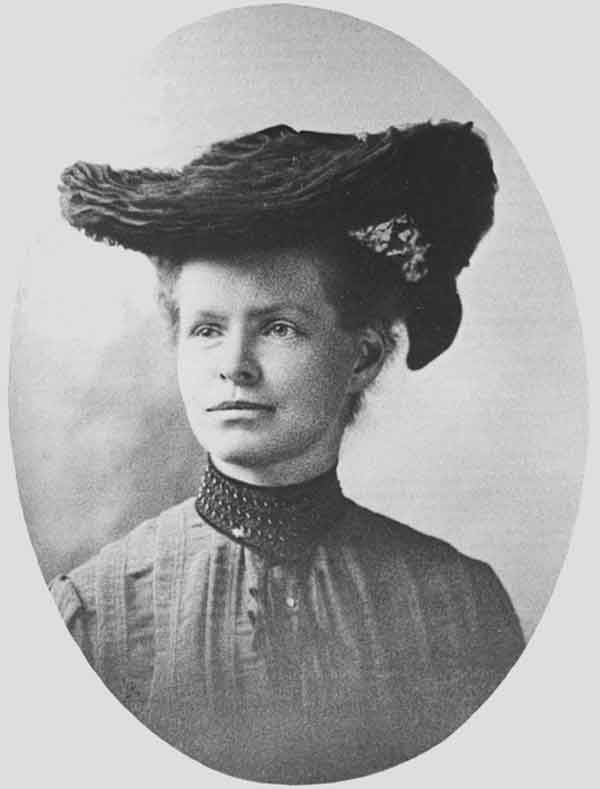 Nettie Maria Stevens was an early American geneticist. In 1906, she discovered that male beetles produce two kinds of sperm, one with a large chromosome and one with a small chromosome. When the sperm with the large chromosome fertilized eggs, they produced female offspring, and when the sperm with the small chromosome fertilized eggs, they produced male offspring. This pattern was observed in other animals, including humans, and became known as the XY sex-determination system.

Nettie Maria Stevens was born on July 7, 1861, in Cavendish, Vermont, to Julia and Ephraim Stevens. After the death of her mother, her father remarried and the family moved to Westford, Massachusetts. She was graduated from Westford Academy in 1880.

Stevens taught high school and was a librarian. Her teaching duties included courses in physiology and zoology, as well as mathematics, Latin, and English. Her interest in zoology may have been influenced by taking a teacher training course she attended on Martha's Vineyard in the 1890s.

After teaching for three terms, she continued her education at Westfield Normal School (now Westfield State University) completing the four-year course in only two years and being graduated with the highest scores in her class.

After graduation at the top in her class, she attended Stanford University, where she received her B.A. in 1899 and her M.A. in 1900. She also completed one year of graduate work in physiology under Professor Jenkins and histology and cytology under Professor McFarland. Stevens continued her studies in cytology at Bryn Mawr College, where she obtained her Ph.D. and was influenced by the work of the previous head of the biology department, Edmund Beecher Wilson, and by that of his successor, Thomas Hunt Morgan.[5] Her work documented processes that were not researched by Wilson and she used subjects that he later would adopt along with the results of her work.

In her first year at Bryn Mawr, Stevens received a graduate scholarship in biology. The following year, she was named a President's European Fellow, and studied at the University of Würzburg, Germany. She also studied marine organisms at Helgoland and Naples Zoological Station. After receiving her Ph.D. from Bryn Mawr, Stevens was given an assistantship at the Carnegie Institute of Washington in the year 1904–1905. Several subsequent studies of germ cells in aphids appeared as a result. One paper (1905) won Stevens an award of $1,000 for the best scientific paper written by a woman. Another work, "Studies in Spermatogenesis," highlighted her entry into the increasingly promising focus of sex-determination studies and chromosomal inheritance. It was at this institute that Stevens had her sex determination work published as a report in 1905. At Bryn Mawr, Stevens focused on topics such as the regeneration in primitive multicellular organisms, the structure of single cell organisms, the development of sperm and eggs, germ cells of insects, and cell division in sea urchins and worms. In 1908, Stevens received the Alice Freeman Palmer Fellowship from the Association of Collegiate Alumnae, now the American Association of University Women. During her fellowship year, Stevens studied at the Naples Zoological Station and the University of Wurzburg, in addition to visiting laboratories throughout Europe.

Stevens was one of the first American women to be recognized for her contribution to science. Her research was completed at Bryn Mawr College. Her highest rank attained was the associate in experimental morphology (1905–1912). Using observations of insect chromosomes she discovered that, in some species, chromosomes are different among the sexes. The discovery was the first time that observable differences of chromosomes could be linked to an observable difference in physical attributes (i.e., whether an individual is male or female). This work was done in 1905. The experiments completed to determine this used a range of insects. She identified the Y chromosome in the mealworm, Tenebrio. She deduced that the chromosomal basis of sex depended on the presence or absence of the Y chromosome. She did not start her research until her thirties and completed her Ph.D. in 1903. She successfully expanded the fields of genetics, cytology, and embryology.

Stevens failed to gain a full regular university position, however, she achieved a research career at leading marine stations and laboratories. Her record of 38 publications includes several major contributions which further the emergence of ideas of chromosomal heredity. As a result of her research, Stevens provided critical evidence for Mendelian and chromosomal theories of inheritance.

Stevens worked to be able to become a full researcher at Bryn Mawr, however, before she could take the research professorship offered to her, she died on May 4, 1912, of breast cancer at Johns Hopkins Hospital.

Following her death, Thomas Hunt Morgan wrote an extensive obituary for the journal Science. In an earlier letter of recommendation he wrote, "Of the graduate students that I have had during the last twelve years I have had no one that was as capable and independent in research as Miss Stevens."

Studying egg tissue and fertilization process, Stevens was the first to recognize that females have two large sex chromosomes in the shape of Xs and that males have one of full size X and another that is missing a portion, making it resemble a Y. Wilson performed tests only on the testes as eggs were too fatty for his staining procedures. After her discoveries, Wilson reissued his original paper and acknowledged Stevens for this finding.

Stevens at Bryn Mawr was breeding Drosophila melanogaster in the laboratory as subjects of her research some years before Morgan adopted it as his model organism.

At 50 years old, and only 9 years after completing her Ph.D., Stevens died of breast cancer on May 4, 1912 in Baltimore, Maryland. Her career span was short, but she published approximately 40 papers. Nettie Maria Stevens was buried in the Westford, Massachusetts, cemetery alongside the graves of her father, Ephraim, and her sister, Emma.