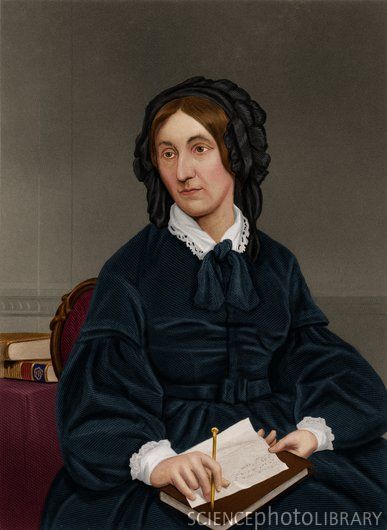 Mary Fairfax Somerville was a Scottish science writer and polymath, at a time when women's participation in science was discouraged. She studied mathematics and astronomy, and was nominated to be jointly the first female member of the Royal Astronomical Society at the same time as Caroline Herschel.

She was the daughter of Irish Vice-Admiral Sir William George Fairfax (scion of a distinguished family of Fairfaxes), and was related to several prominent Scottish houses through her mother. She was born at the manse of Jedburgh, in the Borders, the house of her mother's sister, wife of Dr Thomas Somerville (1741–1830), author of My Own Life and Times. Her childhood home was at Burntisland, Fife. Returning from sea, her father considered the 10-year-old Mary "a savage" and sent her for a year of tuition at Musselburgh, an expensive boarding school. She returned being able to read, and able to write, albeit poorly; she could perform simple arithmetic and knew a little French. Following this, she was informally taught elementary geography and astronomy, but found her education limited compared to what her brother might receive. To supplement this, therefore, she was taught Latin by her uncle, Dr Thomas Somerville, who described her as an eager student. Once, listening in to her brother receive tutoring in mathematics, she answered when he could not; impressed, his tutor allowed her to continue with lessons unofficially.

She also studied art with Alexander Nasmyth in Edinburgh, who taught her about perspective – inspired, she managed to obtain a copy of Euclid's Elements of Geometry, and began to teach herself from it. Meanwhile, she continued in the traditional roles of the daughter of a well-connected family, attending social events and maintaining a sweet and polite manner – she was nicknamed "the Rose of Jedburgh" among Edinburgh socialites. Around this time, however, following the death of her sister at age ten, her parents forbade Mary from further study, believing it had contributed to her sister's death. This did not deter her from studying on her own, although she had to continue in secret.

In 1804 she married her distant cousin, the Russian Consul in London, Captain Samuel Greig, son of Admiral Samuel Greig. They had two children, one of whom, Woronzow Greig, became a barrister and scientist. They lived in London, and it was not a happy time for Somerville – although she could study more easily, her husband did not think much of women's capacity to pursue academic interests. She returned home to Scotland upon his death in 1807. Her inheritance from Greig gave her the freedom to pursue intellectual interests.

In 1812 she married another cousin, Dr William Somerville (1771–1860), inspector of the Army Medical Board, who encouraged and greatly aided her in the study of the physical sciences. They had four children. During her marriage she made the acquaintance of the most eminent scientific men of the time, among whom her talents had attracted attention. Before she had acquired general fame, Laplace told her, "There have been only three women who have understood me. These are yourself, Mrs Somerville, Caroline Herschel and a Mrs Greig of whom I know nothing" (of course, Somerville was first and third of these three). Having been requested by Lord Brougham to translate for the Society for the Diffusion of Useful Knowledge the "Mécanique Céleste" of Laplace, she greatly popularized its form, and its publication in 1831, under the title of The Mechanism of the Heavens, at once made her famous. She stated "I translated Laplace's work from algebra into common language". Her other works are the On the Connexion of the Physical Sciences (1834), Physical Geography (1848), which was commonly used as a text book until the early 20th century, and Molecular and Microscopic Science (1869).

In 1835, she and Caroline Herschel became the first women members of the Royal Astronomical Society. In 1838 she and her husband went to Italy, where she spent much of the rest of her life. In 1868, four years before her death at age 91, she signed John Stuart Mill's unsuccessful petition for female suffrage. Much of the popularity of her writings was due to her clear and crisp style and the underlying enthusiasm for her subject which pervaded them. From 1835 she received a pension of £300 from government. In 1869 she was awarded the Victoria Medal of the Royal Geographical Society. Somerville's writing influenced James Clerk Maxwell and John Couch Adams. Her discussion of a hypothetical planet perturbing Uranus, in the 6th edition of On the Connexion of the Physical Sciences (1842), led Adams to look for and discover Neptune.

She died at Naples on 28 November 1872, and was buried there in the English Cemetery, Naples although her remains were later moved. In the following year there appeared her autobiographical Personal Recollections, consisting of reminiscences written during her old age, and of great interest both for what they reveal of her own character and life and the glimpses they afford of the literary and scientific society of bygone times. Somerville College, Oxford, was named after Mary Somerville, as is Somerville House, Burntisland, where she lived for a time and Somerville House, a high school for girls in Brisbane, Australia. One of the Committee Rooms of the Scottish Parliament in Edinburgh has been named after her. The term "scientist" was coined by William Whewell in an 1834 review of her On the Connexion of the Sciences. Somerville Island (74°44'N, 96°10'W), a small island in Barrow Strait, Nunavut, was named after her by Sir William Edward Parry in 1819 during the first of the four Arctic expeditions under his command. 5771 Somerville (1987 ST1) is a main-belt asteroid discovered on 21 September 1987 by E. Bowell at Lowell Observatory Flagstaff, Arizona, and named for her. Somerville crater is a small lunar crater in the eastern part of the Moon. It lies to the east of the prominent crater Langrenus, and was designated Langrenus J before being given her name by the International Astronomical Union. It is one of a handful of lunar craters named after a woman.