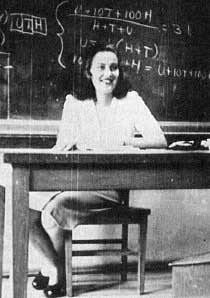 Mary Ellen Rudin was an American mathematician known for her work in set-theoretic topology. Mary Ellen (Estill) Rudin was born in Hillsboro, Texas to Joe Jefferson Estill and Irene (Shook) Estill. Her mother Irene was an English teacher before marriage, and her father Joe was a civil engineer. The family moved with her father's work, but spent a great deal of Mary Ellen's childhood around Leakey, Texas. She had one sibling, a younger brother. Both of Rudin's maternal grandmothers had attended Mary Sharp College near their hometown of Winchester, Tennessee. Rudin remarks on this legacy and how much her family valued education in an interview.

She attended the University of Texas, completing her B.A. in 1944 after just three years before moving into the graduate program in mathematics under Robert Lee Moore. Her graduate thesis presented a counterexample to one of "Moore's axioms". She completed her Ph.D. in 1949. During her time as an undergraduate, she was a member of the Phi Mu Women's Fraternity, and was elected to the Phi Beta Kappa society. In 1953, she married mathematician Walter Rudin, whom she met while teaching at Duke University. They had four children.

Rudin is best known in topology for her constructions of counterexamples to well-known conjectures. Most famously, she was the first to construct a ZFC Dowker space, thus disproving a conjecture of Dowker's that had stood, and helped drive topological research, for more than twenty years. Her example fuelled the search for "small" ZFC Dowker spaces. She also proved the first Morita conjecture and a restricted version of the second. Her last major result was a proof of Nikiel's conjecture.

"Reading the articles of Mary Ellen Rudin, studying them until there is no mystery takes hours and hours; but those hours are rewarded, the student obtains power to which few have access. They are not hard to read, they are just hard mathematics, that's all." (Steve Watson)