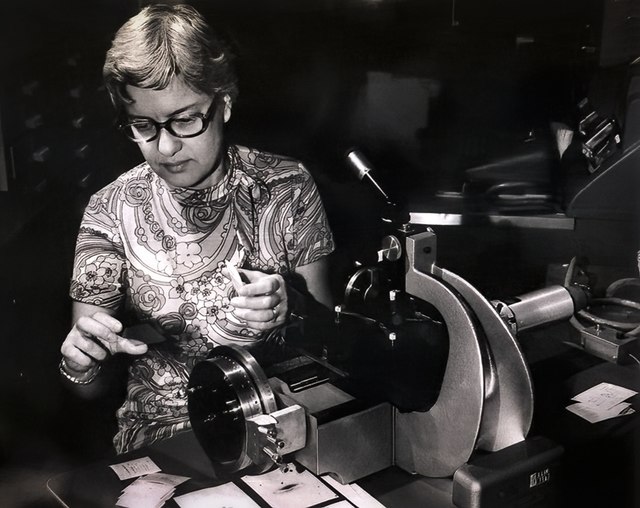 Vera Rubin was an American astronomer who pioneered work on galaxy rotation rates. She uncovered the discrepancy between the predicted angular motion of galaxies and the observed motion, by studying galactic rotation curves. This phenomenon became known as the galaxy rotation problem.

Vera Rubin was born in Philadelphia and lived in Washington, D.C. when she was 10 years old. It was in Washington, D.C. that she started to develop an interest in astronomy. Vera Rubin's father, Philip Cooper, was an electrical engineer, born in Vilnius, Lithuania as Pesach Kobchefski. Her mother, Rose Applebaum, originally came from Bessarabia, and worked for Bell Telephone Company calculating mileage for telephone lines. Rubin has an older sister named Ruth Cooper Burg, who was an administrative judge in the United States Department of Defense.

Rubin earned her BA degree at Vassar College and attempted to enroll at Princeton but never received their graduate catalog, as women there were not allowed in the graduate astronomy program until 1975. She instead enrolled for her Master's degree at Cornell University, where she studied physics under Philip Morrison, Richard Feynman, and Hans Bethe. She completed her study in 1951, during which she made one of the first observations of deviations from the Hubble flow in the motions of galaxies. She argued that galaxies might be rotating around unknown centers, rather than simply moving outwards, as suggested by the Big Bang theory at that time. The presentation of these ideas was not well received. Rubin’s doctoral work at Georgetown University was conducted under advisor George Gamow. Her PhD thesis upon graduation in 1954 concluded that galaxies clumped together, rather than being randomly distributed through the universe. The idea that clusters of galaxies existed was not pursued seriously by others until two decades later.

After her graduation, Rubin taught at Montgomery County Junior College, and also worked at Georgetown University as a research assistant, and in 1962 became an assistant professor there. Also in 1965, she became the first woman allowed to use the instruments at the Palomar Observatory. Prior to this, women had not been authorized to access the facilities. In 1965 she also secured a position at the Department of Terrestrial Magnetism at the Carnegie Institution of Washington and has worked there as an astronomer since that time. Rubin is currently a Senior Fellow at the DTM, and her work area is described as "Galactic and extragalactic dynamics; large-scale structure and dynamics of the universe."

Since 1978, Vera has researched and analyzed over 200 galaxies. Rubin began work which was close to the topic of her previously controversial thesis regarding galaxy clusters, with instrument maker Kent Ford, making hundreds of observations. The Rubin–Ford effect is named after them, and has been the subject of intense discussion ever since it was reported. It describes the motion of the Milky Way relative to a sample of galaxies at distances of about 150 to 300 Mly, and suggests that it is different from the Milky Way's motion relative to the cosmic microwave background radiation. Wishing to avoid controversy, Rubin moved her area of research to the study of rotation curves of galaxies, commencing with the Andromeda Galaxy. She pioneered work on galaxy rotation rates, and uncovered the discrepancy between the predicted angular motion of galaxies and the observed motion, by studying galaxy rotation curves. Galaxies are rotating so fast that they would fly apart, if the gravity of their constituent stars was all that was holding them together. But they are not flying apart, and therefore, a huge amount of unseen mass must be holding them together. This phenomenon became known as the galaxy rotation problem. Her calculations showed that galaxies must contain at least ten times as much dark mass as can be accounted for by the visible stars. Attempts to explain the galaxy rotation problem led to the theory of dark matter. In the 1970s Rubin obtained the strongest evidence up to that time for the existence of dark matter. The nature of dark matter is as yet unknown, but its presence is crucial to understanding the future of the universe. The existence of dark matter jointly explains galaxy rotation curves, the motion of galaxies within galaxy clusters, patterns of gravitational lensing, and the distribution of mass in systems such as the Bullet Cluster. Alternative MOND (Modified Newtonian Dynamics) models for galaxy rotation curves have been excluded. Rubin has expressed disappointment about this result, stating "If I could have my pick, I would like to learn that Newton's laws must be modified in order to correctly describe gravitational interactions at large distances. That's more appealing than a universe filled with a new kind of sub-nuclear particle."