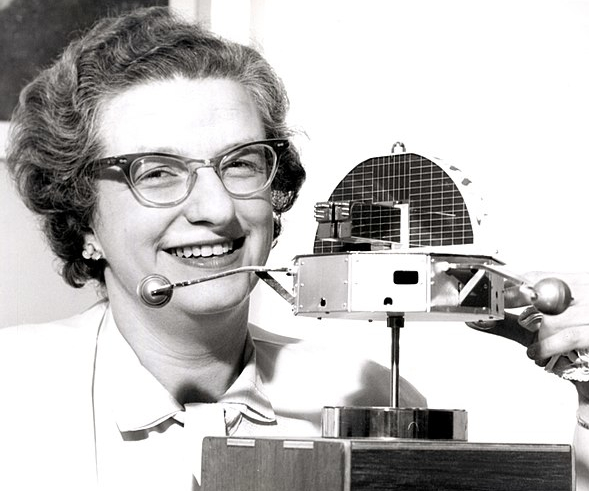 Nancy Grace Roman is an American astronomer who was one of the first female executives at NASA. She is known to many as the "Mother of Hubble" for her role in planning the Hubble Space Telescope. Throughout her career, Roman has also been an active public speaker and educator, and an advocate for women in the sciences.

Roman was born in Nashville, Tennessee to music teacher Georgia Smith Roman and geophysicist Irwin Roman. Because of her father’s work, the family relocated to Oklahoma soon after Roman's birth. Roman and her parents moved to Houston, New Jersey, and to Michigan and Nevada later on. After 1955, she lived in Washington, DC. Roman considered her parents to be major influences in her interest in science. Outside of her work Roman enjoyed going to lectures and concerts and was active in the American Association of University Women.

When Roman was eleven years old she showed interest in astronomy by forming an astronomy club among her classmates in Nevada. She and her classmates got together and learned about constellations from books once a week. Although discouraged by those around her, Roman knew by the time she was in high school that she wanted to pursue her passion for astronomy. She attended Western High School in Baltimore where she participated in an accelerated program and graduated in three years.

Roman attended Swarthmore College in 1946 where she received her Bachelor of Arts in Astronomy. While she studied there, she worked at the Sproul Observatory. After this she went on to receive her PhD in the same field at the University of Chicago in 1949. She stayed at the university for six more years working at the Yerkes Observatory, sometimes traveling to the McDonald Observatory in Texas to work as a research associate with W.W. Morgan. The research position was not permanent so Roman became an instructor and later an assistant professor. Roman eventually left her job at the university because of the difficulty for a woman at the time to receive tenure for a research position. Roman continued to be involved with her alma maters as she worked on the Board of Managers for Swarthmore College from 1980 to 1988.

Whilst working at Yerkes Observatory of the University of Chicago, Roman observed the star AG Draconis and serendipitously discovered that its emission spectrum had completely changed since earlier observations. She later credited the publication of that discovery as a stroke of luck that substantially raised her profile within the astronomical community, contributing to her career progression.

After leaving the University of Chicago, Roman went to the Naval Research Laboratory and entered the radio astronomy program. Roman’s work at the NRL included using nonthermal radio source spectra and doing geodetic work. In the program she became the head of the microwave spectroscopy section.

At a lecture by Harold Urey, Roman was approached by Jack Clark who asked if she knew someone interested in creating a program for space astronomy at NASA. She interpreted that as an invitation to apply, and was the one who accepted the position. Roman was the first Chief of Astronomy in NASA's Office of Space Science, setting up the initial program; she was the first woman to hold an executive position at the space agency. Part of her job was traveling the country and speaking at astronomy departments, where she discussed the fact that the program was in development. Roman also was looking to find out what other astronomers wanted and educate them on the advantages of observing from space. She was chief of astronomy and solar physics at NASA from 1961 to 1963. She held various other positions in NASA, including Chief of Astronomy and Relativity.

During her employment at NASA, Roman developed and budgeted various programs, and organized their scientific participation. She was involved in launching three Orbiting Solar Observatories and three Small Astronomical Satellites. These satellites used ultraviolet and x-ray technology for observing the sun, space and sky. She also oversaw the launches of other Orbiting Astronomical Observatories that used optical and ultraviolet measurements, working with Dixon Ashworth. Her other launches included four Geodetic satellites. She planned for other smaller programs such as the Astronomy Rocket Program, High Energy Astronomy Observatories, the Scout Probe to measure the relativistic gravity redshift and other experiments on Spacelab, Gemini, Apollo and Skylab. Roman worked with Jack Holtz, too, on the Small Astronomy Satellite and Don Burrowbridge on Space Telescope.

The last program in which she set up the committee and with which she was highly involved was the Hubble Telescope. Roman was very involved with the early planning and specifically the setting up of the program's structure. Because of her contribution she is often called the “Mother of Hubble." NASA’s current chief astronomer, who worked with Roman at the agency, calls her “the mother of the Hubble Space Telescope.” “Which is often forgotten by our younger generation of astronomers who make their careers by using Hubble Space Telescope," says Ed Weiler. "Regretfully, history has forgotten a lot in today’s Internet age, but it was Nancy in the old days before the Internet and before Google and e-mail and all that stuff, who really helped to sell the Hubble Space Telescope, organize the astronomers, who eventually convinced Congress to fund it.”

After working for NASA for twenty-one years, she continued, until 1997, her work for contractors who supported the Goddard Space Flight Center. Roman was also a consultant for ORI, Inc. from 1980 to 1988.

Roman faced the problems of being a woman in the sciences in the mid twentieth century like most other women. She was discouraged from going into astronomy by people around her and was one of very few women in NASA at the time, being the only female with an executive position. She attended courses called "Women in Management" in Michigan and at Penn State to learn about issues regarding being a woman in a management position. However, Roman stated in an interview in 1980 that the courses were dissatisfying and addressed women’s interests rather than women’s problems.

One of Nancy Roman’s earliest publications was in 1955, after her work in the Yerkes and McDonald Observatories, in the Astrophysical Journal: Supplemental Series and was a catalog of high velocity stars. She documented new “spectral types photoelectric magnitudes and colors and spectroscopic parallaxes for about 600 high-velocity stars.” Then in 1959, Roman wrote a paper on the detection of extraterrestrial planets. Roman also discovered that stars made of hydrogen and helium move faster than stars composed of other heavier elements. One of her other discoveries was finding that not all stars that were common were the same age. This was proven by comparing hydrogen lines of the low dispersion spectra in the stars. She noticed that the stars with the stronger lines moved closer to the center of the Milky Way and the others moved in more elliptical patterns off of the plane of the galaxy. She also did research and published on the subjects of locating constellations from its 1875.0 position explaining how she found this and a paper on the Ursa Major Group for her thesis.