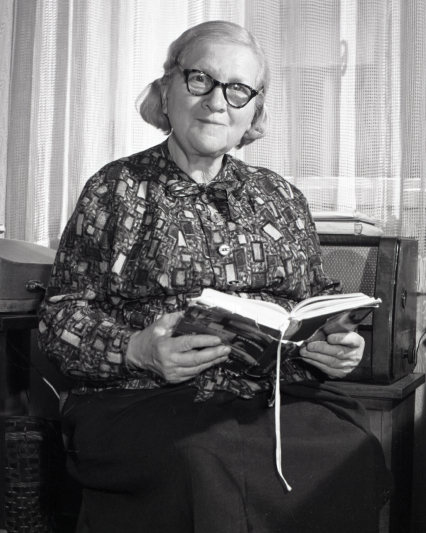 Rózsa Péter, born Rózsa Politzer, was a Hungarian mathematician and logician. She is best known as the "founding mother of recursion theory".

Péter was born in Budapest, Hungary, as Rózsa Politzer. She attended Pázmány Péter University (now Eötvös Loránd University), originally studying chemistry but later switching to mathematics. She attended lectures by Lipót Fejér and József Kürschák. While at university, she met László Kalmár; they would collaborate in future years and Kalmár encouraged her to pursue her love of mathematics.

After graduating in 1927, Péter could not find a permanent teaching position although she had passed her exams to qualify as a mathematics teacher. Due to the effects of the Great Depression, many university graduates could not find work and Péter began private tutoring. At this time, she also began her graduate studies.

Initially, Péter began her graduate research on number theory. Upon discovering that her results had already been proven by the work of Robert Carmichael and L. E. Dickson, she abandoned mathematics to focus on poetry. However, she was convinced to return to mathematics by her friend, László Kalmár, who suggested she research the work of Kurt Gödel on the theory of incompleteness. She prepared her own, different proofs to Gödel's work.

In 1937, she was appointed as contributing editor of the Journal of Symbolic Logic.

After the passage of the Jewish Laws of 1939 in Hungary, Péter was forbidden to teach because of her Jewish origin and was briefly confined to a ghetto in Budapest. During World War II, she wrote her book "Playing with Infinity: Mathematical Explorations and Excursions", a work for lay readers on the topics of number theory and logic. Originally published in Hungarian, it has been translated into English and at least a dozen other languages.

With the end of the war in 1945, Péter received her first full-time teaching appointment at the Budapest Teachers Training College. In 1952, she was the first Hungarian woman to be made an Academic Doctor of Mathematics. After the College closed in 1955, she taught at Eötvös Loránd University until her retirement in 1975. She was a popular professor, known as "Aunt Rózsa" to her students.

In 1951, she published her key work, Recursive Functions (Rekursive Funtionen). She continued to publish important papers on recursive theory throughout her life. In 1959 she presented a major paper "Über die Verallgemeinerung der Theorie der rekursiven Funktionen für abstrakte Mengen geeigneter Struktur als Definitionsbereiche" to the International Symposium in Warsaw (later published in two parts in 1961 and 1962).

Beginning in the mid-1950s, Péter applied recursive function theory to computers. Her final book, published in 1976, was "Recursive Functions in Computer Theory". Originally published in Hungarian, it was the second Hungarian mathematical book to be published in the Soviet Union because its subject matter was considered indispensable to the theory of computers. It was translated into English in 1981.

Péter was awarded the Kossuth Prize in 1951. She received the Manó Beke Prize by the János Bolyai Mathematical Society in 1953, the Silver State Prize in 1970, and the Gold State Prize in 1973. In 1973, she became the first woman to be elected to the Hungarian Academy of Sciences.