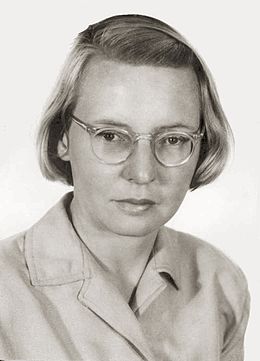 Ruby Violet Payne-Scott was an Australian pioneer in radiophysics and radio astronomy, and was the first female radio astronomer.

Payne-Scott was born on 28 May 1912 in Grafton, New South Wales, the daughter of Cyril Payne-Scott and his wife Amy (née Neale). She later moved to Sydney to live with her aunt. She attended the Penrith Public Primary School from 1921 to 1924. She attended the Cleveland-Street Girls High School in Sydney from 1925 to 1926. She completed secondary schooling at Sydney Girls High School. Her school Leaving Certificate included honours in mathematics and botany.

One of the more outstanding physicists Australia has ever produced and one of the first people in the world to consider the possibility of radio astronomy, and thereby responsible for what is now a fundamental part of the modern lexicon of science, she was often the only woman in her classes at the University of Sydney.

In 1936 she conducted research with William H. Love at the Cancer Research Laboratory at the University of Sydney. They determined that the magnetism of the earth had little or no effect on the vital processes of beings living on the earth by cultivating chick embryos with no observable differences despite being in magnetic fields up to 5000 times as powerful as that of the earth. Some decades earlier it was a widely held belief that the earth's magnetic field produced extensive effects on human beings, and many people would sleep only with the head to the north and the body parallel to the magnetic meridian.

Her career arguably reached its zenith while working for the Australian government's Commonwealth Scientific and Industrial Research Organisation (then called CSIR, now known as CSIRO) at Dover Heights, Hornsby and especially Potts Hill in Sydney. Some of her fundamental contributions to solar radio astronomy came at the end of this period. She is the discoverer of Type I and Type III bursts[14] and participated in the recognition of Type II and IV bursts. Payne-Scott played a major role in the first-ever radio astronomical interferometer observation from 26 January 1946, when the sea-cliff interferometer was used to determine the position and angular size of a solar burst. This observation occurred at either Dover Heights (ex Army shore defence radar) or at Beacon Hill, near Collaroy on Sydney's north shore (ex Royal Australian Air Force surveillance radar establishment – however this radar did not become active until early 1950).

During World War II, she was engaged in top secret work investigating radar. She was the expert on the detection of aircraft using PPI (Plan Position Indicator) displays. She was also at the time a member of the Communist Party and an early advocate for women's rights. The Australian Security Intelligence Organisation (ASIO) was interested in Payne-Scott and had a substantial file on her activities, with some distortions.

Ruby Payne-Scott and William ("Bill") Holman Hall secretly married in 1944; at this time, the Commonwealth government had legislated for a marriage bar specifying that married woman could not hold a permanent position within the public service. She continued to work for CSIRO while secretly married until the regulations of the new CSIRO in 1949 raised the issue of her marriage. The following year, her treatment by CSIRO resulted in hostile written exchanges with Sir Ian Clunies Ross (Chairman of CSIRO) about the status of married women in the work place. She lost her permanent position in CSIRO. However, her salary was maintained at a level comparable to that of her male colleagues. In 1951, she resigned a few months before her son Peter was born; there was no maternity leave at this time.

She changed her name to Ruby Hall only after she left CSIRO. Ruby and Bill Hall had two children: Peter Gavin Hall, a mathematician working in theoretical statistics and probability theory, and Fiona Margaret Hall, one of Australia's more prominent artists, whose career is described by Julie Ewington in her 2005 book Fiona Hall.

Ruby Payne-Scott died in Mortdale, New South Wales, 25 May 1981, three days short of her 69th birthday. She suffered from Alzheimer's disease in the last years of her life. In 2018 the New York Times wrote a belated obituary for her.