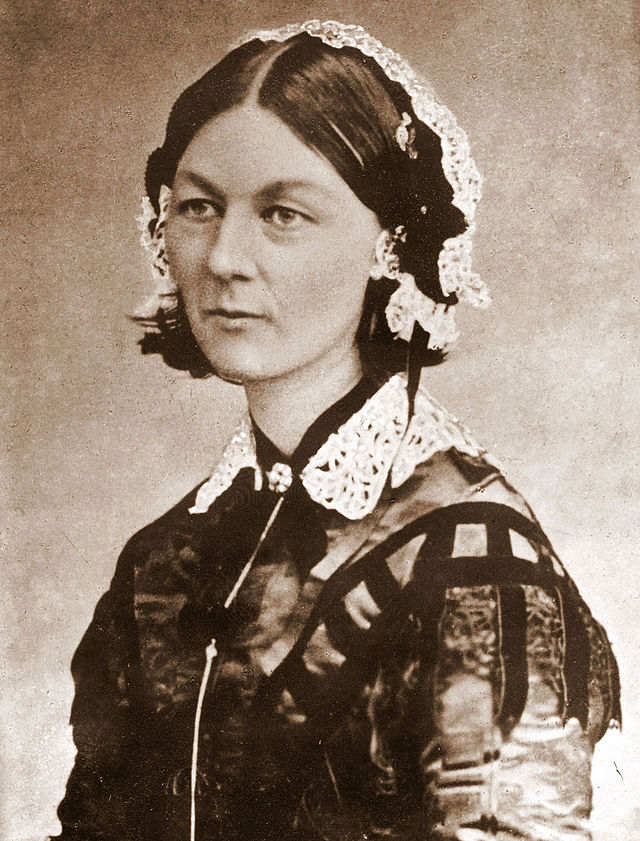 Florence Nightingale was a celebrated English social reformer and statistician, and the founder of modern nursing. She came to prominence while serving as a nurse during the Crimean War, where she tended to wounded soldiers. She was known as "The Lady with the Lamp" after her habit of making rounds at night. In 1860, Nightingale laid the foundation of professional nursing with the establishment of her nursing school at St Thomas' Hospital in London. It was the first secular nursing school in the world, now part of King's College London. The Nightingale Pledge taken by new nurses was named in her honor, and the annual International Nurses Day is celebrated around the world on her birthday.

Her social reforms include improving healthcare for all sections of British society, improving healthcare and advocating better hunger relief in India, helping to abolish laws regulating prostitution that were over-harsh to women, and expanding the acceptable forms of female participation in the workforce. Nightingale was a prodigious and versatile writer. In her lifetime much of her published work was concerned with spreading medical knowledge. Some of her tracts were written in simple English so that they could easily be understood by those with poor literary skills.

She also helped popularize the graphical presentation of statistical data. Much of her writing, including her extensive work on religion and mysticism, has only been published posthumously. Florence Nightingale exhibited a gift for mathematics from an early age and excelled in the subject under the tutorship of her father. Later, Nightingale became a pioneer in the visual presentation of information and statistical graphics. She used methods such as the pie chart, which had first been developed by William Playfair in 1801. While taken for granted now, it was at the time a relatively novel method of presenting data.

Indeed, Nightingale is described as "a true pioneer in the graphical representation of statistics", and is credited with developing a form of the pie chart now known as the polar area diagram, or occasionally the Nightingale rose diagram, equivalent to a modern circular histogram, to illustrate seasonal sources of patient mortality in the military field hospital she managed. Nightingale called a compilation of such diagrams a "coxcomb", but later that term would frequently be used for the individual diagrams. She made extensive use of coxcombs to present reports on the nature and magnitude of the conditions of medical care in the Crimean War to Members of Parliament and civil servants who would have been unlikely to read or understand traditional statistical reports.

In 1859, Nightingale was elected the first female member of the Royal Statistical Society. She later became an honorary member of the American Statistical Association. "Diagram of the causes of mortality in the army in the East" by Florence Nightingale. Nightingale made a comprehensive statistical study of sanitation in Indian rural life and was the leading figure in the introduction of improved medical care and public health service in India. In 1858 and 1859, she successfully lobbied for the establishment of a Royal Commission into the Indian situation. Two years later, she provided a report to the commission, which completed its own study in 1863. "After 10 years of sanitary reform, in 1873, Nightingale reported that mortality among the soldiers in India had declined from 69 to 18 per 1,000". The Royal Sanitary Commission of 1868-9 presented Nightingale with an opportunity to press for compulsory sanitation in private houses. She lobbied the minister responsible, James Stansfeld, to strengthen the proposed Public Health Bill to require owners of existing properties to pay for connection to mains drainage. The strengthened legislation was enacted in the Public Health Acts of 1874 and 1875.

At the same time she combined with the retired sanitary reformer Edwin Chadwick to persuade Stansfeld to devolve powers to enforce the law to Local Authorities, eliminating central control by medical technocrats. Her Crimean War statistics had convinced her that non-medical approaches were more effective given the state of knowledge at the time. Historians now believe that both drainage and devolved enforcement played a crucial role in increasing average national life expectancy by 20 years between 1871 and the mid-1930s during which time medical science made no impact on the most fatal epidemic diseases. While better known for her contributions in the nursing and mathematical fields, Nightingale is also an important link in the study of English feminism.

During 1850 and 1852, she was struggling with her self-definition and the expectations of an upper-class marriage from her family. As she sorted out her thoughts, she wrote Suggestions for Thought to Searchers after Religious Truth. This was an 829-page, three-volume work, which Nightingale had printed privately in 1860, but which until recently was never published in its entirety. An effort to correct this was made with a 2008 publication by Wilfrid Laurier University, as volume 11 of a 16 volume project, the Collected Works of Florence Nightingale. The best known of these essays, called Cassandra, was previously published by Ray Strachey in 1928. Strachey included it in The Cause, a history of the women's movement. Apparently, the writing served its original purpose of sorting out thoughts; Nightingale left soon after to train at the Institute for deaconesses at Kaiserswerth. Cassandra protests the over-feminisation of women into near helplessness, such as Nightingale saw in her mother's and older sister's lethargic lifestyle, despite their education. She rejected their life of thoughtless comfort for the world of social service. The work also reflects her fear of her ideas being ineffective, as were Cassandra's. Cassandra was a princess of Troy who served as a priestess in the temple of Apollo during the Trojan War. The god gave her the gift of prophecy; when she refused his advances, he cursed her so that her prophetic warnings would go unheeded. Elaine Showalter called Nightingale's writing "a major text of English feminism, a link between Wollstonecraft and Woolf.