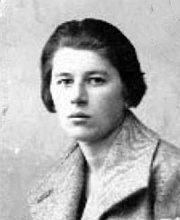 Ruth Moufang was a German mathematician. Born to a German chemist Dr. Eduard Moufang and Else Fecht Moufang, she studied mathematics at the University of Frankfurt. In 1931 she received her Ph.D. on projective geometry under the direction of Max Dehn, and in 1932 spent a fellowship year in Rome. After her year in Rome, she returned to Germany to lecture at the University of Königsberg and the University of Frankfurt. Her research in projective geometry built upon the work of David Hilbert. She was responsible for ground-breaking work on non-associative algebraic structures, including the Moufang loops named after her.

In 1933 Moufang showed Desargues's theorem does not hold in the Cayley plane. The Cayley plane uses octonion coordinates which do not satisfy the associative law. Such connections between geometry and algebra had been previously noted by Karl von Staudt and David Hilbert. Ruth Moufang thus initiated a new branch of geometry called Moufang planes.

Denied permission to teach by the minister of education of Nazi Germany, she worked in private industry until 1946, when she became the first woman professor at the University of Frankfurt.