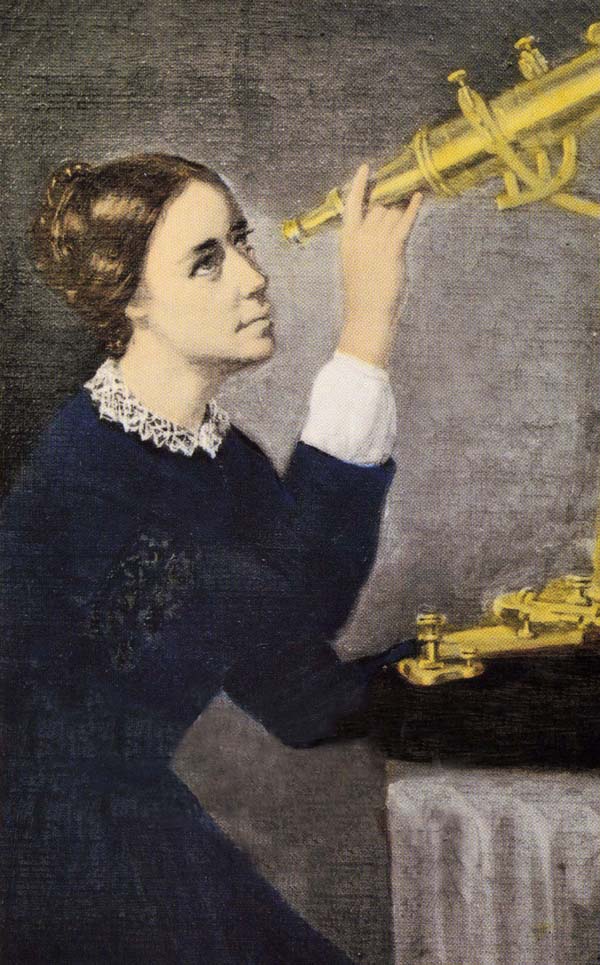 Maria Mitchell was an American astronomer who, in 1847, by using a telescope, discovered a comet which as a result became known as "Miss Mitchell's Comet". She won a gold medal prize for her discovery which was presented to her by King Frederick VII of Denmark - this was remarkable for a woman. On the medal was inscribed "Non Frustra Signorum Obitus Speculamur et Ortus" in Latin (taken from Georgics by Virgil (Book I, line 257) (English: “Not in vain do we watch the setting and rising of the stars”). Mitchell was the first American woman to work as a professional astronomer.

One of ten children, she was raised in the Quaker religion but later adopted Christian Unitarianism. Maria Mitchell was born in Nantucket, Massachusetts. She was a first cousin four times removed of Benjamin Franklin. She had nine brothers and sisters. Her parents, William Mitchell and Lydia Coleman Mitchell, were Quakers. Maria Mitchell was born into a community unusual for its time in regard to equality for women. Her parents, like other Quakers, valued education and insisted on giving her the same quality of education that boys received. One of the tenets of the Quaker religion was intellectual equality between the sexes. Additionally, Nantucket's importance as a whaling port meant that wives of sailors were left for months and sometimes years to manage affairs while their husbands were at sea, thus fostering an atmosphere of relative independence and equality for the women who called the island home. After attending Elizabeth Gardener's small school in her earliest childhood years, Maria attended the North Grammar school, where William Mitchell was the first principal. Two years following the founding of that school, when Maria was eleven, her father built his own school on Howard Street. There, she was a student and also a teaching assistant to her father. At home, Maria's father taught her astronomy using his personal telescope. At age twelve and a half, she aided her father in calculating the exact moment of an annular eclipse. Her father's school closed, and afterwards she attended Unitarian minister Cyrus Peirce's school for young ladies.

Later she worked for Peirce as his teaching assistant before she opened her own school in 1835. She made the decision to allow non-white children to attend her school, a controversial move as the local public school was still segregated at the time. One year later, she was offered a job as the first librarian of the Nantucket Atheneum, where she worked for 20 years. Using a telescope, she discovered "Miss Mitchell's Comet" (Comet 1847 VI, modern designation is C/1847 T1) on October 1, 1847, at 10:30 PM. Some years previously, King Frederick VI of Denmark had established gold medal prizes to each discoverer of a "telescopic comet" (too faint to be seen with the naked eye). The prize was to be awarded to the "first discoverer" of each such comet (note that comets are often independently discovered by more than one person).

Maria Mitchell won one of these prizes, and this gave her worldwide fame, since the only previous women to discover a comet have been Caroline Herschel who was a German-British astronomer and Maria Margarethe Winckelmann Kirch who was a German astronomer. There was a temporary question of priority because Francesco de Vico had independently discovered the same comet two days later, but had reported it to European authorities first; however, this was resolved in Mitchell's favor. The prize was awarded in 1848 by the new king Christopher VIII. She became the first woman elected Fellow of the American Academy of Arts and Sciences in 1848 and of the American Association for the Advancement of Science in 1850. Mitchell was also of the first women elected to the American Philosophical Society (1869, at the same meeting Mary Somerville and Elizabeth Cabot Agassiz were elected).

She later worked at the U.S. Nautical Almanac Office, calculating tables of positions of Venus, and traveled in Europe with Nathaniel Hawthorne and his family. She became professor of astronomy at Vassar College in 1865, the first person (male or female) appointed to the faculty. She was also named as Director of the Vassar College Observatory. After teaching there for some time, she learned that despite her reputation and experience, her salary was less than that of many younger male professors. She insisted on a salary increase, and got it. She taught at the college until her retirement in 1888, one year before her death. In 1842, she left the Quaker faith and followed Unitarian principles. In protest against slavery, she stopped wearing clothes made of cotton. She was friends with various suffragists such as Elizabeth Cady Stanton and co-founded the American Association for the Advancement of Women.