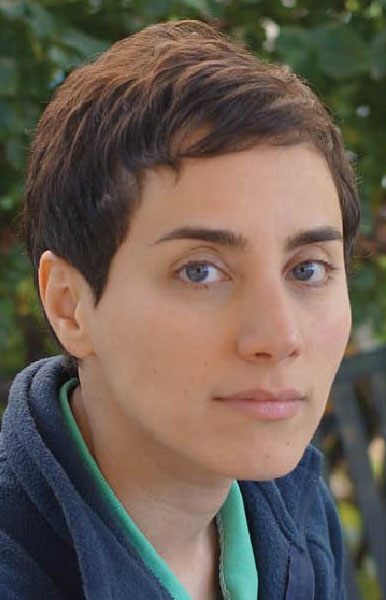 Main achievements: First woman and the first Iranian honored with the Fields Medal (2014).

Maryam Mirzakhani was an Iranian mathematician working in the United States. Since 1 September 2008, she has served as a professor of mathematics at Stanford University. In 2014, Mirzakhani became both the first woman and the first Iranian honored with the Fields Medal, the most prestigious award in mathematics. The award committee cited her work in understanding the symmetry of curved surfaces. Her research topics include Teichmüller theory, hyperbolic geometry, ergodic theory, and symplectic geometry.

In 1994, Mirzakhani won a gold medal in the International Mathematical Olympiad, the first female Iranian student to do so. In the 1995 Olympiad, she became the first Iranian student to achieve a perfect score and to win two gold medals. Mirzakhani was born in 1977 in Tehran, Iran. She went to high school in Tehran at Farzanegan, National Organization for Development of Exceptional Talents (NODET). She competed and was recognized internationally for her math skills, receiving gold medals at both the 1994 International Mathematical Olympiad (Hong Kong) and the 1995 International Mathematical Olympiad (Toronto), where she was the first Iranian student to finish with a perfect score. She obtained her BSc in mathematics (1999) from Sharif University of Technology in Tehran. She went to the United States for graduate work, earning a PhD from Harvard University (2004), where she worked under the supervision of the Fields Medalist Curtis McMullen. She was also a 2004 research fellow of the Clay Mathematics Institute and a professor at Princeton University.

Mirzakhani has made several contributions to the theory of moduli spaces of Riemann surfaces. In her early work, Mirzakhani discovered a formula expressing the volume of a moduli space with a given genus as a polynomial in the number of boundary components. This led her to obtain a new proof for the formula discovered by Edward Witten and Maxim Kontsevich on the intersection numbers of tautology classes on moduli space, as well as an asymptotic formula for the growth of the number of simple closed geodesics on a compact hyperbolic surface. Her subsequent work has focused on Teichmüller dynamics of moduli space. In particular, she was able to prove the long-standing conjecture that William Thurston's earthquake flow on Teichmüller space is ergodic.

Most recently as of 2014, with Alex Eskin and with input from Amir Mohammadi, Mirzakhani proved that complex geodesics and their closures in moduli space are surprisingly regular, rather than irregular or fractal. The closures of complex geodesics are algebraic objects defined in terms of polynomials and therefore they have certain rigidity properties, which is analogous to a celebrated result that Marina Ratner arrived at during the 1990s. The International Mathematical Union said in its press release that, "It is astounding to find that the rigidity in homogeneous spaces has an echo in the inhomogeneous world of moduli space." Mirzakhani was awarded the Fields Medal in 2014 for "her outstanding contributions to the dynamics and geometry of Riemann surfaces and their moduli spaces".

At the time of the award, Wisconsin professor Jordan Ellenberg explained her research to a popular audience: "... [Her] work expertly blends dynamics with geometry. Among other things, she studies billiards. But now, in a move very characteristic of modern mathematics, it gets kind of meta: She considers not just one billiard table, but the universe of all possible billiard tables. And the kind of dynamics she studies doesn't directly concern the motion of the billiards on the table, but instead a transformation of the billiard table itself, which is changing its shape in a rule-governed way; if you like, the table itself moves like a strange planet around the universe of all possible tables ... This isn't the kind of thing you do to win at pool, but it's the kind of thing you do to win a Fields Medal. And it's what you need to do in order to expose the dynamics at the heart of geometry; for there's no question that they're there."