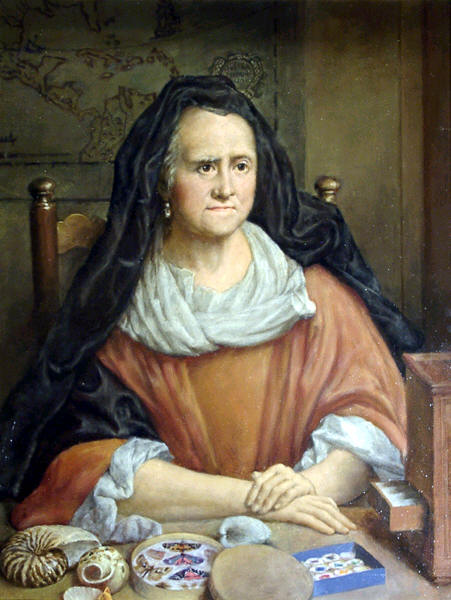 Maria Sibylla Merian was a German-born naturalist and scientific illustrator, a descendant of the Frankfurt branch of the Swiss Merian family, founders of one of Europe's largest publishing houses in the 17th century. Merian received her artistic training from her stepfather, Jacob Marrel, a student of the still life painter Georg Flegel. She remained in Frankfurt until 1670, relocating subsequently to Nuremberg, Wieuwerd (1685), where she stayed in a Labadist community till 1691, and Amsterdam.

Merian published her first book of natural illustrations, titled Neues Blumenbuch, in 1675 at age 28. In 1699, following eight years of painting and studying, and on the encouragement of Cornelis van Aerssen van Sommelsdijck, the then-governor of the Dutch colony of Surinam, Merian was awarded a grant by the city of Amsterdam to travel to South America with her daughter Dorothea. After two years there, she was forced return to Europe as result of malaria. She then proceeded to publish her major work, Metamorphosis insectorum Surinamensium, in 1705, for which she became famous.

Because of her careful observations and documentation of the metamorphosis of the butterfly, she is considered among the most significant contributors to the field of entomology. She was a leading entomologist of her time and she discovered many new facts about insect life through her studies. Maria Sibylla Merian was born on 2 April 1647 in Frankfurt, then a free imperial city of the Holy Roman Empire, into the family of the Swiss engraver and publisher Matthäus Merian the Elder. Her father died three years later, and in 1651 her mother married still life painter Jacob Marrel. Marrel encouraged Merian to draw and paint. While he lived mostly in Holland his pupil Abraham Mignon trained her.

At the age of thirteen she painted her first images of insects and plants from specimens she had captured. Regarding her youth, in the foreword to Metamorphosis insectorum Surinamensium, Merian wrote: "I spent my time investigating insects. At the beginning, I started with silk worms in my home town of Frankfurt. I realized that other caterpillars produced beautiful butterflies or moths, and that silkworms did the same. This led me to collect all the caterpillars I could find in order to see how they changed". In 1665 Merian married Marrel's apprentice, Johann Andreas Graff from Nuremberg; his father was a poet and director of the local high school, one of the leading schools in 17th century Germany. Two years later she had her first child, Johanna Helena, and the family moved to Nuremberg, her husband's home town. While living there, Maria Sibylla continued painting, working on parchment and linen, and creating designs for embroidery. She gave drawing lessons to unmarried daughters of wealthy families (her "Jungferncompaney", i.e. virgin group), which helped her family financially and increased its social standing. This provided her with access to the finest gardens, maintained by the wealthy and elite.

In 1681 she moved to Frankfurt am Main to live with her mother, after her stepfather died. In 1685 the family moved to Friesland where her halfbrother Caspar Merian lived in a religious community. Jean de Labadie set up a community in a stately home – Walta Castle – at Wieuwerd in Friesland, which belonged to three sisters Van Aerssen van Sommelsdijck, who were his adherents. Here printing and many other occupations continued, including farming and milling. At its peak, the community numbered around 600 with many more adherents further afield. Visitors came from England, Italy, Poland and elsewhere, but not all approved of the strict discipline. Those of arrogant disposition were given the most menial of jobs. Fussiness in matters or food was overcome since all were expected to eat what was put in front of them. Several noted visitors have left their accounts of visits to the Labadist community. One was Sophie of Hanover, mother of King George I of Great Britain; another was William Penn, the Quaker pioneer, who gave his name to the US state of Pennsylvania; a third was the English philosopher John Locke. In 1691 she moved with her daughters to Amsterdam and met with Caspar Commelin and Steven Blankaart. In 1692 she divorced from her husband.

In 1699 the city of Amsterdam sponsored Merian to travel to Suriname in South America, along with her younger daughter Dorothea Maria. Before departing, she wrote: "In Holland, with much astonishment what beautiful animals came from the East and West Indies. I was blessed with having been able to look at both the expensive collection of Doctor Nicolaas Witsen, mayor of Amsterdam and director of the East Indies society, and that of Mr. Jonas Witsen, secretary of Amsterdam. Moreover I also saw the collections of Mr. Fredericus Ruysch, doctor of medicine and professor of anatomy and botany, Mr. Livinus Vincent, and many other people. In these collections I had found innumerable other insects, but finally if here their origin and their reproduction is unknown, it begs the question as to how they transform, starting from caterpillars and chrysalises and so on. All this has, at the same time, led me to undertake a long dreamed of journey to Suriname." Merian worked in Suriname, which included what later became known as the French, Dutch and British Guianas, for two years, travelling around the colony and sketching local animals and plants. She criticized Dutch planters' treatment of natives and black slaves. She recorded local native names for the plants and described local uses. In 1701 malaria possible forced her to return to the Dutch Republic. Back in the Netherlands, Merian sold specimens she had collected and published a collection of engravings of plant and animal life in Suriname.

In 1705 she published a book Metamorphosis Insectorum Surinamensium about the insects of Suriname. In 1715, Merian suffered a stroke and was partially paralysed. She continued her work, but her illness probably affected her ability to work. A later registry lists her as a pauper. Maria Sibylla Merian died in Amsterdam on 13 January 1717 and was buried four days later. Her daughter Dorothea published "Erucarum Ortus Alimentum et Paradoxa Metamorphosis", a collection of her mother's work, posthumously. In the last quarter of the 20th century, the work of Merian was re-evaluated, validated, and reprinted. Her portrait was printed on the 500 DM note before Germany converted to the euro. Her portrait has also appeared on a 0.40 DM stamp, released on 17 September 1987, and many schools are named after her.

In 2005, a modern research vessel named Maria S. Merian was launched at Warnemünde, Germany. She was honored with a Google Doodle on 2 April 2013 to mark her 366th birth anniversary. Merian worked as a botanical artist. She published collections of engravings of plants in 1675, 1677, and 1680. She collected and observed live insects and created detailed drawings to illustrate insect metamorphosis. In her time, it was very unusual that someone would be genuinely interested in insects, which had a bad reputation and were colloquially called "beasts of the devil." As a consequence of their reputation, the metamorphosis of these animals was largely unknown. Merian described the life cycles of 186 insect species, amassing evidence that contradicted the contemporary notion that insects were "born of mud" by spontaneous generation. Moreover, although certain scholars were aware of the process of metamorphosis from the caterpillar to the butterfly, the majority of people did not understand the process.

The work that Anna Maria Sibylla Merian published, Der Raupen wunderbare Verwandlung und sonderbare Blumennahrung – The Caterpillars' Marvelous Transformation and Strange Floral Food, was very popular in certain segments of high society as a result of being published in the vernacular. However, her work was largely ignored by scientists of the time because the official language of science was still Latin. Merian also described many other details of the evolution and lifecycle of the insects she observed. For example, she showed that each stage of the change from caterpillar to butterfly depended on a small number of plants for its nourishment. She noted that as a consequence the eggs were laid near these plants. Merian was one of the first naturalists to observe insects directly. This approach gave her much more insight into their lives and was contrary to the way that most scientists worked at the time.