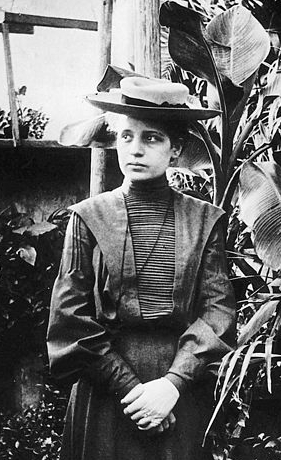 Lise Meitner was an Austrian physicist who worked on radioactivity and nuclear physics. Meitner was part of the team that discovered nuclear fission, an achievement for which her colleague Otto Hahn was awarded the Nobel Prize. Meitner is often mentioned as one of the most glaring examples of women's scientific achievement overlooked by the Nobel committee. A 1997 Physics Today study concluded that Meitner's omission was "a rare instance in which personal negative opinions apparently led to the exclusion of a deserving scientist" from the Nobel. Element 109, meitnerium, is named in her honour.

Meitner was born into a Jewish family as the third of eight children in Vienna, 2nd district (Leopoldstadt). Her father, Philipp Meitner, was one of the first Jewish lawyers in Austria. Meitner studied physics and became the second woman to obtain a doctoral degree in physics at the University of Vienna in 1905 ("Wärmeleitung im inhomogenen Körper"). Women were not allowed to attend public institutions of higher education in those days, but Meitner was able to achieve a private education in physics in part because of her supportive parents, and she completed in 1901 with an "externe Matura" examination at the Akademisches Gymnasium.

In 1926, Meitner became the first woman in Germany to assume a post of full professor in physics, at the University of Berlin. There she undertook the research program in nuclear physics which eventually led to her co-discovery of nuclear fission in 1939, after she had left Berlin. She was praised by Albert Einstein as the "German Marie Curie". In 1930, Meitner taught a seminar on nuclear physics and chemistry with Leó Szilárd. With the discovery of the neutron in the early 1930s, speculation arose in the scientific community that it might be possible to create elements heavier than uranium (atomic number 92) in the laboratory. A scientific race began between Ernest Rutherford in Britain, Irène Joliot-Curie in France, Enrico Fermi in Italy, and the Meitner–Hahn team in Berlin. At the time, all concerned believed that this was abstract research for the probable honour of a Nobel prize. None suspected that this research would culminate in nuclear weapons.

Following the doctoral degree, she rejected an offer to work in a gas lamp factory. Encouraged by her father and backed by his financial support, she went to Berlin. Max Planck allowed her to attend his lectures, an unusual gesture by Planck, who until then had rejected any women wanting to attend his lectures. After one year, Meitner became Planck's assistant. During the first years she worked together with chemist Otto Hahn and discovered with him several new isotopes. In 1909 she presented two papers on beta-radiation. In 1912 the research group Hahn–Meitner moved to the newly founded Kaiser-Wilhelm-Institut (KWI) in Berlin-Dahlem, south west in Berlin. She worked without salary as a "guest" in Hahn's department of Radiochemistry. It was not until 1913, at 35 years old and following an offer to go to Prague as associate professor, that she got a permanent position at KWI. In the first part of World War I, she served as a nurse handling X-ray equipment. She returned to Berlin and her research in 1916, but not without inner struggle. She felt in a way ashamed of wanting to continue her research efforts when thinking about the pain and suffering of the victims of war and their medical and emotional needs. In 1917, she and Hahn discovered the first long-lived isotope of the element protactinium, for which she was awarded the Leibniz Medal by the Berlin Academy of Sciences. That year, Meitner was given her own physics section at the Kaiser Wilhelm Institute for Chemistry. In 1922, she discovered the cause, known as the Auger effect, of the emission from surfaces of electrons with 'signature' energies. The effect is named for Pierre Victor Auger, a French scientist who independently discovered the effect in 1923.

When Adolf Hitler came to power in 1933, Meitner was acting director of the Institute for Chemistry. Although she was protected by her Austrian citizenship, all other Jewish scientists, including her nephew Otto Frisch, Fritz Haber, Leó Szilárd and many other eminent figures, were dismissed or forced to resign from their posts. Most of them emigrated from Germany. Her response was to say nothing and bury herself in her work. In 1938, Meitner fled to Holland and finally arrived in Sweden. She later acknowledged, in 1946, that "It was not only stupid but also very wrong that I did not leave at once."

After the Anschluss, her situation became desperate. On July 13, 1938, Meitner, with the support of Otto Hahn and the help from the Dutch physicists Dirk Coster and Adriaan Fokker, escaped to the Netherlands. She was forced to travel under cover to the Dutch border, where Coster persuaded German immigration officers that she had permission to travel to the Netherlands. She reached safety, though without her possessions. Meitner later said that she left Germany forever with 10 marks in her purse. Before she left, Otto Hahn had given her a diamond ring he had inherited from his mother: this was to be used to bribe the frontier guards if required. It was not required, and Meitner's nephew's wife later wore it. Meitner was lucky to escape, as Kurt Hess, a chemist who was the head of the organic department of the KWI and an avid Nazi, had informed the authorities that she was about to flee. An appointment at the University of Groningen did not come through, and she went instead to Stockholm, where she took up a post at Manne Siegbahn's laboratory, despite the difficulty caused by Siegbahn's prejudice against women in science. Here she established a working relationship with Niels Bohr, who travelled regularly between Copenhagen and Stockholm. She continued to correspond with Hahn and other German scientists. On occasion of a lecture by Hahn in Bohr's Institute he, Meitner and Frisch met in Copenhagen on November 10. Later they exchanged a series of letters. In December Hahn and Fritz Strassmann performed the difficult experiments which isolated the evidence for nuclear fission at their laboratory in Berlin. The surviving correspondence shows that Hahn recognized that fission was the only explanation for the barium (at first he named the process a 'bursting' of the uranium), but, baffled by this remarkable conclusion, he wrote to Meitner. The possibility that uranium nuclei might break up under neutron bombardment had been suggested years before, notably by Ida Tacke Noddack in 1934. However, by employing the existing "liquid-drop" model of the nucleus, Meitner and Frisch were the first to articulate a theory of how the nucleus of an atom could be split into smaller parts: uranium nuclei had split to form barium and krypton, accompanied by the ejection of several neutrons and a large amount of energy (the latter two products accounting for the loss in mass). She and Frisch had discovered the reason that no stable elements beyond uranium (in atomic number) existed naturally; the electrical repulsion of so many protons overcame the strong nuclear force. Frisch and Meitner also first realized that Einstein's famous equation, E = mc2, explained the source of the tremendous releases of energy in nuclear fission, by the conversion of rest mass into kinetic energy, popularly described as the conversion of mass into energy. Hahn and Strassmann had sent the manuscript of their first paper to Naturwissenschaften in December 1938, reporting they had detected and identified the element barium after bombarding uranium with neutrons; simultaneously, Hahn had communicated their results exclusively to Meitner in several letters, and did not inform the physicists in his own institute.

In their second publication on the evidence of barium (Die Naturwissenschaften, 10 February 1939) Hahn and Strassmann used for the first time the name Uranspaltung (Uranium fission) and predicted the existence and liberation of additional neutrons during the fission process (which was proved later to be a chain reaction by Frédéric Joliot and his team). Lise Meitner and her nephew Otto Frisch were the first who correctly interpreted Hahn's and Strassmann's results as being nuclear fission, a term coined by Frisch, and published their paper in Nature. Frisch confirmed this experimentally on 13 January 1939. These two reports, the first Hahn-Strassmann publication of January 6, 1939, and the Frisch-Meitner publication of February 11, 1939, had electrifying effects on the scientific community. Because there was a possibility that fission could be used as a weapon, and since the knowledge was in German hands, Leó Szilárd, Edward Teller, and Eugene Wigner jumped into action, persuading Albert Einstein, a celebrity, to write President Franklin D. Roosevelt a letter of caution. In 1940 Frisch and Rudolf Peierls produced the Frisch–Peierls memorandum, which first set out how an atomic explosion could be generated, and this ultimately led to the establishment in 1942 of the Manhattan Project. Meitner refused an offer to work on the project at Los Alamos, declaring "I will have nothing to do with a bomb!" Meitner said that Hiroshima had come as a surprise to her, and that she was "sorry that the bomb had to be invented." In Sweden, Meitner was first active at Siegbahn's Nobel Institute for Physics, and at the Swedish Defence Research Establishment (FOA) and the Royal Institute of Technology in Stockholm, where she had a laboratory and participated in research on R1, Sweden's first nuclear reactor. In 1947, a personal position was created for Meitner at the University College of Stockholm with the salary of a professor and funding from the Council for Atomic Research.