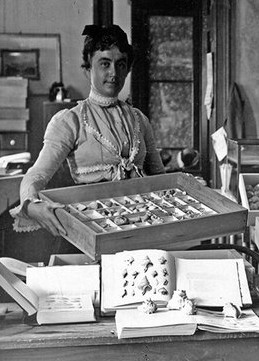 Main achievements: First women to work as a professional scientist in the oil and gas industry.

Carlotta Joaquina Maury was a geologist, stratigrapher, paleontologist, and was one of the first women to work as a professional scientist in the oil and gas industry. The international fuel corporation offered her a job in 1910. Prejudice against professional women at the time did not affect Maury due to her extensive knowledge, recognized technical skills, and capabilities.

Carlotta Joaquina Maury was born on January 6, 1874 in Hastings-on-Hudson, New York. Maury's father was the Reverend Mytton Maury, a direct descendant of the Reverend James Maury and one of the sons of Sarah Mytton Maury. Maury's mother was Virginia Draper, a daughter of Antonia Coetana de Paiva Pereira Gardner and Dr. John William Draper. Her Grandfather, Daniel Gardner was the Emperor of Brazil's physician. Her sister, Antonia Maury became an astronomer and worked as a scientist and a mathematician in Harvard Observatory. Maury had another sister, Sarah Mytton Maury who died in infancy. Her brother, John William Draper was a well known New York surgeon who died in 1931. Maury was also the granddaughter of John William Draper and a niece of Henry Draper, both pioneering astronomers who privately funded the Harvard Observatory.

Maury was educated at Radcliffe College from 1891 to 1894, she later attended Jardin des Plantes in Paris from 1899 to 1900 and Columbia University. After spending a year at Sorbonne for post-graduate studies, she completed her PhD at Cornell University in 1902, making her one of the first women to receive her PhD in paleontology.

Upon completion of her degree, Maury started teaching at Erasmus High School in Brooklyn, New York in 1900. She went on to become a paleontologist assistant at Columbia University in 1904 and a lecturer in geology at Columbia College and Barnard College until 1912.

C.J. Maury returned to the field and joined a team led by G.D. Harris, her former Cornell advisor. The team’s objective was to investigate oil-rich areas off the coasts of Texas and Louisiana in the Gulf of Mexico. The information provided was the first significant geological information about the oil-producing area it is today. Maury’s specific contribution to the team’s research efforts was assembling data based on paleontologist findings in order to create a structure map of a large region. The team’s analysis has only needed minor adjustments since being published in 1910.

In 1910, she started working for the Royal Dutch Shell as a consulting geologist and stratigrapher - she became the first female to be hired as a consultant, and then for General Asphalt Co. as part of a team to explore areas of Old Eocene beds in Trinidad and Venezuela. Her findings of fossils and fauna were the first of their kind in the Caribbean and South America. After teaching at Huguenot College in Wellington, South Africa, she returned to the Caribbean in 1916 as a leader of the "Maury Expedition" to the Dominican Republic, despite political instability in the area at the time. Her goal was to order the stratigraphic layers of the Miocene and Oligocene eras, which were composed of sedimentary rock with heavy fossil deposits. This resulted in the discovery of 400 new species. Her work formed the foundation of the present day International Dominican Republic Project, which is a research effort that aims to dissect evolutionary change in the Caribbean from the Miocene era to the present day. In 1925, Maury published "Fosseis Terciarios do Brazil with Descripcao de Nova Cretaceas Forms". In this work she describes a various amount of species of mollusks from the northeaster coast of South America. Using her stratigraphy knowledge, she was able to find a correlation of those faunas with similar faunas around the Caribbean and the Gulf of Mexico.

C.J. Maury was known for working speedily, while paying attention to detail and upholding a high level of enthusiasm. Her skills and capabilities were highly acknowledged that she became an official paleontologist with the Geological and Mineralogical Service of Brazil. While in this position, she published multiple monographs and Mineralogical Service Bulletins between 1919-1937.

Most of her work after 1923 was completed inside a private lab in her apartment in Yonkers, New York. Since she was financially independent she was able to hire other specialists on the work she wasn’t as confident in.