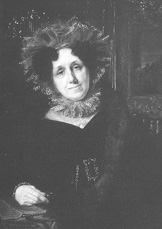 Jane Marcet was born Jane Haldimand in London on 1 January 1769, one of twelve children of wealthy merchant and banker Anthony Francis Haldimand (1740/41–1817) and his wife Jane (died 1785). Following Swiss tradition, she was educated at home with her brothers: her studies included Latin (essential for the sciences), chemistry, biology, and history, as well as topics more usual for young ladies in England. Jane took over the running of the family at age 15, after her mother's death. She managed the house and helped to bring up her younger siblings. Her younger brother William Haldimand (1784–1862) became a director of the Bank of England and a member of Parliament. She also acted as her father's hostess, helping to entertain frequent parties of scientific and literary guests. Jane developed an early interest in painting during a visit to Italy with her father in 1796, and studied with Joshua Reynolds and Thomas Lawrence. Her artistic training later enabled her to illustrate her books.

Jane was married in 1799 to Alexander John Gaspard Marcet (1770–1822), a political exile from Geneva, Switzerland who graduated from medical school at the University of Edinburgh as a physician in 1797. After their marriage, the Marcets continued to live in London. They had four children, one of whom, François Marcet (1803–1883), became a well-known physicist.

Alexander was strongly interested in chemistry, and became a lecturer at Guy's Hospital in London and a Fellow of the Royal Society. When Jane became interested in learning more about chemistry, they conducted experiments together in a home laboratory, discussing the scientific principles involved.

The Marcets were part of a literary and scientific social circle that included many leading writers and scientists such as Mary Somerville, Henry Hallam, Harriet Martineau, Auguste Arthur de la Rive and Maria Edgeworth. Novelist Maria Edgeworth described their home, with its lively, intelligent children and welcome for visitors, in her letters.

Jane and her father were close throughout their lives, and he lived with his daughter and her husband after their marriage. After Jane’s father died in 1817, she received a substantial legacy which enabled Alexander Marcet to devote himself full-time to chemistry, giving up his medical practice. Alexander, in his turn, understood and supported his wife's need for intellectual engagement and productive work.

After helping to read the proofs of one of her husband's books, Marcet decided to write her own, and produced expository books on chemistry, botany, religion and economics under the general title "Conversations". In her prefaces, Marcet explicitly addresses issues of whether such knowledge is suitable for women, arguing against objections and stating that public opinion supports her position.

The first of these was written in 1805, although not published until much later in 1819, as Conversations on Natural Philosophy. The textbook covered the basics of scientific knowledge of the time: physics, mechanics, astronomy, the properties of fluids, air, and optics. Marcet's next book, Conversations on Chemistry, Intended More Especially for the Female Sex was published anonymously in 1805, and became her most popular and famous work. Summarizing and popularising the work of Humphry Davy, whose lectures she attended, it was one of the first elementary science textbooks. It was illustrated with Marcet's own drawings of chemical apparatus and emphasised the importance both of demonstration by experiment and of theoretical rigour. Jane Marcet was not explicitly identified as the author until the twelfth edition appeared in 1832. The book went into 16 editions in England, where it was an early inspiration for the young Michael Faraday. It was widely plagiarised in America, appearing in at least 23 editions there.

In 1820 the Marcets travelled to Geneva, Switzerland, intending to relocate there. In 1822, Alexander died unexpectedly while on a visit to Britain. Jane was extremely distressed by his death. She went through one of several periods of depression to affect her during her life, described by her friend Auguste de La Rive as a "shadow enveloping an energetic and active spirit". Though she retained strong ties to her Swiss friends, she eventually returned to England to live.

She continued to be active in scientific circles, and updated and published new editions of her major works throughout her life. Her last edition of "Conversations on Chemistry" appeared when she was eighty-four. In later life, Marcet wrote new works mainly for children, perhaps with her grandchildren in mind. Mary's Grammar (1835) became a classic.