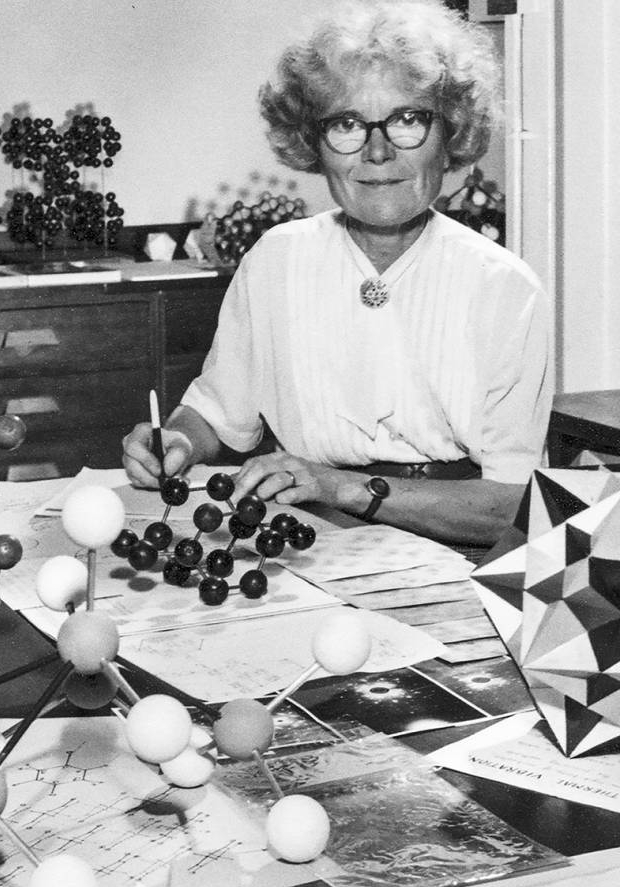 Main achievements: She proved, in 1929, that the benzene ring is flat by using X-ray diffraction methods.

Dame Kathleen Lonsdale was an Irish pacifist, prison reformer and crystallographer. She proved, in 1929, that the benzene ring is flat by using X-ray diffraction methods to elucidate the structure of hexamethylbenzene. She was the first to use Fourier spectral methods while solving the structure of hexachlorobenzene in 1931. During her career she attained several firsts for female scientists, including being one of the first two women elected a Fellow of the Royal Society (FRS) in 1945 (along with Marjory Stephenson), first woman tenured professor at University College London, first woman president of the International Union of Crystallography, and first woman president of the British Association for the Advancement of Science.

She was born Kathleen Yardley at Newbridge, County Kildare, Ireland, the tenth child of Harry Yardley, the town postmaster, and Jessie Cameron. Her family moved to Seven Kings, Essex, England, when she was five years old. She studied at Woodford County High School for Girls, then transferred to Ilford County High School for Boys to study mathematics and science, because the girls' school did not offer these subjects. She earned her Bachelor of Science degree from Bedford College for Women in 1922, graduating in physics with an MSc from University College London in 1924.

In 1924 she joined the crystallography research team headed by William Henry Bragg at the Royal Institution. From 1929 to 1934, she started a family and largely stayed at home while continuing her work calculating structure factors.

In 1934, Lonsdale returned to work with Bragg at the Royal Institution as a researcher. She was awarded a DSc from University College London in 1936 while at the Royal Institution. In addition to discovering the structure of benzene and hexachlorobenzene, Lonsdale worked on the synthesis of diamonds. She was a pioneer in the use of X-rays to study crystals. Lonsdale was one of the first two women elected a Fellow of the Royal Society (FRS) in 1945 (the other was the biochemist Marjory Stephenson).

In 1949 Lonsdale was appointed professor of chemistry and head of the Department of Crystallography at University College London. She was the first tenured woman professor at that college, a position she held until 1968 when she was named Professor Emeritus.

Legacy and honours
She was elected an Honorary Member of the Women's Engineering Society in 1946 in recognition of her “brilliant and important work".
1956, she was made Dame Commander of the Order of the British Empire.
1966, she was elected as the first woman president of the International Union of Crystallography.
1967, active in encouraging young people to study science, she was elected as the first woman president of the British Association for the Advancement of Science.
There are buildings named in her honour at University College London, at the University of Limerick, and at Dublin City University.
1969, she was awarded an Honorary Degree (Doctor of Science) by the University of Bath.
Lonsdaleite, an allotrope of carbon, was named in her honour; it is a rare harder form of diamond found in meteorites.