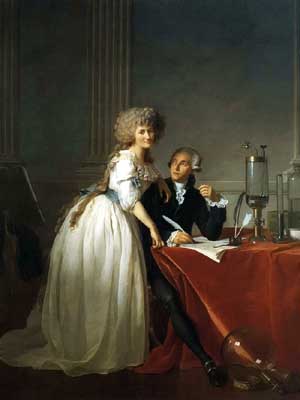 Main achievements: The Lavoisiers rebuilt the field of chemistry.

Marie-Anne Pierrette Paulze Lavoisier was a French chemist and noble. She was the wife of Antoine Lavoisier and acted as his laboratory companion and contributed to his work.

Her father, Jacques Paulze, worked primarily as a parliamentary lawyer and financier. Most of his income came from running the Ferme Générale (the General Farm) which was a private consortium of financiers who paid the French monarchy for the privilege of collecting certain taxes. Her mother, Claudine Thoynet Paulze, died in 1761, leaving behind not only Marie-Anne, then aged 3 only, but two other sons. After her mother’s death Paulze was placed in a convent where she received her formal education.

At the age of thirteen Paulze received a marriage proposal from the 50-year-old Count d'Amerval. Jacques Paulze tried to object to the union, but received threats about losing his job with the Ferme Générale. To indirectly thwart the marriage, Jacques Paulze made an offer to one of his colleagues to ask for his daughter’s hand instead. This colleague was Antoine Lavoisier, a French nobleman and scientist. Lavoisier accepted the proposition, and he and Marie-Anne were married on 16 December 1771. Lavoisier was about 28, while Marie-Anne was about 13.

Lavoisier continued to work for the Ferme-Générale but in 1775 was appointed gunpowder administrator, leading the couple to settle down at the Arsenal in Paris. Here, Lavoisier’s interest in chemistry blossomed having previously trained at the chemical laboratory of Guillaume François Rouelle, and, with the financial security provided by both his and Paulze’s family, as well as his various titles and other business ventures, he was able to construct a state-of-the-art chemistry laboratory. Paulze soon became interested in his scientific research and began to actively participate in her husband's laboratory work.

As her interest developed, she received formal training in the field from Jean Baptiste Michel Bucquet and Philippe Gingembre, both of whom were Lavoisier’s colleagues at the time. The Lavoisiers spent most of their time together in the laboratory, working as a team conducting research on many fronts. She also assisted him by translating documents about chemistry from English to French. In fact, the majority of the research effort put forth in the laboratory was actually a joint effort between Paulze and her husband, with Paulze mainly playing the role of laboratory assistant.

Paulze accompanied Lavoisier in his lab during the day, making entries into his lab notebooks and sketching diagrams of his experimental designs. The training she had received from the painter Jacques-Louis David allowed her to accurately and precisely draw experimental apparatuses, which ultimately helped many of Lavoisier’s contemporaries to understand his methods and results. Furthermore, she served as the editor of his reports. Together, the Lavoisiers rebuilt the field of chemistry, which had its roots in alchemy and at the time was a convoluted science dominated by George Stahl’s theory of phlogiston.

In the eighteenth century the idea of phlogiston (a fire-like element which is gained or released during a material’s combustion) was used to describe the apparent property changes that substances exhibited when burned. Paulze, being a master in the English, Latin and French language, was able to translate various works about phlogiston into French for her husband to read. Perhaps her most important translation was that of Richard Kirwan's 'Essay on Phlogiston and the Constitution of Acids', which she both translated and critiqued, adding footnotes as she went along and pointing out errors in the chemistry made throughout the paper. She also translated works by Joseph Priestley, Henry Cavendish, and others for Lavoisier’s personal use. This was an invaluable service to Lavoisier, who relied on Paulze’s translation of foreign works to keep abreast of current developments in chemistry. In the case of phlogiston, it was Paulze’s translation that convinced him the idea was incorrect, ultimately leading to his studies of combustion and his discovery of oxygen gas.

Paulze was also instrumental in the 1789 publication of Lavoisier’s Elementary Treatise on Chemistry, which presented a unified view of chemistry as a field. This work proved pivotal in the progression of chemistry, as it presented the idea of conservation of mass as well as a list of elements and a new system for chemical nomenclature. Paulze contributed thirteen drawings that showed all the laboratory instrumentation and equipment used by the Lavoisiers in their experiments. She also kept strict records of the procedures followed, lending validity to the findings Lavoisier published.

Before her death, Paulze was able to recover nearly all of Lavoisier’s notebooks and chemical apparatuses, most of which survive in a collection at Cornell University, the largest of its kind outside of Europe. The year she died, a book was published, showing that Marie-Anne had a rich theological library with books which included versions of The Bible, St. Augustine's Confessions, Jacques Saurin's Discours sur la Bible, Pierre Nicole's Essais de Morale, Blaise Pascal's Lettres provinciales, Louis Bourdaloue's Sermons, Thomas à Kempis's De Imitatione Christi, etc.