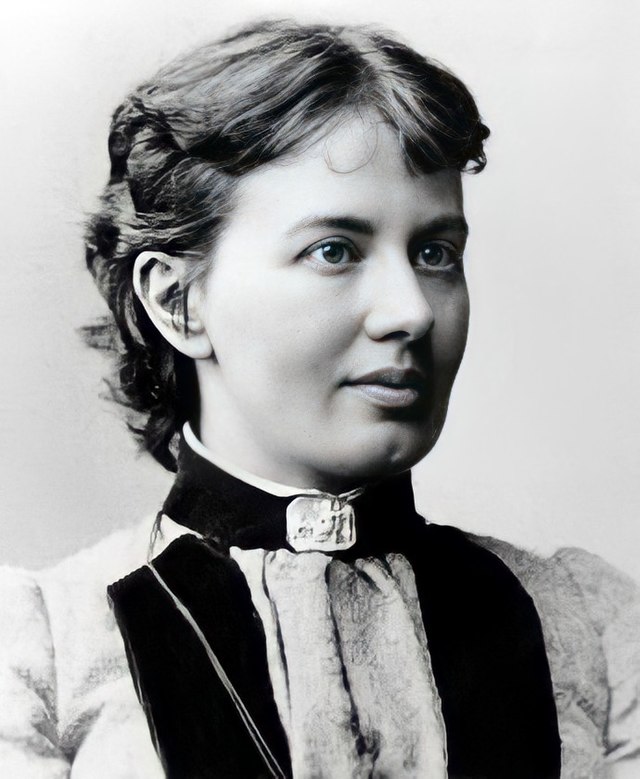 Sofia Vasilyevna Kovalevskaya was the first major Russian female mathematician, responsible for important original contributions to analysis, differential equations and mechanics, and the first woman appointed to a full professorship in Northern Europe. She was also one of the first women to work for a scientific journal as an editor. There are several alternative transliterations of her name. She herself used Sophie Kowalevski (or occasionally Kowalevsky), for her academic publications. After moving to Sweden, she called herself Sonya.

Sofia Kovalevskaya (née Korvin-Krukovskaya), was born in Moscow, the second of three children. Her father, Vasily Vasilyevich Korvin-Krukovsky, was a man of Polish descent and was Lieutenant-General of Artillery who served in the Imperial Russian Army. Her mother, Yelizaveta Fedorovna Schubert, was a scholarly woman of German ancestry and Sofia's grandmother was Romani. When she was 11 years old, the wall paper in her room had differential and integral analysis, which was her early preparation for calculus. They nurtured her interest in mathematics and hired a tutor (A. N. Strannoliubskii, a well-known advocate of higher education for women), who taught her calculus. During that same period, the son of the local priest introduced her to nihilism. Despite her obvious talent for mathematics, she could not complete her education in Russia. At that time, women there were not allowed to attend universities. In order to study abroad, she needed written permission from her father (or husband). Accordingly, she contracted a "fictitious marriage" with Vladimir Kovalevskij, then a young paleontology student who would later become famous for his collaboration with Charles Darwin.

They emigrated from Russia in 1867. In 1869, Kovalevskaya began attending the University of Heidelberg, Germany, which allowed her to audit classes as long as the professors involved gave their approval. Shortly after beginning her studies there, she visited London with Vladimir, who spent time with his colleagues Thomas Huxley and Charles Darwin, while she was invited to attend George Eliot's Sunday salons. There, at age nineteen, she met Herbert Spencer and was led into a debate, at Eliot's instigation, on "woman's capacity for abstract thought". This was well before she made her notable contribution of the "Kovalevsky top" to the brief list of known examples of integrable rigid body motion (see following section). George Eliot was writing Middlemarch at the time, in which one finds the remarkable sentence: "In short, woman was a problem which, since Mr. Brooke's mind felt blank before it, could hardly be less complicated than the revolutions of an irregular solid." Kovalevskaya participated in social movements and shared ideas of utopian socialism.

In 1871 she traveled to Paris together with her husband in order to attend to the injured from the Paris Commune. Kovalevskaya helped save Victor Jaclard, who was the husband of her sister Ann (Anne Jaclard). After two years of mathematical studies at Heidelberg under such teachers as Hermann von Helmholtz, Gustav Kirchhoff and Robert Bunsen, she moved to Berlin, where she had to take private lessons from Karl Weierstrass, as the university would not even allow her to audit classes. In 1874 she presented three papers—on partial differential equations, on the dynamics of Saturn's rings and on elliptic integrals —to the University of Göttingen as her doctoral dissertation. With the support of Weierstrass, this earned her a doctorate in mathematics summa cum laude, bypassing the usual required lectures and examinations. She thereby became the first woman in Europe to hold that degree. Her paper on partial differential equations contains what is now commonly known as the Cauchy-Kovalevski theorem, which gives conditions for the existence of solutions to a certain class of those equations.

In the early 1880s, Sofia and her husband Vladimir developed financial problems. Sofia wanted to be a lecturer at the university; however, she was not allowed to because she was a woman, despite volunteering to provide free lectures. Soon after, Vladimir started a house building business with Sofia as his assistant. In 1879, the price for mortgages became higher and they became bankrupt. Shortly after, Vladimir got a job offer and Sofia helped neighbors to electrify street lights. Vladimir and Sofia quickly established themselves again financially. The Kovalevskys returned to Russia, but failed to secure professorships because of their radical political beliefs. Discouraged, they went back to Germany. Vladimir, who had always suffered severe mood swings, became more unstable so they spent most of their time apart.

Then, for some unknown reason, they decided to spend several years together as an actual married couple. During this time their daughter, Sofia (called "Fufa"), was born. After a year devoted to raising her daughter, Kovalevskaya put Fufa under the care of her older sister, resumed her work in mathematics and left Vladimir for what would be the last time. In 1883, faced with worsening mood swings and the possibility of being prosecuted for his role in a stock swindle, Vladimir committed suicide. That year, with the help of the mathematician Gösta Mittag-Leffler, whom she had known as a fellow student of Weierstrass', Kovalevskaya was able to secure a position as a privat-docent at Stockholm University in Sweden. Kovalevskaya met Mittag-Leffler through his sister, actress, novelist, and playwright Anne-Charlotte Edgren-Leffler. Until Kovalevsky's death the two women shared a close friendship. The following year (1884) she was appointed to a five year position as "Professor Extraordinarius" (Professor without Chair) and became the editor of Acta Mathematica.

In 1888 she won the Prix Bordin of the French Academy of Science, for her work on the question: "Mémoire sur un cas particulier du problème de le rotation d'un corps pesant autour d'un point fixe, où l'intégration s'effectue à l'aide des fonctions ultraelliptiques du temps". Her submission included the celebrated discovery of what is now known as the "Kovalevsky top", which was subsequently shown (by Liouville) to be the only other case of rigid body motion, beside the tops of Euler and Lagrange, that is "completely integrable". In 1889 she was appointed Professor Ordinarius (Professorial Chair holder) at Stockholm University, the first woman to hold such a position at a northern European university. After much lobbying on her behalf (and a change in the Academy's rules) she was granted a Chair in the Russian Academy of Sciences, but was never offered a professorship in Russia. Kovalevskaya wrote several non-mathematical works as well, including a memoir, A Russian Childhood, plays (in collaboration with Duchess Anne Charlotte Edgren-Leffler) and a partly autobiographical novel, Nihilist Girl (1890). She died of influenza in 1891 at age forty-one, after returning from a pleasure trip to Genoa. She is buried in Solna, Sweden, at Norra begravningsplatsen.