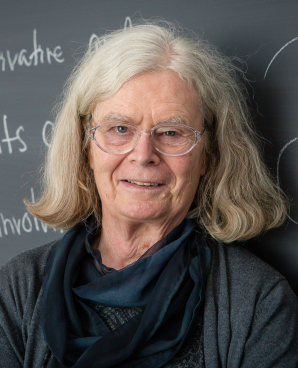 Main achievements: Pioneering achievements in geometric partial differential equations, gauge theory and integrable systems, and for the fundamental impact of her work on analysis, geometry and mathematical physics. First woman to win the Abel Prize (2019).

Karen Keskulla Uhlenbeck is a professor and Sid W. Richardson Foundation Regents Chairholder in the Department of Mathematics at the University of Texas in Austin.

In 2019, Uhlenbeck became the first woman to win the Abel Prize, with the award committee citing “the fundamental impact of her work on analysis, geometry and mathematical physics".

Uhlenbeck received her B.A. (1964) from the University of Michigan. She began her graduate studies at the Courant Institute of Mathematical Sciences at New York University, and married biophysicist Olke C. Uhlenbeck in 1965. When her husband went to Harvard, she moved with him and restarted her studies at Brandeis University, where she earned a M.A. (1966) and Ph.D. (1968) from Brandeis under the supervision of Richard Palais. Her doctoral dissertation was titled The Calculus of Variations and Global Analysis.

After temporary jobs at the Massachusetts Institute of Technology and University of California, Berkeley, and having difficulty finding a permanent position with her husband because of the "anti-nepotism" rules then in place that prevented hiring both a husband and wife even in distinct departments of a university, she took a faculty position at the University of Illinois at Urbana–Champaign in 1971. However, she disliked Urbana and ended up divorcing her husband and moving to the University of Illinois at Chicago in 1976. She moved again to the University of Chicago in 1983, and to the University of Texas at Austin as the Sid W. Richardson Foundation Regents Chairholder in 1988, where she supervised a number of PhD students, including Mark Haskins. In 2019, Uhlenbeck became the first woman to win the Abel Prize, with the award committee citing “the fundamental impact of her work on analysis, geometry and mathematical physics".

She participates or has participated in research in the fields of geometric partial differential equations, the calculus of variations, gauge theory, topological quantum field theory, and integrable systems. Uhlenbeck developed tools and methods in global analysis, which are now in the toolbox of every geometer and analyst. Her work also lays the foundation for contemporary geometric models in mathematics and physics. Inspired by a fellow Abel Prize laureate, the late Sir Michael Atiyah, Uhlenbeck became interested in gauge theory. Gauge theory is the mathematical language of theoretical physics, and Uhlenbeck’s fundamental work in this area is essential for the modern mathematical understanding of models in particle physics, string theory and general relativity.

Uhlenbeck is a mathematician, but she is also a role model and a strong advocate for gender equality in science and mathematics. As a child, she loved reading and dreamed of becoming a scientist. Today, Uhlenbeck is Visiting Senior Research Scholar at Princeton University as well as Visiting Associate at the Institute for Advanced Study (IAS). She is one of the founders of the Park City Mathematics Institute (PCMI) at IAS, which aims to train young researchers and promote mutual understanding of the interests and challenges in mathematics.

She is also the co-founder of the Institute’s Women and Mathematics program (WAM), created in 1993 to recruit and empower women to lead in mathematics research at all stages of their academic careers.

“Karen Uhlenbeck receives the Abel Prize 2019 for her fundamental work in geometric analysis and gauge theory, which has dramatically changed the mathematical landscape. Her theories have revolutionized our understanding of minimal surfaces, such as those formed by soap bubbles, and more general minimization problems in higher dimensions.” – Hans Munthe-Kaas, Chair of the Abel Committee.