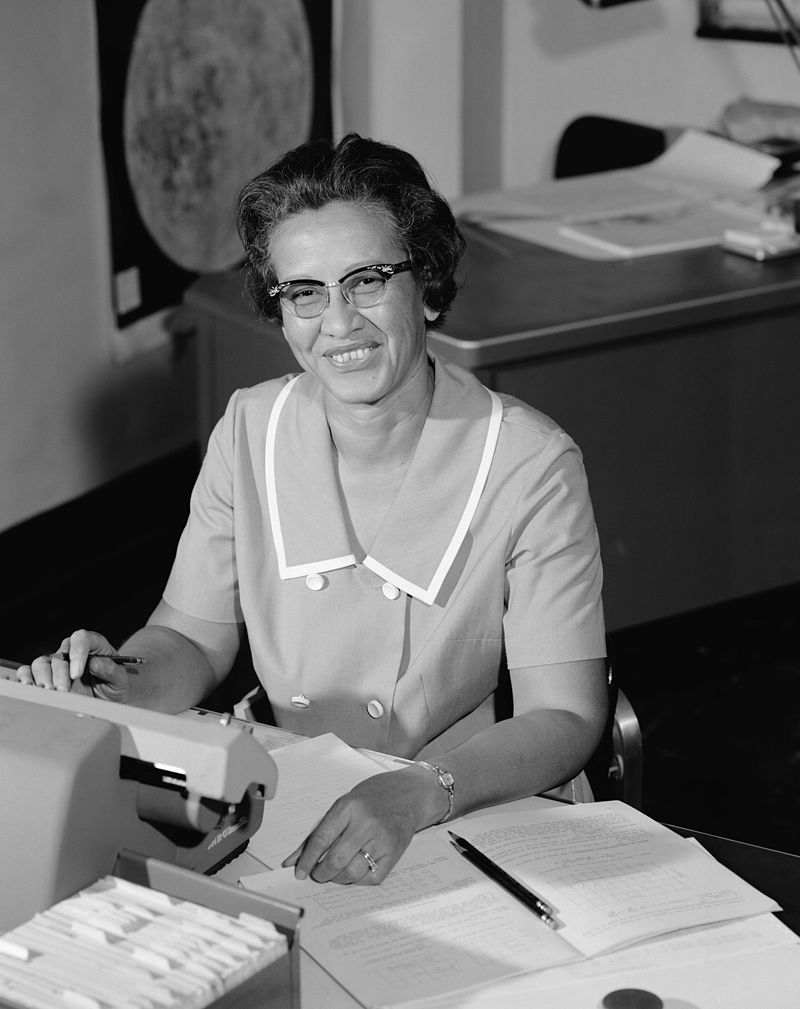 Main achievements: Calculating the trajectories for many NASA missions.

Katherine Coleman Goble Johnson is an African-American physicist and mathematician who made contributions to the United States' aeronautics and space programs with the early application of digital electronic computers at NASA. Known for accuracy in computerized celestial navigation, she conducted technical work at NASA that spanned decades. During this time, she calculated the trajectories, launch windows, and emergency back-up return paths for many flights from Project Mercury, including the early NASA missions of John Glenn and Alan Shepard, and the 1969 Apollo 11 flight to the Moon, through the Space Shuttle program. Her calculations were critical to the success of these missions. Johnson also did calculations for plans for a mission to Mars.

In 2015, Johnson received the Presidential Medal of Freedom. She was included in the BBC series 100 Women the following year.

Johnson was born Katherine Coleman in 1918 in White Sulphur Springs, Greenbrier County, West Virginia, the daughter of Joshua and Joylette Coleman. She was the youngest of four children. Her father was a lumberman, farmer, and handyman and worked at the Greenbrier Hotel. Her mother was a former teacher.

Johnson showed a talent for math from an early age. Because Greenbrier County did not offer public schooling for African-American students past the eighth grade, the Coleman parents arranged for their children to attend high school in Institute, West Virginia. This school was on the campus of West Virginia State College. Johnson was admitted when she was only 10 years old. The family split their time between Institute during the school year and White Sulphur Springs in the summer.

Johnson graduated from high school at 14 and entered West Virginia State College (now West Virginia State University), a historically black college. As a student, Johnson took every math course offered by the college. Multiple professors took Katherine under their wings, including chemist and mathematician Angie Turner King, who had mentored the girl throughout high school, and W.W. Schiefflin Claytor, the third African American to receive a PhD in math. Claytor added new math courses just for Katherine. She graduated summa cum laude in 1937, with degrees in Mathematics and French, at age 18. She took on a teaching job at a black public school in Virginia.

In 1939, after marrying her first husband, James Goble, Johnson left her teaching job and enrolled in a graduate math program, but quit after one year, having become pregnant and choosing to focus on her family. At the time of her entry, she was the first African-American woman to attend graduate school at West Virginia University in Morgantown, West Virginia. Through WVSC's president, Dr. John W. Davis, she became one of three African-American students, and the only female, selected to integrate the graduate school after the United States Supreme Court ruling Missouri ex rel. Gaines v. Canada (1938). The court had ruled that states that provided public higher education to white students also had to provide it to black students, to be satisfied either by establishing black colleges and universities or by admitting black students to previously white-only universities.

Johnson decided on a career as a research mathematician, although this was a difficult field for African Americans and women to enter. The first jobs she found were in teaching. It was not until 1952, at a family gathering, that a relative mentioned that the National Advisory Committee for Aeronautics (NACA) was hiring mathematicians. (It was superseded by the agency NASA in 1958.) At the Langley Memorial Aeronautical Laboratory, based in Hampton, Virginia near Langley Field, NACA hired African-American mathematicians as well as whites for their Guidance and Navigation Department. Johnson was offered a job in 1953. She accepted and became part of the early NASA team.

According to an oral history archived by the National Visionary Leadership Project: At first she worked in a pool of women performing math calculations. Katherine has referred to the women in the pool as virtual "computers who wore skirts." Their main job was to read the data from the black boxes of planes and carry out other precise mathematical tasks. Then one day, Katherine (and a colleague) were temporarily assigned to help the all-male flight research team. Katherine's knowledge of analytic geometry helped make quick allies of male bosses and colleagues to the extent that, "they forgot to return me to the pool." While the racial and gender barriers were always there, Katherine says she ignored them. Katherine was assertive, asking to be included in editorial meetings (where no women had gone before). She simply told people she had done the work and that she belonged.

From 1953 through 1958, Johnson worked as a "computer", analyzing topics such as gust alleviation for aircraft. Originally assigned to the West Area Computers section supervised by mathematician Dorothy Vaughan, Johnson was reassigned to the Guidance and Control Division of Langley's Flight Research Division. It was staffed by white male engineers. In keeping with state racial segregation laws, and federal workplace segregation introduced under President Woodrow Wilson in the early 20th century, Johnson and the other African-American women in the computing pool were required to work, eat, and use restrooms that were separate from those of their white peers. Their office was labeled as "Colored Computers." In an interview with WHRO-TV, Johnson stated that she "didn't feel the segregation at NASA, because everybody there was doing research. You had a mission and you worked on it, and it was important to you to do your job ... and play bridge at lunch." She added, "I didn't feel any segregation. I knew it was there, but I didn't feel it."

NACA disbanded the colored computing pool in 1958 when it was superseded by NASA, which adopted digital computers. The installation was desegregated. Society's discrimination against women had not yet ended, however. Johnson recalled that era as follows: "We needed to be assertive as women in those days—assertive and aggressive—and the degree to which we had to be that way depended on where you were. I had to be. In the early days of NASA women were not allowed to put their names on the reports—no woman in my division had had her name on a report. I was working with Ted Skopinski and he wanted to leave and go to Houston ... but Henry Pearson, our supervisor—he was not a fan of women—kept pushing him to finish the report we were working on. Finally, Ted told him, "Katherine should finish the report, she's done most of the work anyway." So Ted left Pearson with no choice; I finished the report and my name went on it, and that was the first time a woman in our division had her name on something."

From 1958 until her retirement in 1986, Johnson worked as an aerospace technologist, moving during her career to the Spacecraft Controls Branch. She calculated the trajectory for the May 5, 1961 space flight of Alan Shepard, the first American in space. She also calculated the launch window for his 1961 Mercury mission. She plotted backup navigational charts for astronauts in case of electronic failures. When NASA used electronic computers for the first time to calculate John Glenn's orbit around Earth, officials called on Johnson to verify the computer's numbers; Glenn had asked for her specifically and had refused to fly unless Johnson verified the calculations. Biography.com states these were "far more difficult calculations, to account for the gravitational pulls of celestial bodies." Author Margot Lee Shetterly stated, "So the astronaut who became a hero, looked to this black woman in the still-segregated South at the time as one of the key parts of making sure his mission would be a success." She added that, in a time where computing was "women's work" and engineering was left to men, "it really does have to do with us over the course of time sort of not valuing that work that was done by women, however necessary, as much as we might. And it has taken history to get a perspective on that."

Johnson later worked directly with digital computers. Her ability and reputation for accuracy helped to establish confidence in the new technology. In 1961, Johnson's work helped to ensure that Alan Shepard's Freedom 7 Mercury capsule would be quickly found after landing, using the accurate trajectory that had been established.

Johnson also helped to calculate the trajectory for the 1969 Apollo 11 flight to the Moon. During the moon landing, Johnson was at a meeting in the Pocono Mountains. She and a few others crowded around a small television screen watching the first steps on the moon. In 1970, Johnson worked on the Apollo 13 moon mission. When the mission was aborted, her work on backup procedures and charts helped set a safe path for the crew's return to Earth, creating a one-star observation system that would allow astronauts to determine their location with accuracy. In a 2010 interview, Johnson recalled, "Everybody was concerned about them getting there. We were concerned about them getting back." Later in her career, Johnson worked on the Space Shuttle program, the Earth Resources Satellite, and on plans for a mission to Mars.

In 2016, Johnson was included in the list of "BBC 100 Women," BBC's list of 100 influential women worldwide. NASA stated, "Her calculations proved as critical to the success of the Apollo Moon landing program and the start of the Space Shuttle program, as they did to those first steps on the country's journey into space."

Johnson has been portrayed in the media. In a 2016 episode of the NBC series Timeless, titled "Space Race," the mathematician is portrayed by Nadine Ellis. The highly-acclaimed December 2016 film Hidden Figures, based on the non-fiction book of the same title by Margot Lee Shetterly, follows Johnson and other female African-American mathematicians (Mary Jackson and Dorothy Vaughan) who worked at NASA. Taraji P. Henson plays Johnson in the film. Johnson appeared alongside Henson at the 89th Academy Awards. In an earlier interview, Johnson offered the following comment about the movie: "It was well-done. The three leading ladies did an excellent job portraying us."