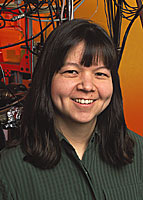 Born in Santa Clara County, California, Jin was one of three children, and grew up in Indian Harbour Beach, Florida. Her father was a physicist and her mother a physicist working as an engineer. Jin studied physics at Princeton University, graduating with an A.B. in 1990 and received her Ph.D. at the University of Chicago in 1995 under Thomas Felix Rosenbaum with the thesis title "Experimental Study of Phase Diagrams of Heavy Fermion Superconductors with Multiple Transitions".

In 1997, Jin formed a group at JILA, the Joint Institute for Laboratory Astrophysics in Boulder, Colorado. Within two years, she developed the ability to create the first quantum degenerate gas of fermionic atoms. The work was motivated by earlier studies of Bose-Einstein condensates and the ability to cool a dilute gas of atoms to 1 μK. The weak interactions between particles in a Bose-Einstein Condensate led to interesting physics. It was theorized that fermionic atoms would form an analogous state at low enough temperatures, with fermions pairing up in a phenomena similar to the creation of Cooper pairs in superconducting materials.

The work was complicated by the fact that, unlike bosons, fermions cannot occupy the same place at the same time and are therefore limited with regard to cooling mechanisms. To circumvent this issue, Jin and her team cooled potassium-40 atoms in two different magnetic sublevels. This enabled atoms in different sublevels to collide with each other, despite the fact that atoms of the same sublevel could not collide. The theorized 'quantum degeneracy' occurred at around 300 nK.

In 2003, Jin and her team were the first to condense pairs of fermionic atoms. They directly observed a molecular Bose-Einstein condensate created solely by adjusting the interaction strength in an ultracold Fermi gas of atoms. She was able to observe transitions of the gas between a Bardeen-Cooper-Schrieffer (BCS) state and Bose-Einstein Condensate (BEC) state.

Jin continued to advance the frontiers of ultracold science in 2008 when she and her colleague, Jun Ye, managed to cool polar molecules that possess a large electric dipole moment to ultracold temperatures. Rather than directly cool polar molecules, they created a gas of ultracold atoms and then transformed them into dipolar molecules in a coherent way. This work led to novel insights regarding the chemical reactions near absolute zero. They were able to observe and control potassium-rubidium (KRb) molecules in the lowest energy state (ground state). They were even able to observe molecules colliding and breaking and forming chemical bonds. Jin's husband, John Bohn, who specialized in the theory of ultracold atomic collisions, collaborated with her on this work.

Jin has won several prestigious awards: The MacArthur Fellowship "genius grant" in 2003; Scientific American's "Research Leader of the Year" in 2004; The Franklin Institute's The Franklin Institute Awards 2008 Benjamin Franklin Medal in Physics; L'Oréal-UNESCO For Women in Science Award Laureate for North America, for her work in ultracold gases of fermions in 2013; The Institute of physics Isaac Newton Medal; Comstock Prize in Physics 2014.