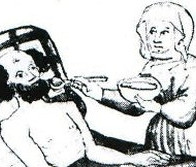 Main achievements: One of the eight female physicians in Paris at that time.

Jacqueline Felice de Almania was reportedly from Florence in Italy, and was active as a physician in Paris in 1322. She belonged to the minority of licensed female physicians of her time period, in 1292, there were eight female physicians registered in Paris.

In 1322, however, Jacobina Felicie was put on trial for unlawful practice. During the trial many testimonies were given where she was said to have cured patients where other physicians had failed and given up hope of the patient's recovery, and according to one witness, she was reputed to be a better physician and surgeon than any of the French physicians in Paris.

Despite the testimonies that she was able to cure people the male physicians had given up on, the court reasoned that it was obvious that a man could understand the subject of medicine better than a woman because of his gender. She was banned from practicing medicine and threatened with excommunication if she ever did so again. This decision is considered to have banned women from academic study in medicine in France and obtaining licenses until the 19th-century.