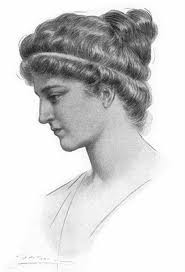 Main achievements: Head of the Platonist school at Alexandria.

Hypatia of Alexandria was a Greek Alexandrian Neoplatonist philosopher in Egypt. As head of the Platonist school at Alexandria, she taught philosophy and astronomy. As a Neoplatonist philosopher, she belonged to the mathematic tradition of the Academy of Athens, as represented by Eudoxus of Cnidus; she was of the intellectual school of the 3rd century thinker Plotinus, which encouraged logic and mathematical study in place of empirical enquiry and strongly encouraged law in place of nature. For followers of Plotinus the life of reason had as its ultimate goal mystical union with the divine.

According to contemporary sources, Hypatia was murdered by a Christian mob after being accused of exacerbating a conflict between two prominent figures in Alexandria: the governor Orestes and the Bishop of Alexandria. Kathleen Wider proposes that the murder of Hypatia marked the end of Classical antiquity, and Stephen Greenblatt observes that her murder "effectively marked the downfall of Alexandrian intellectual life".

The mathematician and philosopher Hypatia of Alexandria was the daughter of the mathematician Theon Alexandricus (c. 335 – c. 405). She was educated at Athens. Around AD 400, she became head of the Platonist school at Alexandria, where she imparted the knowledge of Plato and Aristotle to students, including pagans, Christians, and foreigners. Although contemporary 5th-century sources identify Hypatia of Alexandria as a practitioner and teacher of the philosophy of Plato and Plotinus, two hundred years later, the 7th-century Egyptian Coptic bishop John of Nikiû identified her as a Hellenistic pagan and that "she was devoted at all times to magic, astrolabes and instruments of music, and she beguiled many people through her Satanic wiles". However, not all Christians were as hostile towards her: some Christians even used Hypatia as symbolic of Virtue.

The contemporary Christian historiographer Socrates Scholasticus described her in Ecclesiastical History: “ There was a woman at Alexandria named Hypatia, daughter of the philosopher Theon, who made such attainments in literature and science, as to far surpass all the philosophers of her own time. Having succeeded to the school of Plato and Plotinus, she explained the principles of philosophy to her auditors, many of whom came from a distance to receive her instructions. On account of the self-possession and ease of manner which she had acquired in consequence of the cultivation of her mind, she not infrequently appeared in public in the presence of the magistrates. Neither did she feel abashed in going to an assembly of men. For all men on account of her extraordinary dignity and virtue admired her the more. ” —Socrates Scholasticus, Ecclesiastical History Hypatia corresponded with former pupil Synesius of Cyrene, who was tutored by her in the philosophical school of Platonism and later became bishop of Ptolemais in AD 410, an exponent of the Christian Holy Trinity doctrine. Together with the references by the pagan philosopher Damascius, these are the extant records left by Hypatia's pupils at the Platonist school of Alexandria.

The Byzantine Suda encyclopaedia reported that Hypatia was "the wife of Isidore the Philosopher" (apparently Isidore of Alexandria); however, Isidore of Alexandria was not born until long after Hypatia's death, and no other philosopher of that name contemporary with Hypatia is known. The Suda also stated that "she remained a virgin" and that she rejected a suitor with her menstrual rags, saying that they demonstrated that there is "nothing beautiful" about carnal desire—an example of a Christian source using Hypatia as a symbol of Virtue.