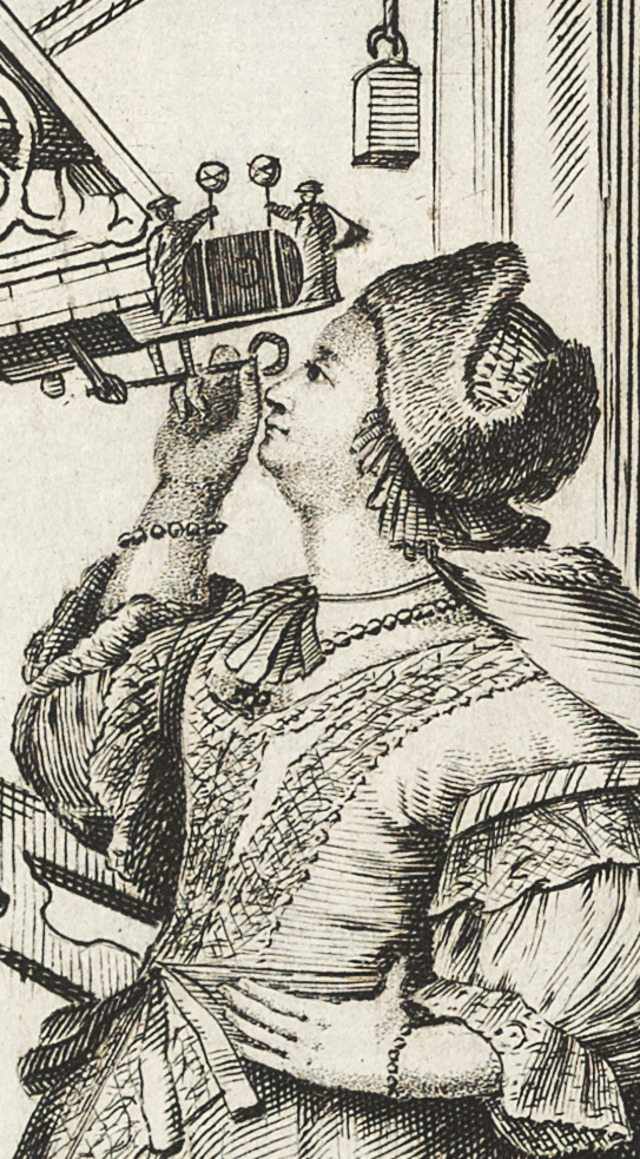 Main achievements: Author of the Catalogus Stellarum. One of the first female astronomers.

Elisabeth Catherina Koopmann Hevelius (in Polish also called Elzbieta Heweliusz) is considered one of the first female astronomers, and called "the mother of moon charts". She was also the second wife of fellow astronomer Johannes Hevelius. Elisabeth Koopmann (or Kaufmann, German: "merchant") was, like Hevelius and his first wife, a member of a rich merchant family in the city of Danzig (Gdansk) located in Pomeranian Voivodeship of the Polish-Lithuanian Commonwealth and a member of the trade organisation called Hansa. Elisabetha Koopman's parents were Nicholas Kooperman (or Cooperman) (1601-1672) who was a prosperous merchant and Joanna Mennings (or Menninx) (1602-1679). Nicholas and Joanna were married in Amsterdam in 1633. They moved from Amsterdam to Hamburg then, in 1636, they moved to Danzig. It was in this city, largely German speaking but a part of Poland at the time, that their daughter Elisabetha was born.

It was a fascination for astronomy which led Elisabetha, when still only a child, to approach Johannes Hevelius, an astronomer of international repute who had a complex of three houses in Danzig which contained the best observatory in the world. The marriage of the sixteen-year-old to fifty-two-year-old Hevelius in 1663 allowed her also to pursue her own interest in astronomy by helping him manage his observatory. They had a son, who died soon, and three daughters who survived. The eldest of the three daughters was named Catherina Elisabetha (after her mother) and baptized in St Catherine's Church, Danzig, on 14 February 1666. From the writings of Johann III Bernoulli we know that Elisabetha contracted small pox and was permanently scarred by it. Following his death in 1687, she completed and published Prodromus astronomiae (1690), their jointly compiled catalogue of 1,564 stars and their positions. Scholars know that she wrote in Latin since she had written letters to other scientists in Latin. They wonder why she would have had to learn Latin and why it would have been a priority for her at the time.

Published after the death of Johannes, and with support from King Sobieski, the Prodromus Astronomiae consisted of three separate parts: a preface (labeled Prodromus), a star catalog (named Catalogus Stellarum), and an atlas of constellations (named Firmamentum Sobiescianum, sive Uranographia).Prodromus outlines the methodology and technology used in creating the star catalogue. It provides examples of the use of the sextant and quadrant by Johannes, in tandem with known positions of the sun, in calculating each stars' longitude and latitude. The written draft of the Catalogus Stellarum consists of 183 leaves, 145, alphabetized according to constellation, containing star positions. Each star had specific information recorded in columns: the reference number and magnitude found by astronomer Tycho Brahe, Johannes' own magnitude calculation, the star's longitude and latitude by both ecliptic coordinates measured by angular distances and meridian altitudes found using Johannes' quadrant, and the star's equatorial coordinates calculated using spherical trigonometry. The printed version was similar to the written draft, except the two columns describing a star's ecliptic coordinates were combined, and only the single best value for the star's latitude and longitude was given. Also, the printed version held more than 600 new stars and 12 new constellations not documented in the written draft, bringing its total to 1564.

Although the observations of the catalog used nothing more than the astronomer's naked eye, the measurements were so precise as to be used in the making of celestial globes into the early 18th Century. Firmamentum Sobiescianum, while technically part of the Prodromus Astronomiae as a well, was likely published separately and in tighter circulation. Housing its own cover page and page-numbering system, the atlas consisted of two hemispheres and 54 double-page plates of 73 constellations. Both the northern and southern hemispheres were centered on an ecliptic pole, and most star locations were all based off Johannes' own observations. Those that were not, the southern polar stars, were based on a catalog and map published in 1679 by Edmond Halley. Elisabetha Hevelius died in December 1693, at the age of 46, and was buried in the same tomb as her husband. After her death, the mathematician François Arago wrote of her character: "A complimentary remark was always made about Madam Hevelius, who was the first woman, to my knowledge, who was not frightened to face the fatigue of making astronomical observations and calculations."