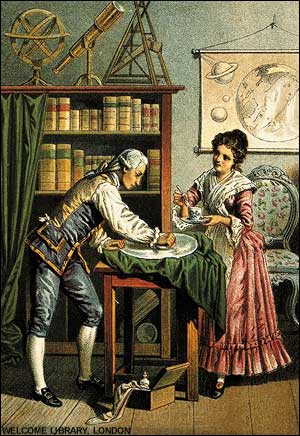 Main achievements: Discoveries of several comets. Production of a catalogue of stars.

Caroline Lucretia Herschel was a German British astronomer and the sister of astronomer Sir William Herschel with whom she worked throughout both of their careers. Her most significant contributions to astronomy were the discoveries of several comets and in particular the periodic comet 35P/Herschel-Rigollet, which bears her name. She was the first woman to be paid for her contribution to science, to be awarded a Gold Medal of the Royal Astronomical Society (1828), and to be named an Honorary Member of the Royal Astronomical Society (1835, with Mary Somerville). She was also named an honorary member of the Royal Irish Academy (1838). The King of Prussia presented her with a Gold Medal for Science, on the occasion of her 96th birthday (1846).

Caroline Lucretia Herschel was born at Hanover on 16 March 1750. She was the eighth child and fourth daughter of Isaac Herschel and his wife, Anna Ilse Moritzen. Isaac became a bandmaster in the Guards, was away with his regiment for substantial periods, and suffered ill-health after the battle of Dettingen in 1743. At the age of ten, Caroline was struck with typhus, which stunted her growth, so that she never grew past four-foot three. Her family assumed that she would never marry and her mother felt it was best for her to train to be a house servant. Her father wished her to receive an education, but her mother opposed this. Her father sometimes took advantage of her mother's absence to teach her directly or include her in her brother's lessons. Caroline was allowed to learn millinery and dress-making and worked hard at various types of fancy-work, with a view to someday supporting herself.

Following her father's death, her brother William proposed that she join him in Bath, England, "to make the trial if by his instruction I might not become a useful singer for his winter concerts and oratorios". Caroline eventually left Hanover on 16 August 1772, and accompanied her brother William back to England. There she took on the responsibilities of running his household, and learning to sing. William had established himself as an organist and music teacher at 19 New King Street, Bath, Somerset (now the Herschel Museum of Astronomy). He was also the choirmaster of the Octagon Chapel. William was busy with his musical career and became fairly busy organizing public concerts. Caroline took several singing lessons a day from William. She became the principal singer at his oratorio concerts, and acquired such a reputation as a vocalist that she was offered an engagement for the Birmingham festival. She declined to sing for any conductor but William. But it appears that Caroline did not blend in with the local society and made few friends.

William's interest in astronomy started as a hobby to pass time at night. At breakfast the next day he would give an impromptu lecture on what he had learned the night before. Caroline became as interested as William, stating that she was "much hindered in my practice by my help being continually wanted in the execution of the various astronomical contrivances." William became known for his work on high performance telescopes, and Caroline found herself supporting his efforts. Caroline possessed incredible dexterity in polishing mirrors and mounting telescopes. She learned to copy astronomical catalogues and other publications that William had borrowed. She also learned to record, reduce, and organise her brother’s astronomical observations. She recognised that this work demanded speed, precision and accuracy.

In 1782, William accepted the office of King's Astronomer to George III and moved to Datchet and subsequently to Observatory House near Slough (then in Buckinghamshire, now in Berkshire). The new job proved to be a mixed blessing; although it left him with ample free time to continue his astronomical observations, it also meant a reduction in income and being called upon by the king for entertainment at any time. During this time William perfected his telescope making, building a series of ever larger devices that ultimately ended with his famous 40-foot (12 m) focal length instrument. Caroline was his constant assistant in his observations, also performing the laborious calculations with which they were connected. During one such observation run on the large telescope in 1783, Caroline became caught on an iron hook and when she was helped off "...they could not lift me without leaving nearly 2 ounces (60 g) of my flesh behind." At William’s suggestion, Caroline began to make observations on her own in 1782. During her leisure hours she occupied herself with observing the sky with a 27-inch (690 mm) focal length Newtonian telescope and by this means detected a number of astronomical objects during the years 1783–87, including most notably an independent discovery of M110 (NGC 205), the second companion of the Andromeda Galaxy.

During 1786–97 she also discovered eight comets, her first comet being discovered on 1 August 1786. She had unquestioned priority as discoverer of five of the comets and rediscovered Comet Encke in 1795. In 1787, she was granted an annual salary of £50 (equivalent to £5,500 in 2014) by George III for her work as William's assistant. In 1797 William's observations had shown that there were a great many discrepancies in the star catalog published by John Flamsteed, which was difficult to use due to its having been published as two volumes, the catalogue proper and a volume of original observations. William realized that he needed a proper cross-index to properly explore these differences but was reluctant to devote time to it at the expense of his more interesting astronomical activities. He therefore recommended to Caroline that she undertake the task.

The resulting Catalogue of Stars was published by the Royal Society in 1798 and contained an index of every observation of every star made by Flamsteed, a list of errata, and a list of more than 560 stars that had not been included. Caroline returned to Hanover in 1822 following her brother's death, but did not abandon her astronomical studies, continuing to verify and confirm William's findings and producing a catalogue of nebulae to assist her nephew John Herschel in his work. In 1828 the Royal Astronomical Society presented her with their Gold Medal for this work – no woman would be awarded it again until Vera Rubin in 1996. Herschel was awarded a gold medal from the Astronomical Society of London, and another from the King of Prussia.

The gold medal from the Astronomical Society was awarded to her in 1828 "for her recent reduction, to January, 1800, of the Nebulæ discovered by her illustrious brother, which may be considered as the completion of a series of exertions probably unparalleled either in magnitude or importance in the annals of astronomical labour." She completed this work after her brother's death and her removal to Hanover. The Royal Astronomical Society elected her an Honorary Member in 1835, along with Mary Somerville; they were the first women members. In 1838 she was notified by Sir William Hamilton, Astronomer Royal, Dublin that she had also been elected as an honorary member of the Royal Irish Academy in Dublin. In 1846, at the age of 96, she was awarded a Gold Medal for Science by the King of Prussia, conveyed to her by Alexander von Humboldt, "in recognition of the valuable services rendered to Astronomy by you, as the fellow-worker of your immortal brother, Sir William Herschel, by discoveries, observations, and laborious calculations". The asteroid 281 Lucretia (discovered 1888) was named after Caroline's second given name, and the crater C. Herschel on the Moon is named after her. Adrienne Rich's 1968 poem Planetarium celebrated Caroline Herschel's life and scientific achievements.