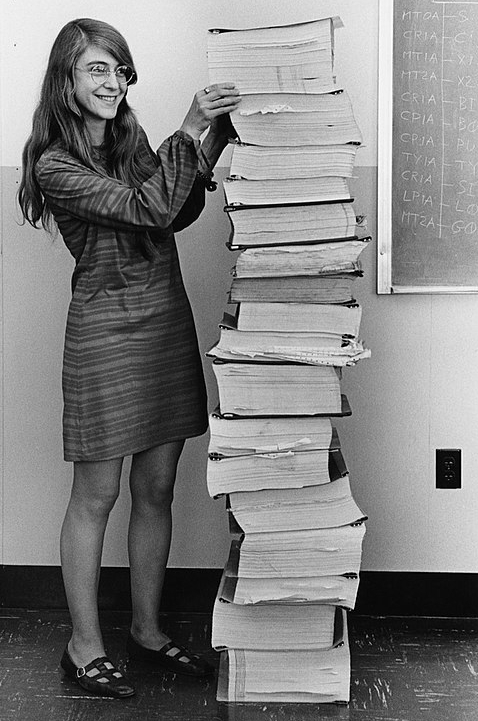 Margaret Heafield Hamilton is an American computer scientist, systems engineer, and business owner. She was Director of the Software Engineering Division of the MIT Instrumentation Laboratory, which developed on-board flight software for the Apollo space program. In 1986, she became the founder and CEO of Hamilton Technologies, Inc., in Cambridge, Massachusetts. The company was developed around the Universal Systems Language based on her paradigm of Development Before the Fact (DBTF) for systems and software design.

Hamilton has published over 130 papers, proceedings, and reports about the 60 projects and six major programs in which she has been involved. On November 22, 2016, she was awarded the Presidential Medal of Freedom by U.S. President Barack Obama for her work leading the development of on-board flight software for NASA's Apollo Moon missions.

Margaret Heafield was born in Paoli, Indiana, to Kenneth Heafield and Ruth Esther Heafield (née Partington). After graduating from Hancock High School in 1954, she started out in mathematics at the University of Michigan in 1955 and subsequently earned a B.A. in mathematics with a minor in philosophy from Earlham College in 1958. She briefly taught high school mathematics and French upon graduation, in order to support her husband while he worked on his undergraduate degree at Harvard, with the ultimate goal of pursuing a graduate degree at a later time. She moved to Boston, Massachusetts, with the intention of doing graduate study in abstract mathematics at Brandeis University. She cites a female math professor as helping her desire to pursue abstract mathematics. She had other inspirations outside the technological world, including her father, the philosopher and poet, and her grandfather, a school headmaster and Quaker Minister. She says these men inspired her to a minor in philosophy. In 1960 she took an interim position at MIT to develop software for predicting weather on the LGP-30 and the PDP-1 computers (at Marvin Minsky's Project MAC) for professor Edward Norton Lorenz in the meteorology department. Hamilton wrote that at that time, computer science and software engineering were not yet disciplines; instead, programmers learned on the job with hands-on experience.

From 1961 to 1963, she worked on the SAGE Project at Lincoln Lab, where she was one of the programmers who wrote software for the first AN/FSQ-7 computer (the XD-1), to search for "unfriendly" aircraft; she also wrote software for the Air Force Cambridge Research Laboratories. The SAGE Project was an extension of Project Whirlwind, started by MIT, to create a computer system that could predict weather systems and track their movements through simulators; SAGE was soon developed for military use in anti-aircraft air defense from potential Soviet attacks during the Cold War. For her part, Hamilton described her duties as such,

What they used to do when you came into this organization as a beginner, was to assign you this program which nobody was able to ever figure out or get to run. When I was the beginner they gave it to me as well. And what had happened was it was tricky programming, and the person who wrote it took delight in the fact that all of his comments were in Greek and Latin. So I was assigned this program and I actually got it to work. It even printed out its answers in Latin and Greek. I was the first one to get it to work. It was her efforts on this project that made her a candidate for the position at NASA as the lead developer for Apollo flight software.

Hamilton then joined the Charles Stark Draper Laboratory at MIT, which at the time was working on the Apollo space mission. She eventually led a team credited with developing the software for Apollo and Skylab. Hamilton's team was responsible for developing in-flight software, which included algorithms designed by various senior scientists for the Apollo command module, lunar lander, and the subsequent Skylab. Another part of her team designed and developed the systems software which included the error detection and recovery software such as restarts and the Display Interface Routines (AKA the Priority Displays) which Hamilton designed and developed. She worked to gain hands-on experience during a time when computer science courses were uncommon and software engineering courses did not exist.

In one of the critical moments of the Apollo 11 mission, the Apollo Guidance Computer together with the on-board flight software averted an abort of the landing on the Moon. Three minutes before the Lunar lander reached the Moon's surface, several computer alarms were triggered. The computer was overloaded with interrupts caused by incorrectly phased power supplied to the lander's rendezvous radar. The program alarms indicated "executive overflows", meaning the guidance computer could not complete all of its tasks in real time and had to postpone some of them. The asynchronous executive designed by J. Halcombe Laning allowed the computer to cope with the increased demand by prioritizing tasks. Hamilton's priority alarm displays interrupted the astronauts' normal displays to warn them that there was an emergency “giving the astronauts a go/no go decision (to land or not to land)”. Jack Garman, a NASA computer engineer in mission control, recognized the meaning of the errors that were presented to the astronauts by the priority displays and shouted, "Go, go!" And on they went. Dr. Paul Curto, senior technologist who nominated Hamilton for a NASA Space Act Award, called Hamilton's work "the foundation for ultra-reliable software design."