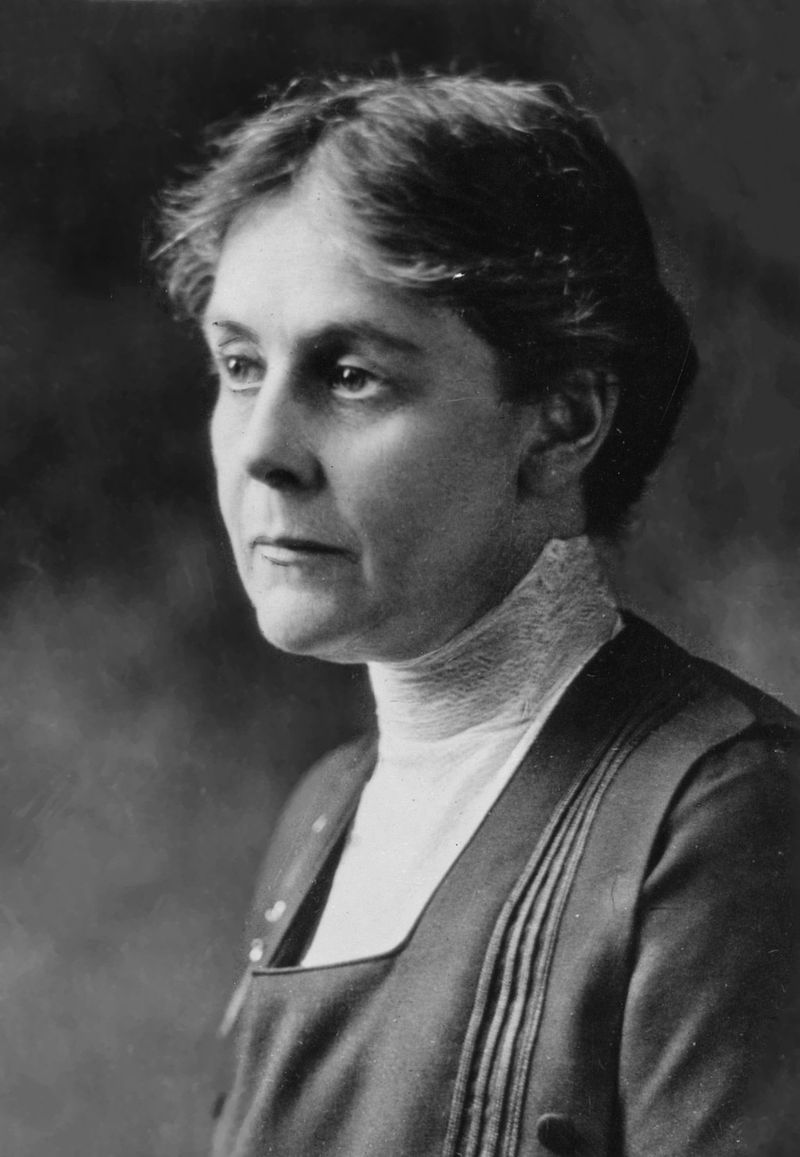 Main achievements: Pioneer in the field of industrial toxicology

Alice Hamilton was an American physician, research scientist, and author who is best known as a leading expert in the field of occupational health and a pioneer in the field of industrial toxicology. Hamilton trained at the University of Michigan Medical School. She became a professor of pathology at the Woman's Medical School of Northwestern University in 1897. In 1919, she became the first woman appointed to the faculty of Harvard University. Her scientific research focused on the study of occupational illnesses and the dangerous effects of industrial metals and chemical compounds. In addition to her scientific work, Hamilton was a social-welfare reformer, humanitarian, peace activist, and a resident-volunteer at Hull House in Chicago from 1887 to 1919. She was the recipient of numerous honors and awards, most notably the Albert Lasker Public Service Award for her public-service contributions.

Hamilton studied science with a high school teacher in Fort Wayne and anatomy at Fort Wayne College of Medicine for a year before enrolling at the University of Michigan Medical School in 1892. There she had the opportunity of studying with "a remarkable group of men" – John Jacob Abel (pharmacology), William Henry Howell (physiology), Frederick George Novy (bacteriology), Victor C. Vaughan (biochemistry) and George Dock (medicine). During her last year of study she served on Dr. Dock's staff, going on rounds, taking histories and doing clinical laboratory work. Hamilton earned a medical degree from the university in 1893.

In 1893–94, after graduation from medical school, Hamilton completed internships at the Northwestern Hospital for Women and Children in Minneapolis and at the New England Hospital for Women and Children in Roxbury, a suburban neighborhood of Boston, Massachusetts, to gain some clinical experience. Hamilton had already decided that she was not interested in establishing a medical practice and returned to the University of Michigan in February 1895 to study bacteriology as a resident graduate and lab assistant of Frederick George Novy. She also began to develop an interest in public health.

In the fall of 1895, Alice and her older sister, Edith, traveled to Germany. Alice planned to study bacteriology and pathology at the advice of her professors at Michigan, while Edith intended to study the classics and attend lectures. The Hamilton sisters faced some opposition to their efforts to study abroad. Although Alice was welcomed in Frankfurt, her requests to study in Berlin were rejected and she experienced some prejudice against women when the two sisters studied at universities in Munich and Leipzig.

When Alice returned to the United States in September 1896, she continued postgraduate studies for a year at the Johns Hopkins University Medical School. There she worked with Simon Flexner on pathological anatomy. She also had the opportunity to learn from William H. Welch and William Osler.

In 1897 Hamilton accepted an offer to become a professor of pathology at the Woman's Medical School of Northwestern University. Soon after her move to Chicago, Illinois, Hamilton fulfilled a longtime ambition to become a member and resident of Hull House, the settlement house founded by social reformer Jane Addams and Ellen Gates Starr. While Hamilton taught and did research at the medical school during the day, she maintained an active life at Hull House, her full-time residence from 1897 to 1919. Hamilton became Jane Addams' personal physician and volunteered her time at Hull House to teach English and art. She also directed the men's fencing and athletic clubs, operated a well-baby clinic, and visited the sick in their homes. Other inhabitants of Hull House included Alice's sister Norah, and her friends Rachelle and Victor Yarros. Although Hamilton moved away from Chicago in 1919 when she accepted a position as an assistant professor at Harvard Medical School, she returned to Hull House and stayed for several months each spring until Jane Addams's death in 1935.

Through her association and work at Hull House and living side by side with the poor residents of the community, Hamilton witnessed the effects that the dangerous trades had on workers' health through exposure to carbon monoxide and lead poisoning. As a result, she became increasingly interested in the problems the workers faced, especially occupational injuries and illnesses. The experience also caused Hamilton to begin considering how to merge her interests in medical science and social reform to improve the health of American workers.

When the Woman's Medical School closed in 1902, Hamilton took a position as bacteriologist with the Memorial Institute for Infectious Diseases, working with Ludvig Hektoen. During this time, she also formed a friendship with bacteriologist Ruth Tunnicliffe. Hamilton investigated a typhoid epidemic in Chicago before focusing her research on the investigation of industrial diseases. Some of Hamilton's early research in this area included attempts to identify causes of typhoid and tuberculosis in the community surrounding Hull House. Her work on typhoid in 1902 led to the replacement of the chief sanitary inspector of the area by the Chicago Board of Health.

The study of industrial medicine (work-related illnesses) had become increasingly important because the Industrial Revolution of the late nineteenth century had led to new dangers in the workplace. In 1907 Hamilton began exploring existing literature from abroad and noticed that industrial medicine was not being studied as much in America. She set out to change the situation and published her first article on the topic in 1908.

Hamilton began her long career in public health and workplace safety in 1910, when Illinois governor Charles S. Deneen appointed her as a medical investigator to the newly formed Illinois Commission on Occupational Diseases. Hamilton led the commission's investigations, which focused on industrial poisons such as lead and other toxins. She also authored the "Illinois Survey," the commission's report that documented its findings of industrial processes that exposed workers to lead poisoning and other illnesses. The commission's efforts resulted in the passage of the first workers' compensation laws in Illinois in 1911, in Indiana in 1915, and occupational disease laws in other states. The new laws required employers to take safety precautions to protect workers.

By 1916 Hamilton had become America's leading authority on lead poisoning. For the next decade she investigated a range of issues for a variety of state and federal health committees. Hamilton focused her explorations on occupational toxic disorders, examining the effects of substances such as aniline dyes, carbon monoxide, mercury, tetraethyl lead, radium, benzene, carbon disulfide and hydrogen sulfide gases. In 1925, at a Public Health Service conference on the use of lead in gasoline, she testified against the use of lead and warned of the danger it posed to people and the environment. Nevertheless, leaded gasoline was allowed. The EPA in 1988 estimated that over the previous 60 years that 68 million children suffered high toxic exposure to lead from leaded fuels.

Her work on the manufacture of white lead and lead oxide, as a special investigator for the U.S. Bureau of Labor Statistics, is considered a "landmark study". Relying primarily on "shoe leather epidemiology" (her process of making personal visits to factories, conducting interviews with workers, and compiling details of diagnosed poisoning cases) and the emerging laboratory science of toxicology, Hamilton pioneered occupational epidemiology and industrial hygiene. She also created the specialized field of industrial medicine in the United States. Her findings were scientifically persuasive and influenced sweeping health reforms that changed laws and general practice to improve the health of workers.

During World War I, the US Army tasked her with solving a mysterious ailment striking workers at a munitions plant in New Jersey. She led a team that included George Minot, a professor at Harvard Medical School. She deduced that the workers were being sickened through contact with the explosive trinitrotoluene (TNT). She recommended that workers wear protective clothing to be removed and washed at the end of each shift, solving the problem.

Hamilton's best-known research included her studies on carbon monoxide poisoning among American steelworkers, mercury poisoning of hatters, and "a debilitating hand condition developed by workers using jackhammers." At the request of the U.S. Department of Labor, she also investigated industries involved in developing high explosives, "spastic anemia known as 'dead fingers'" among Bedford, Indiana, limestone cutters, and the "unusually high incidence of pulmonary tuberculosis" among tombstone carvers working in the granite mills of Quincy, Massachusetts, and Barre, Vermont. Hamilton was also a member of the Committee for the Scientific Investigation of the Mortality from Tuberculosis in Dusty Trades, whose efforts "laid the groundwork for further studies and eventual widespread reform in the industry."

In January 1919, Hamilton accepted a position as assistant professor in a newly formed Department of Industrial Medicine (and after 1925 the School of Public Health) at Harvard Medical School, making her the first woman appointed to the Harvard University faculty in any field. Her appointment was hailed by the New York Tribune with the headline: "A Woman on Harvard Faculty—The Last Citadel Has Fallen—The Sex Has Come Into Its Own". Her own comment was "Yes, I am the first woman on the Harvard faculty—but not the first one who should have been appointed!"

During her years at Harvard, from 1919 to her retirement in 1935, Hamilton never received a faculty promotion and held only a series of three-year appointments. At her request, the half-time appointments for which she taught one semester per year allowed her to continue her research and spend several months of each year at Hull House. Hamilton also faced discrimination as a woman. She was excluded from social activities, could not enter the Harvard Union, attend the Faculty Club, or receive a quota of football tickets. In addition, Hamilton was not allowed to march in the university's commencement ceremonies as the male faculty members did.

Hamilton became a successful fundraiser for Harvard as she continued to write and conduct research on the dangerous trades. In addition to publishing "landmark reports for the U.S. Department of Labor" on research related to workers in Arizona copper mines and stonecutters at Indiana's limestone quarries, Hamilton also wrote Industrial Poisons in the United States (1925), the first American textbook on the subject, and another related textbook, Industrial Toxicology (1934). At tetraethyl lead conference in Washington, D.C. in 1925, Hamilton was a prominent critic of adding tetraethyl lead to gasoline.

Hamilton also remained an activist in social reform efforts. Her specific interests in civil liberties, peace, birth control, and protective labor legislation for women caused some of her critics to consider her a "radical" and a "subversive." From 1924 to 1930, she served as the only woman member of the League of Nations Health Committee. She also visited the Soviet Union in 1924 and Nazi Germany in April 1933. Hamilton wrote "The Youth Who Are Hitler's Strength," which was published in The New York Times. The article described Nazi exploitation of youth in the years between the two world wars. She also criticized the Nazi education, especially its domestic training for girls.