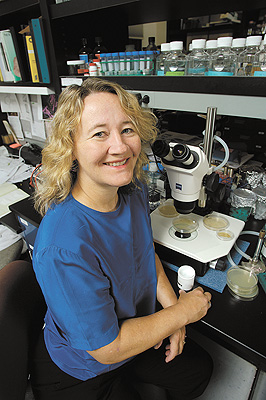 Main achievements: Pioneered research on the structure of telomeres.

Carolyn Widney "Carol" Greider is an American molecular biologist. She is Daniel Nathans Professor and Director of Molecular Biology and Genetics at Johns Hopkins University. She discovered the enzyme telomerase in 1984, when she was a graduate student of Elizabeth Blackburn at the University of California, Berkeley.

Greider pioneered research on the structure of telomeres, the ends of the chromosomes. She was awarded the 2009 Nobel Prize for Physiology or Medicine, along with Blackburn and Jack W. Szostak, for their discovery that telomeres are protected from progressive shortening by the enzyme telomerase.

While at U.C. Berkeley, Greider co-discovered telomerase, a key enzyme in cancer and anemia research, along with Blackburn. Greider then completed her postdoctoral work, and also held a faculty position, at the Cold Spring Harbor Laboratory, Long Island, New York. During this time, Greider, in collaboration with Ronald A. DePinho, produced the first telomerase knockout mouse, showing that although telomerase is dispensable for life, increasingly short telomeres result in various deleterious phenotypes, colloquially referred to as premature aging. In the mid-1990s, Greider was recruited by Michael D. West, founder of biotechnology company Geron (now CEO of BioTime) to join the company's Scientific Advisory Board. She resigned from the cooperation in 1994 in a disagreement over how Geron marketed telomere research.

She next moved on to a faculty position at the Johns Hopkins University in 1997, where she remains employed. Greider is the Daniel Nathans Professor and the Director of Molecular Biology and Genetics at the Johns Hopkins Institute of Basic Biomedical Sciences. Greider has two children: Charles and Gwendolyn. Greider joined the laboratory of Elizabeth Blackburn in April, 1984, and took on a project Blackburn considered intimidating: finding the enzyme that was hypothesized to add extra DNA bases to the ends of chromosomes. Without the extra bases, which are added as repeats of a six base pair motif, chromosomes are shortened during DNA replication, eventually resulting in chromosome deterioration and senescence or cancer-causing chromosome fusion. Blackburn and Greider looked for the enzyme in the model organism Tetrahymena thermophila, a fresh-water protozoan with a large number of telomeres. Blackburn reports that Greider approached the research with diligence, often working twelve-hour shifts in the lab.

On Christmas Day, 1984, Greider first obtained results indicating that she had found the responsible enzyme. An additional six months of research led Greider and Blackburn to the conclusion that they had, indeed, identified the enzyme responsible for telomere addition. They published their findings in the journal Cell in December, 1985. The enzyme, originally called "telomere terminal transferase," is now known as telomerase.