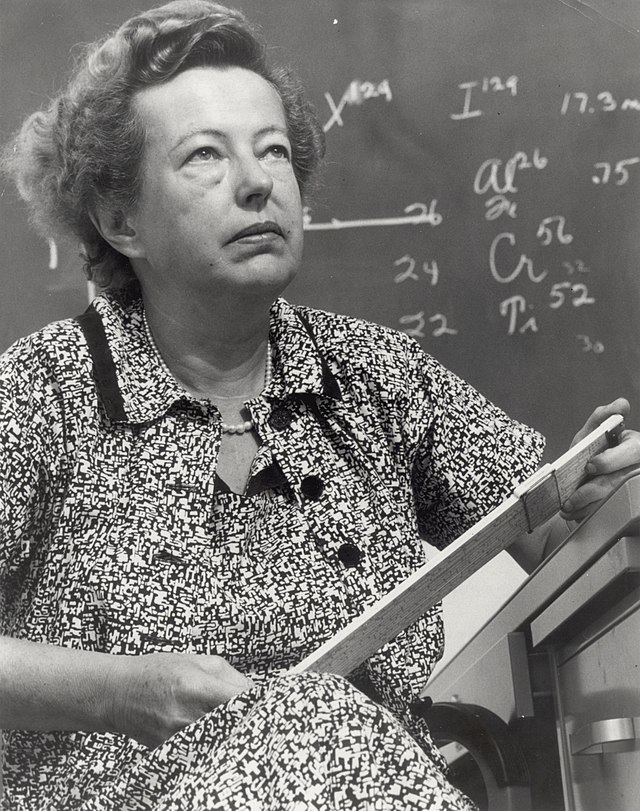 Main achievements: Discovery of the nuclear shell model of the atomic nucleus.

A graduate of the University of Göttingen, Goeppert Mayer wrote her doctorate on the theory of possible two-photon absorption by atoms. At the time, the chances of experimentally verifying her thesis seemed remote, but the development of the laser permitted this. Today, the unit for the two-photon absorption cross section is named the Goeppert Mayer (GM) unit. Goeppert Mayer married Joseph Edward Mayer, and moved to the United States, where he was an associate professor at Johns Hopkins University. Strict rules against nepotism prevented Johns Hopkins University from taking her on as a faculty member, but she was given a job as an assistant and published a landmark paper on double beta decay in 1935. In 1937, she moved to Columbia University, where she took an unpaid position. During World War II, she worked for the Manhattan Project at Columbia on isotope separation, and with Edward Teller at the Los Alamos Laboratory on the development of the Teller's "Super" bomb.

After the war, Goeppert Mayer became a voluntary associate professor of Physics at the University of Chicago (where Teller and her husband worked) and a senior physicist at the nearby Argonne National Laboratory. She developed a mathematical model for the structure of nuclear shells, for which she was awarded the Nobel laureate in physics in 1963, which she shared with J. Hans D. Jensen and Eugene Wigner. In 1960, she was appointed full professor of physics at the University of California at San Diego.

Maria Goeppert was born on June 28, 1906, in Kattowitz, a city in Prussia, the only child of Friedrich Goeppert and his wife Maria née Wolff. In 1910, she moved with her family to Göttingen when her father, a sixth-generation university professor, was appointed as the professor of pediatrics at the University of Göttingen. Goeppert was closer to her father than her mother. "Well, my father was more interesting," she later explained. "He was after all a scientist." Goeppert was educated at the Höhere Technische in Göttingen, a school for middle-class girls who aspired to higher education.[5] In 1921, she entered the Frauenstudium, a private high school run by suffragettes that aimed to prepare girls for university. She took the abitur, the university entrance examination, at age 17, a year early, with three or four girls from her school and thirty boys. All the girls passed, but only one of the boys did. In the Spring of 1924, Goeppert entered the University of Göttingen, where she studied mathematics. A purported shortage of women mathematics teachers for schools for girls led to an upsurge of women studying mathematics at a time of high unemployment, and there was even a female professor of mathematics at Göttingen, Emmy Noether, but most were only interested in qualifying for their teaching certificate. Instead, Goeppert became interested in physics, and chose to pursue a Ph.D.

In her 1930 doctoral thesis she worked out the theory of possible two-photon absorption by atoms. Eugene Wigner later described the thesis as "a masterpiece of clarity and concreteness". At the time, the chances of experimentally verifying her thesis seemed remote, but the development of the laser permitted the first experimental verification in 1961 when two-photon-excited fluorescence was detected in a europium-doped crystal. To honor her fundamental contribution to this area, the unit for the two-photon absorption cross section is named the Goeppert Mayer (GM) unit. Her examiners were three future Nobel prize winners: Max Born, James Franck and Adolf Otto Reinhold Windaus.

On January 19, 1930, Goeppert married Joseph Edward Mayer, an American Rockefeller fellow who was one of James Franck's assistants. The two had met when Mayer had boarded with the Goeppert family. The couple moved to Mayer's home country of the United States, where he had been offered a position as associate professor of chemistry at Johns Hopkins University. They had two children, Maria Ann and Peter Conrad. Strict rules against nepotism prevented Johns Hopkins University from hiring Goeppert Mayer as a faculty member, but she was given a job as an assistant in the Physics Department working with German correspondence. She received a very small salary, a place to work and access to the facilities. She taught some courses, and published an important paper on double beta decay in 1935. There was little interest in quantum mechanics at Johns Hopkins, but Goeppert Mayer worked with Karl Herzfeld, collaborating on a number of papers. She also returned to Göttingen in the summers of 1931, 1932 and 1933 to work with her former examiner Born, writing an article with him for the Handbuch der Physik. This ended when the NSDAP came to power in 1933, and many academics, including Born and Franck, lost their jobs. Goeppert Mayer and Herzfeld became involved in refugee relief efforts. Joe Mayer was fired in 1937. He attributed this to the hatred of women on the part of the dean of physical sciences, which he thought was provoked by Goeppert Mayer's presence in the laboratory. Herzfeld agreed and added that, with Goeppert Mayer, Franck and Herzfeld all at Johns Hopkins, some thought that there were too many German scientists there. There were also complaints from some students that Mayer's chemistry lectures contained too much modern physics. Mayer took up a position at Columbia University, where the chairman of the Physics Department, George Pegram, arranged for Goeppert Mayer to have an office, but she received no salary. She soon made good friends with Harold Urey and Enrico Fermi, who arrived at Columbia in 1939. Fermi asked her to investigate the valence shell of the undiscovered transuranic elements. Using the Thomas–Fermi model, she predicted that they would form a new series similar to the rare earth elements. This proved to be correct.

In December 1941, Goeppert Mayer took up her first paid professional position, teaching science part-time at Sarah Lawrence College. In the spring of 1942, with the United States embroiled in World War II, she joined the Manhattan Project. She accepted a part-time research post from Urey with Columbia University's Substitute Alloy Materials (SAM) Laboratory. The objective of this project was to find a means of separating the fissile uranium-235 isotope in natural uranium; she researched the chemical and thermodynamic properties of uranium hexafluoride and investigated the possibility of separating isotopes by photochemical reactions. This method proved impractical at the time, but the development of lasers would later open the possibility of separation of isotopes by laser excitation. Through her friend Edward Teller, Goeppert Mayer was given a position at Columbia with the Opacity Project, which researched the properties of matter and radiation at extremely high temperatures with an eye to the development of the Teller's "Super" bomb, the wartime program for the development of thermonuclear weapons. In February 1945, Joe was sent to the Pacific War, and Goeppert Mayer decided to leave her children in New York and join Teller's group at the Los Alamos Laboratory. Joe came back from the Pacific earlier than expected, and they returned to New York together in July 1945. In February 1946, Joe became a professor in the Chemistry Department and the new Institute for Nuclear Studies at the University of Chicago, and Goeppert Mayer was able to become a voluntary associate professor of Physics at the school. When Teller also accepted a position there, she was able to continue her Opacity work with him. When the nearby Argonne National Laboratory was founded on July 1, 1946, Goeppert Mayer was also offered a part-time job there as a senior physicist in the Theoretical Physics Division. She responded "I don't know anything about nuclear physics." She programmed the Aberdeen Proving Ground's ENIAC to solved criticality problems for a liquid metal cooled reactor using the Monte Carlo method.

During her time at Chicago and Argonne in the late 1940s, Goeppert Mayer developed a mathematical model for the structure of nuclear shells, which she published in 1950. Her model explained why certain numbers of nucleons in an atomic nucleus result in particularly stable configurations. These numbers are what Eugene Wigner called magic numbers: 2, 8, 20, 28, 50, 82, and 126. Enrico Fermi provided a critical insight by asking her: "Is there any indication of spin orbit coupling?" She realised that this was indeed the case, and postulated that the nucleus is a series of closed shells and pairs of neutrons and protons tend to couple together. She described the idea as follows: Think of a room full of waltzers. Suppose they go round the room in circles, each circle enclosed within another. Then imagine that in each circle, you can fit twice as many dancers by having one pair go clockwise and another pair go counterclockwise. Then add one more variation; all the dancers are spinning twirling round and round like tops as they circle the room, each pair both twirling and circling. But only some of those that go counterclockwise are twirling counterclockwise. The others are twirling clockwise while circling counterclockwise. The same is true of those that are dancing around clockwise: some twirl clockwise, others twirl counterclockwise. Three German scientists, Otto Haxel, J. Hans D. Jensen, and Hans Suess, were also working on solving the same problem, and arrived at the same conclusion independently. Their results were announced in the issue of the Physical Review before Goeppert Mayer 's announcement in June 1949. Afterwards, she collaborated with them. Hans Jensen co-authored a book with Goeppert Mayer in 1950 titled Elementary Theory of Nuclear Shell Structure.

In 1963, Goeppert Mayer, Jensen, and Wigner shared the Nobel prize for physics "for their discoveries concerning nuclear shell structure." She was the second female Nobel laureate in physics, after Marie Curie. In 1960, Goeppert Mayer was appointed full professor of physics at the University of California at San Diego. Although she suffered from a stroke shortly after arriving there, she continued to teach and conduct research for a number of years. She was elected a Fellow of the American Academy of Arts and Sciences in 1965. Goeppert Mayer died in San Diego, California, on February 20, 1972, after a heart attack that had struck her the previous year left her comatose. She was buried at El Camino Memorial Park in San Diego.

After her death, the Maria Goeppert Mayer Award was created by the American Physical Society to honor young female physicists at the beginning of their careers. Open to all female physicists who hold Ph.D.s, the winner receives money and the opportunity to give guest lectures about her research at four major institutions. Two of her former universities also honor her. The Argonne National Laboratory presents an award each year to an outstanding young woman scientist or engineer, while the University of California at San Diego hosts an annual Maria Goeppert Mayer symposium, bringing together female researchers to discuss current science. Crater Goeppert Mayer on Venus with a diameter of about 35 km is also named after Goeppert-Mayer. In 2011, she was included in the third issuance of the American Scientists collection of US postage stamps, along with Melvin Calvin, Asa Gray, and Severo Ochoa. Her papers are in the Geisel Library at the University of California at San Diego.