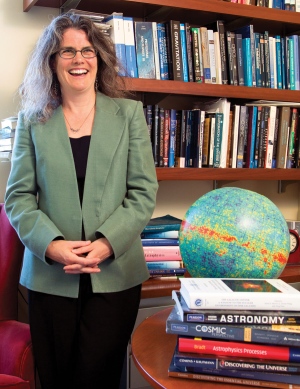 Andrea Mia Ghez is an American astronomer and professor in the Department of Physics and Astronomy at UCLA, known for studying the center of the Milky Way galaxy. In 2020, she became the fourth woman to be awarded the Nobel Prize in Physics, sharing one half of the prize with Reinhard Genzel (the other half of the prize being awarded to Roger Penrose). The Nobel Prize was awarded to Ghez and Genzel for their discovery of a supermassive compact object, now generally recognized to be a black hole, in the Milky Way's galactic center.

Ghez was raised in Chicago and attended the University of Chicago Lab School. The Apollo program's Moon landings inspired Ghez to want to become the first female astronaut and her mother supported her goal. Her most influential female role model was her high school chemistry teacher. She started out in college by majoring in mathematics but changed to physics. She received a BS in physics from the Massachusetts Institute of Technology in 1987 and her Ph.D. under the direction of Gerry Neugebauer at the California Institute of Technology in 1992.

Her current research involves using high spatial resolution imaging techniques, such as the adaptive optics system at the Keck telescopes, to study star-forming regions and the supermassive black hole at the center of the Milky Way known as Sagittarius A*. She uses the kinematics of stars near the center of the Milky Way as a probe to investigate this region. The high resolution of the Keck telescopes gave a significant improvement over the first major study of galactic center kinematics by Reinhard Genzel's group.

In 2004, Ghez was elected to the National Academy of Sciences, and in 2019, she was elected as a Fellow of the American Physical Society.

She has appeared in a long list of notable media presentations. The documentaries have been produced by organizations such as the BBC, Discovery Channel, and The History Channel, and in 2006 there was a presentation on the PBS television series Nova. She was identified as a Science Hero by The My Hero Project. In 2004, Discover magazine listed Ghez as one of the top 20 scientists in the United States who have shown a high degree of understanding in their respective fields.

By imaging the Galactic Center at infrared wavelengths, Ghez and her colleagues have been able to peer through heavy dust that blocks visible light, and to produce images of the center of the Milky Way. Thanks to the 10 m aperture of the W.M. Keck Telescope and the use of adaptive optics to correct for the turbulence of the atmosphere, these images of the Galactic Center are at very high spatial resolution and have made it possible to follow the orbits of stars around the black hole, which is also known as Sagittarius A* or Sgr A*. The partial orbits of many stars orbiting the black hole at the Galactic Center have been observed. One of the stars, S2, has made a complete elliptical orbit since detailed observations began in 1995. Several decades more will be required to completely document the orbits of some of these stars; these measurements may provide a test of the theory of general relativity. In October 2012, a second star was identified by her team at UCLA, S0-102, orbiting the Galactic Center. Using Kepler's third law, Ghez's team has used the orbital motion to show that the mass of Sgr A* is 4.1±0.6 million solar masses. Because the Galactic Center (where Sgr A* is located) is one hundred times closer than M31 (where the next nearest known supermassive black hole M31* is located), it is now one of the best demonstrated cases for a supermassive black hole.

In 2020, Ghez shared the Nobel Prize in Physics with Roger Penrose and Reinhard Genzel, for their discoveries relating to black holes. Specifically, Ghez and Genzel were awarded one half of the prize for their discovery that a supermassive black hole, most likely, governs the orbits of stars at the center of the Milky Way.