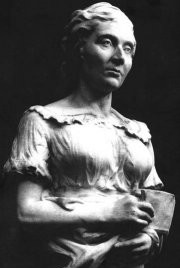 Main achievements: Pioneer of the elasticity theory. Works on the Fermat's Last Theorem.

Marie-Sophie Germain was a French mathematician, physicist, and philosopher. Despite initial opposition from her parents and difficulties presented by society, she gained education from books in her father's library and from correspondence with famous mathematicians such as Lagrange, Legendre, and Gauss. One of the pioneers of elasticity theory, she won the grand prize from the Paris Academy of Sciences for her essay on the subject. Her work on Fermat's Last Theorem provided a foundation for mathematicians exploring the subject for hundreds of years after.

Because of prejudice against her gender, she was unable to make a career out of mathematics, but she worked independently throughout her life. In recognition of her contribution towards advancement of mathematics, an honorary degree was also conferred upon her by the University of Göttingen six years after her death. At the centenary of her life, a street and a girls' school were named after her. The Academy of Sciences established The Sophie Germain Prize in her honor. Marie-Sophie Germain was born on April 1, 1776, in Paris, France, in a house on Rue Saint-Denis. According to most sources, her father, Ambroise-Francois, was a wealthy silk merchant, though some believe he was a goldsmith. In 1789, he was elected as a representative of the bourgeoisie to the États-Généraux, which he saw change into the Constitutional Assembly. It is therefore assumed that Sophie witnessed many discussions between her father and his friends on politics and philosophy. Gray proposes that after his political career, Ambroise-François became the director of a bank; at least, the family remained well-off enough to support Germain throughout her adult life. Marie-Sophie had one younger sister, named Angélique-Ambroise, and one older sister, named Marie-Madeline. Her mother was also named Marie-Madeline, and this plethora of "Maries" may have been the reason she went by Sophie. Germain's nephew Armand-Jacques Lherbette, Marie-Madeline's son, published some of Germain's work after she died.

When Germain was 13, the Bastille fell, and the revolutionary atmosphere of the city forced her to stay inside. For entertainment she turned to her father's library. Here she found J. E. Montucla's L'Histoire des Mathématiques, and his story of the death of Archimedes intrigued her. Germain decided that if geometry, which at that time referred to all of pure mathematics, could hold such fascination for Archimedes, it was a subject worthy of study. So she pored over every book on mathematics in her father's library, even teaching herself Latin and Greek so she could read works like those of Sir Isaac Newton and Leonhard Euler. She also enjoyed Traité d'Arithmétique by Étienne Bézout and Le Calcul Différentiel by Jacques Antoine-Joseph Cousin. Later, Cousin visited her in her house, encouraging her in her studies. Germain's parents did not at all approve of her sudden fascination with mathematics, which was then thought inappropriate for a woman. When night came, they would deny her warm clothes and a fire for her bedroom to try to keep her from studying, but after they left she would take out candles, wrap herself in quilts and do mathematics. As Lynn Osen describes, when her parents found Sophie "asleep at her desk in the morning, the ink frozen in the ink horn and her slate covered with calculations," they realized that their daughter was serious and relented. After some time, her mother even secretly supported her.

In 1794, when Germain was 18, the École Polytechnique opened. As a woman, Germain was barred from attending, but the new system of education made the "lecture notes available to all who asked." The new method also required the students to "submit written observations." Germain obtained the lecture notes and began sending her work to Joseph Louis Lagrange, a faculty member. She used the name of a former student Monsieur Antoine-August Le Blanc, "fearing," as she later explained to Gauss, "the ridicule attached to a female scientist." When Lagrange saw the intelligence of M. LeBlanc, he requested a meeting, and thus Sophie was forced to disclose her true identity. Fortunately, Lagrange did not mind that Germain was a woman, and he became her mentor. He too visited her in her home, giving her moral support. Germain first became interested in number theory in 1798 when Adrien-Marie Legendre published Essai sur la théorie des nombres. After studying the work, she opened correspondence with him on number theory, and later, elasticity. Legendre showed some of Germain's work in the Supplément to his second edition of the Théorie des Nombres, where he calls it très ingénieuse ["very ingenious"] (See Best Work on Fermat's Last Theorem). Germain's interest in number theory was renewed when she read Carl Friedrich Gauss' monumental work Disquisitiones Arithmeticae. After three years of working through the exercises and trying her own proofs for some of the theorems, she wrote, again under the pseudonym of M. LeBlanc, to the author himself, who was one year younger than she. The first letter, dated 21 November 1804, discussed Gauss' Disquisitiones and presented some of Germain's work on Fermat's Last Theorem. In the letter, Germain claimed to have proved the theorem for n = p – 1, where p is a prime number of the form p = 8k + 7. However, her proof contained a weak assumption, and Gauss' reply did not comment on Germain's proof.

Around 1807 (sources differ) the French were occupying the German town of Braunschweig, where Gauss lived. Germain, concerned that he might suffer the fate of Archimedes, wrote to General Pernety, a family friend, requesting that he ensure Gauss' safety. General Pernety sent a chief of a battalion to meet with Gauss personally to see that he was safe. As it turned out, Gauss was fine, but he was confused by the mention of Sophie's name. Three months after the incident, Germain disclosed her true identity to Gauss. He replied, "How can I describe my astonishment and admiration on seeing my esteemed correspondent M leBlanc metamorphosed into this celebrated person. . . when a woman, because of her sex, our customs and prejudices, encounters infinitely more obstacles than men in familiarising herself with [number theory's] knotty problems, yet overcomes these fetters and penetrates that which is most hidden, she doubtless has the most noble courage, extraordinary talent, and superior genius." Gauss' letters to Olbers show that his praise for Germain was sincere. In the same 1807 letter, Sophie claimed that if xn + yn is of the form h2 + nf2, then x + y is also of that form. Gauss replied with a counterexample: 1511 + 811 can be written as h2 + 11f2, but 15 + 8 cannot. Although Gauss thought well of Germain, his replies to her letters were often delayed, and he generally did not review her work. Eventually his interests turned away from number theory, and in 1809 the letters ceased. Despite the friendship of Germain and Gauss, they never met. When Germain's correspondence with Gauss ceased, she took interest in a contest sponsored by the Paris Academy of Sciences concerning Ernst Chladni's experiments with vibrating metal plates. The object of the competition, as stated by the Academy, was "to give the mathematical theory of the vibration of an elastic surface and to compare the theory to experimental evidence." Lagrange's comment that a solution to the problem would require the invention of a new branch of analysis deterred all but two contestants, Denis Poisson and Germain. Then Poisson was elected to the Academy, thus becoming a judge instead of a contestant, and leaving Germain as the only entrant to the competition. In 1809 Germain began work. Legendre assisted by giving her equations, references, and current research. She submitted her paper early in the fall of 1811, and did not win the prize. The judging commission felt that "the true equations of the movement were not established," even though "the experiments presented ingenious results." Lagrange was able to use Germain's work to derive an equation that was "correct under special assumptions."

After winning the Academy contest, she was still not able to attend its sessions because of the Academy's tradition of excluding women other than the wives of members. Seven years later this tradition was broken when she made friends with Joseph Fourier, a secretary of the Academy, who obtained tickets to the sessions for her. Germain published her prize-winning essay at her own expense in 1821, mostly because she wanted to present her work in opposition to that of Poisson. In the essay she pointed out some of the errors in her method. In 1826 she submitted a revised version of her 1821 essay to the Academy. According to Andrea Del Centina, the revision included attempts to clarify her work by "introducing certain simplifying hypotheses." This put the Academy in an awkward position, as they felt the paper to be "inadequate and trivial," but they did not want to "treat her as a professional colleague, as they would any man, by simply rejecting the work." So Augustin-Louis Cauchy, who had been appointed to review her work, recommended she publish it, and she followed his advice. One further work of Germain's on elasticity was published posthumously in 1831: her "Mémoire sur la courbure des surfaces." She used the mean curvature in her research.

In 1829 Germain learned she had breast cancer. Despite the pain, she continued to work. In 1831 Crelle's Journal published her paper on the curvature of elastic surfaces. Mary Gray records, "She also published in Annales de chimie et de physique an examination of principles which led to the discovery of the laws of equilibrium and movement of elastic solids." On June 27 of 1831, she died in the house at 13 rue de Savoie. Despite Germain's intellectual achievements, her death certificate lists her as a "rentière – annuitant" (property holder, not a "mathematicienne." But her work was not unappreciated by everyone. When the matter of honorary degrees came up at the University of Göttingen six years after Germain's death, Gauss lamented, "[Germain] proved to the world that even a woman can accomplish something worthwhile in the most rigorous and abstract of the sciences and for that reason would well have deserved an honorary degree."