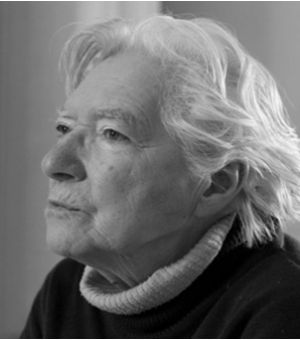 Main achievements: Discovery of Down syndrome

Marthe Gautier is a French medical doctor and researcher, best known for her role in discovering the link of diseases to chromosome abnormalities.
Marthe Gautier discovered a vocation for pediatrics at an early age. In 1942 she joined her sister Paulette who was about to complete her medical studies in Paris intending to become a pediatrician. She passed the entrance exam of the "Internat des hôpitaux de Paris" and spent the next four years as an intern gaining clinical experience in pediatrics.
In 1955 she submitted and defended her thesis in pediatric cardiology under the direction of Robert Debré. Her thesis focused on the study of clinical and anatomical pathology of fatal forms of rheumatic fever (rheumatic endocarditis) due to streptococcus infection.
Robert Debré, in charge of pediatrics in France at the time, offered Gautier a scholarship for one year at Harvard University in order to acquire knowledge in pediatric cardiology with two main objectives. The first was to eradicate rheumatic fever, using penicillin and the treatment of sometimes life-threatening cardiovascular disease with cortisone; the second was to create a department for diagnosis and surgery of congenital heart diseases for newborns and young children.
In September 1955, Gautier left for Boston. She was accompanied by Jean Alcardi and Jacques Couvreur, both Fulbright scholars, and the three became the first interns of the Hôpitaux de Paris to be awarded scholarships for the US. At Harvard, one of the tasks of her internship was to be trained as a laboratory technician working on cell culture. Besides the two objectives that had been set initially, Gautier was also working half-time as a technician in a laboratory for cell culture to obtain in-vitro cultures of fibroblast starting from aorta fragments.
After a year in Boston, Gautier returned to Paris. Meanwhile her job in the pediatric cardiology service at the Bicêtre Hospital in Paris had been given to a colleague during her absence. However, she learned that there was a position available at the Trousseau Hospital, in Raymond Turpin's team.
Turpin's research was focused on polymalformative syndromes, of which the most common is trisomy, characterized by intellectual disability and morphological abnormalities. At the time, Turpin favored the hypothesis of a chromosomal origin of trisomy but there was no laboratory for cell culture in France and the number of human chromosomes was estimated at 48, but without any certainty.

Laboratory cell culture
In 1956, biologists from Lund University in Sweden announced that humans have exactly 46 chromosomes. Turpin had many years earlier proposed the idea of culturing cells to count the number of chromosomes in trisomy. Gautier had recently joined the pediatrics group he headed at the Armand-Trousseau Hospital, and she offered to attempt this, since she had been trained in both cell culture and tissue staining techniques in the United States. Turpin agreed to provide her with tissue samples from patients with Down syndrome. With very limited resources Gautier set up the first in vitro cell culture laboratory in France.
In order to count the chromosomes, Gautier worked on fibroblasts derived from connective tissue, which were easier to obtain under local anesthesia. Although the principle of cell culture is simple, there were many practical obstacles to getting it to work under the primitive conditions available to Gautier, who was forced to use a personal loan to purchase laboratory glassware and, at times, her own blood as a source of human serum. She eventually confirmed that the protocol worked, using connective tissue from a neighbouring surgeon, taken during planned interventions in children. She used the "hypotonic shock" method followed by drying the slide after attachment in order to disperse the chromosomes of dividing cells and make them easier to count.
Using this protocol, Gautier found that the cells of normal children have 46 chromosomes. In May 1958, she observed an additional chromosome in the cells of a trisomic boy, the first evidence of chromosomal abnormalities in individuals with Down syndrome.

Announcement of results
At the time, the laboratories at the Armand-Trousseau hospital did not have a microscope capable of capturing images of the slides. Gautier entrusted her slides to Jérôme Lejeune, an intern at CNRS, who offered to take pictures in another laboratory better equipped for this task. In August 1958 the photographs identified the supernumerary chromosome in Down syndrome patients. However Lejeune did not return the slides, but instead reported the discovery as his own.
In January 1959, by studying new cases and to forestall similar research by the English, the Trousseau laboratory announced the results of the analysis of the slides in the Proceedings of the Academy of Sciences through a paper published with Lejeune as first author, Gautier second (her surname misspelled) and Turpin last author.
The Turpin team identified the first translocation and the first chromosomal deletion, resulting in publications Gautier co-signed.

Attribution of the discovery
In April 1960, the condition was named trisomy 21. As of 1970 the Lejeune foundation started to promote the discovery as sole work of Leujeune - omitting the co-authors. Gautier has told how she was put to one side by Turpin and by Lejeune who claimed responsibility for the discovery, even though it relied on the work that she had initiated and directed technically. Aware of having been manipulated Gautier decided to abandon trisomy 21 and to return to caring for children affected by cardiopathy.
On 31 January 2014, Gautier was due to speak about her role in the discovery at the seventh biennial congress on human and medical genetics in Bordeaux, and to receive the grand prize of the French Federation of Human Genetics. The Jérôme Lejeune Foundation obtained authorisation from the Bordeaux Tribunal de Grande Instance for bailiffs to be sent to film this session. At the last minute, concerned that the recording might be used in legal proceedings it could not afford to defend, the congress organisers decided to cancel her presentation and she received her award privately instead.
The ethics committee of the INSERM has issued a note in July 2014, reminding the decisive role of Marthe Gautier, and has built upon this case to remind the international rules currently in vigor for scientific publications and authors list. The note precises that "history of discovery is not identical to the history of science, and the process of validating knowledge remains very different«. The technical approach is a necessary condition for discovery- key role of Marthe Gautier : but quite often it must be extended pour make recognition emerge – priori contribution of Raymond Turpin and thereafter Jérôme Lejeune. As the discovery of trisomy would have been impossible without the mandatory contributions of Raymond Turpin and Marthe Gautier, it is regrettable that their names were not sustematically associated with this discovery, as much in terms of communication but also in the assignement of various awards and distinctions."

Marthe Gautier was directly appointed to the rank of Officer of the French Legion of Honor and was decorated on September 16th, 2014. Marthe Gautier has, in the past, declined this distinction twice before consenting to it "by indignation towards the impudence of the Lejeune Foundation”