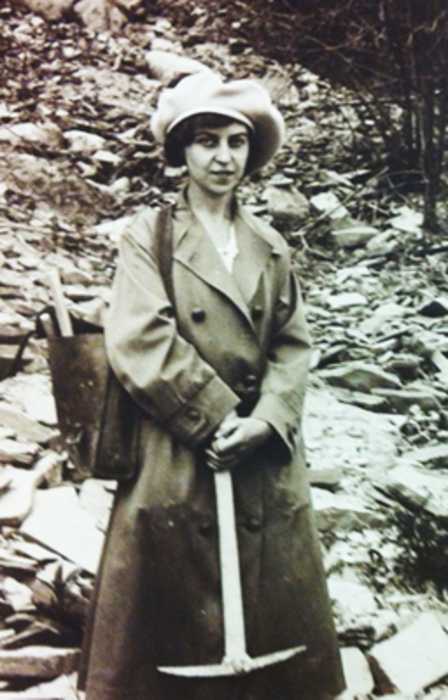 Main achievements: One of the pioneering researchers on the Palaeozoic fossil Bryozoa.

Madeleine Alberta Fritz was a Canadian palaeontologist. She was a professor at the University of Toronto, where she taught vertebrate studies in the department of Geology. Fritz's writing on the fossil Bryozoa and her research on the stratigraphy of Toronto and the surrounding areas were major contributions to the geological field.

As one of the pioneering researchers on the Palaeozoic fossil Bryozoa, a type of sea creatures that bond together to build joint skeletons composed of tiny chambers, Fritz later became known as "the great-grandmother of Palaeozoic Bryozoa".

Fritz worked at The Royal Ontario Museum as an associate director from 1936 to 1955, and then she later became the Invertebrate Palaeontology Curator at the ROM from 1955 to 1957. In 1956, she became a palaeontology professor at University of Toronto under the Department of Geology until her official retirement in 1967. Fritz was a member of the Geological Association of Canada and the Geological Society of America. She also belonged to the Canadian Confederation of University Women and the International Federation of University Women.

Madeleine Fritz was born in Saint John, New Brunswick. The area in which she grew up sparked an early interest in her fascination to the formation of mountains. Her father was a sea captain, so she spent many of her early years in and around the ocean. As a young girl she often played on the beach with marine life, which also fostered her initial interest in fossil invertebrates.

Fritz studied Arts and English at McGill University in Montreal. After graduating with a Bachelor of Arts degree in 1919, she went on to teach at Elmwood Private Girls School in Ottawa, Canada. While living in Ottawa, she meet Alice Wilson, an assistant palaeontologist at the Geological Survey of Canada, which was based out of Ottawa. Wilson was the first woman in Canada to be elected a Fellow of the Royal Society of Canada (in 1942, Fritz would become the second). When they met, Wilson was preparing to embark on a geological expedition to Lake Winnipeg. Since gender rules were still quite strict at the time, Wilson would not have been permitted to travel with any male colleagues. Therefore, she invited Fritz to join her on the expedition as her assistant while school was out for the summer. Fritz signed up as a "cook and canoeman," and accompanied Wilson for the six week expedition in Manitoba.

After returning from her expedition with Wilson, Fritz remained a teacher at Elmwood for one more year before deciding to enroll in the geology program offered at the University of Toronto.

While attending the University of Toronto in 1920, Fritz was the only female graduate student in the geology department. Despite this, Fritz mentioned that she felt accepted by those in her class and that no one ever tried to deter her from pursuing her degree in geology. She completed her M.A. in 1923 and her Ph.D. in 1926, making her the first woman in Canada to have ever received a Ph.D. within the geology/palaeontology field.

In 1927, Fritz was hired as an assistant at the Royal Ontario Museum of Palaeontology, which was affiliated with the University of Toronto. This position made her the only female geologist in Canada to hold an academic position in the field of geology during the interwar years.

In 1935, Fritz was hired as an assistant professor in the geology department at the University of Toronto. In 1955, Fritz became the curator of the Department of Invertebrate Palaeontology of the Royal Ontario Museum of Palaeontology, the first woman to hold this position. In 1956, Fritz became a full professor at the University of Toronto. It is important to note the length of time that it took for her to be promoted from assistant professor to full professor; this demonstrates lateral segregation. Fritz officially ended her career with retirement in 1967, but she continued to research human evolution and origin of the Earth for the majority of her life.

Fritz's career was a reflection of a successful female academic breakthrough in a field mainly dominated by males since it was associated with rugged work like mining and exploration. She broke barriers regarding the role of women in society as having one, mainly maternal career and pursued her graduate degree instead of marrying. Fritz, continued these accomplishments through participating in field work and publishing numerous research paper's while actively maintaining her administration and teaching roles.

Madeleine Fritz's contribution to palaeontology is remembered during the "Madeleine Fritz Annual Lecture in Palaeontology" event where namely women guest speakers discuss advancements in the geological field. It is also a space for discussion about new research and findings in the field. This event is held at the royal Ontario Museum.

Fritz received several honours, in 1942 she entered the Royal Society of Canada as the second woman to receive such honour within Canada. In 1967, Fritz received the Canadian Centennial Medal. In 1975, Fritz was one of 19 Canadian female scientists honoured in a display at National Museum of Natural Science.