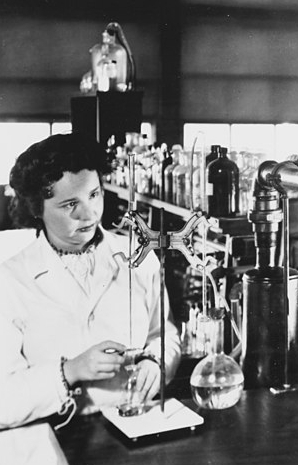 Gertrude Belle Elion was an American biochemist and pharmacologist, and a 1988 recipient of the Nobel Prize in Physiology or Medicine. Working alone as well as with George H. Hitchings, Elion developed a multitude of new drugs, using innovative research methods that would later lead to the development of the AIDS drug AZT.

Elion was born in New York City, to immigrant parents Bertha (Cohen) and Robert Elion, a dentist. When she was 15, her grandfather died of cancer, instilling in her a desire to do all she could to try and cure the disease. She graduated from Hunter College in 1937 with a degree in Chemistry and New York University (M.Sc.) in 1941. Unable to obtain a graduate research position, she worked as a lab assistant and a high school teacher. Later, she left to work as an assistant to George H. Hitchings at the Burroughs-Wellcome pharmaceutical company (now GlaxoSmithKline).

After several years of long range commuting, she was informed that she would no longer be able to continue her doctorate on a part-time basis, but would need to give up her job and go to school full-time. Elion made what was then a critical decision in her life, to stay with her job and give up the pursuit of a doctorate. She never obtained a formal Ph.D., but was later awarded an honorary Ph.D from Polytechnic University of New York in 1989 and honorary SD degree from Harvard university in 1998. She attended Brooklyn Polytechnic Institute (now known as Polytechnic University of New York) but did not graduate. Gertrude Elion died in North Carolina in 1999, aged 81.

She had moved to the Research Triangle in 1970, and for a time served as a research professor at Duke University. She had also worked for the National Cancer Institute, American Association for Cancer Research and World Health Organization, among other organizations. From 1967 to 1983, she was the Head of the Department of Experimental Therapy for Burroughs Wellcome. Elion never married, had no children, and listed her hobby as 'listening to music'. Rather than relying on trial-and-error, Elion and Hitchings used the differences in biochemistry between normal human cells and pathogens (disease-causing agents) to design drugs that could kill or inhibit the reproduction of particular pathogens without harming the host cells. Most of Elion's early work came from the use and development of purines.

Elion's inventions include: 6-mercaptopurine (Purinethol), the first treatment for leukemia and used in organ transplantation; Azathioprine (Imuran), the first immuno-suppressive agent, used for organ transplants; Allopurinol (Zyloprim), for gout; Pyrimethamine (Daraprim), for malaria; Trimethoprim (Septra), for meningitis, septicemia, and bacterial infections of the urinary and respiratory tracts. Acyclovir (Zovirax), for viral herpes; Nelarabine for cancer treatment. In 1988 Elion received the Nobel Prize in Medicine, together with Hitchings and Sir James Black. She was elected a member of the National Academy of Sciences in 1990, a member of the Institute of Medicine in 1991 and a Fellow of the American Academy of Arts and Sciences also in 1991. Other awards include the National Medal of Science (1991), Lemelson-MIT Lifetime Achievement Award (1997), and the Garvan-Olin Medal (1968). In 1991 she became the first woman to be inducted into the National Inventors Hall of Fame.