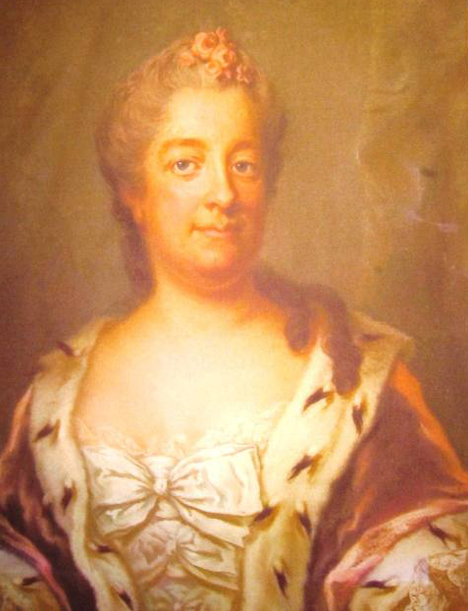 Eva Ekeblad (née De la Gardie; 10 July 1724 – 15 May 1786) was a Swedish countess, salon hostess, agronomist, and scientist. She was widely known for discovering a method in 1746 to make alcohol and flour from potatoes, allowing greater use of scarce grains for food production, significantly reducing Sweden's incidence of famine.

Ekeblad was the first female member of the Royal Swedish Academy of Sciences (1748).

In 1740, Eva married at the age of 16 the riksråd count Claes Claesson Ekeblad, and became the mother of seven children; one son and six daughters, Claes Julius Ekeblad (1742–1808) and Hedda Piper among them. Their spouses belonged to the elite of the Swedish nobility.

Upon her marriage, her father, Julius De la Gardie, gave Eva the estates Mariedal Castle and Lindholmen Castle, Västergötland. Her husband, additionally, owned the Stola Manor estate as well as a residence in the capital of Stockholm.

Because of the frequent absence of her husband on business, Eva Ekeblad was given the responsibility of the management of the three estates, including the tasks of supervising the bailiffs and presiding at the country-assemblies of the parishes of the estates. She is described as imposing and temperamental with great authority: fair toward the peasantry, whom she protected against abuse from the bailiffs in return for obedience, and as someone who did not hesitate to rectify and punish wrongdoings during conflicts with local dignitaries. She also had a leading role in the local aristocracy, and Stola manor was renowned for its good order.

In the Ekeblad residence in Stockholm, she hosted a cultural salon and was described by the wife of the Spanish Ambassador de marquis de Puentefuerte as "one of few aristocratic ladies whose honor was considered untainted". The first concert performances of the mass music of Johan Helmich Roman were performed in her salon at the Ekeblad House. She was on friendly terms with queen Louisa Ulrika.

After the death of her husband in 1771, she retired to the countryside. Mariedal and Lindholmen estates served as her dower estates, the former being her personal residence. She initially also kept control of her son's estate Stola, he being also absent from his estates like his father because of his career.

In 1775, her son Claes Julius Ekeblad (1742–1808) married Brita Horn, and three years afterwards Stola manor was granted to her daughter-in-law as a dower. In November 1778, Eva Ekeblad attended the royal court by making use of her rank in her capacity as riksrådinna (wife or widow of a riksråd) and was present as a witness at the birth of the future Gustav IV Adolf of Sweden. She stayed in the capital for two years, during which time she was much celebrated. She was offered to succeed Ulrika Strömfelt as överhovmästarinna (chief lady-in-waiting) to the queen, as well as offered the position of royal governess for the Crown Prince. However, though she was reportedly flattered, she was forced to refuse the offers of a position at court because her hitherto good health was affected by an illness that year which left her much weakened and made her periodically bedridden for her remaining eight years. She spent her last six years in Mariedal Castle, where she continued to be celebrated by the local aristocracy until she died.

In 1746, Ekeblad wrote to the Royal Swedish Academy of Sciences on her discoveries of how to make flour and alcohol out of potatoes. Potatoes had been introduced into Sweden in 1658, but had been cultivated only in the greenhouses of the aristocracy. Ekeblad's work turned potatoes into a staple food in Sweden, and increased the supply of wheat, rye and barley available for making bread, since potatoes could be used instead to make alcohol. This greatly improved the country's eating habits and reduced the frequency of famines.

She also discovered a method of bleaching cotton textile and yarn with soap in 1751, and of replacing the dangerous ingredients in cosmetics of the time by using potato flour (1752); she is said to have advertised the plant by using its flowers as hair ornaments.

In 1748, Eva Ekeblad became the first woman elected to Royal Swedish Academy of Sciences. There are no records of her ever having participated in the meetings of the Academy. In 1751, the Academy came to refer to her as an honorary rather than a full member, as the statutes confined membership to men.