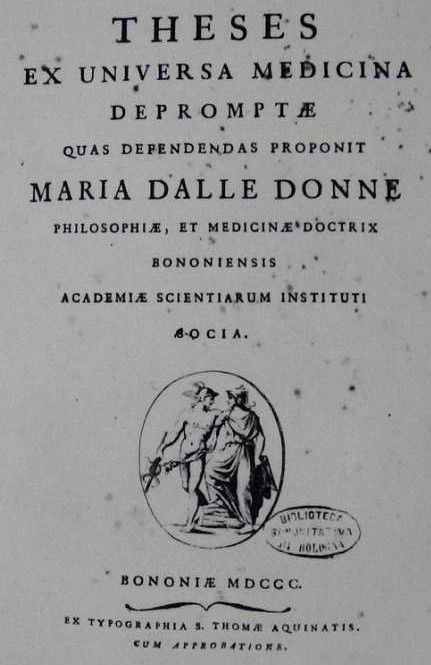 Main achievements: First woman having a doctorate in medicine.

Maria Dalle Donne (1778-1842), was an Italian physician and a director at the University of Bologna. She was the first female doctorate in medicine, and the second woman to become a member of the Ordine dei Benedettini Accademici Pensionati.

In 1800, Dalle Donne published three scientific papers. The first paper, on anatomy and physiology, was a review and commentary on work previously done on female reproduction and fertility, fetal malformations, and blood circulation in the uterus. The second paper suggested for the first time that diseases of female fertility be classified on the basis of symptoms. The third paper focused on midwifery and the care of newborns.

In 1829, Dalle Donne became the second woman, after Laura Bassi, to be inducted to the prestigious Ordine dei Benedettini Accademici Pensionati, in which she was given the title "Academic". In 1832, Dalle Donne became Director of the Department of Midwifery at the University of Bologna.