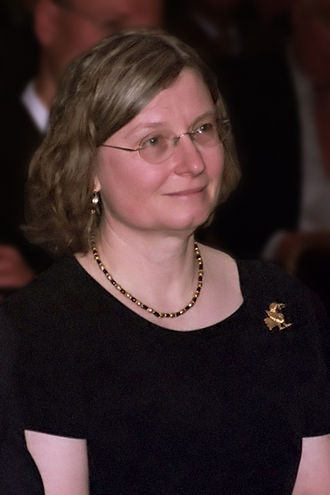 Ingrid Daubechies is a Belgian physicist and mathematician. She is best known for her work with wavelets in image compression.

The name Daubechies is widely associated with the orthogonal Daubechies wavelet and the biorthogonal CDF wavelet. A wavelet from this family of wavelets is now used in the JPEG 2000 standard. Her research involves the use of automatic methods from both mathematics, technology and biology to extract information from samples like bones and teeth. She also developed sophisticated image processing techniques used to help establish the authenticity and age of some of the world's most famous works of art including paintings by Vincent van Gogh and Rembrandt.

Daubechies was born in Houthalen, Belgium, as the daughter of Marcel Daubechies (a civil mining engineer) and Simonne Duran (then a homemaker, later a criminologist). She remembers that when she was a little girl and could not sleep, she did not count numbers, as you would expect from a child, but started to multiply numbers by two from memory. Thus, as a child, she already familiarized herself with the properties of exponential growth. Her parents found out that mathematical conceptions, like cone and tetrahedron, were familiar to her before she reached the age of 6. She excelled at the primary school, moved up a class after only 3 months. After completing the Lyceum in Hasselt she entered the Vrije Universiteit Brussel at 17.

Daubechies completed her undergraduate studies in physics at the Vrije Universiteit Brussel in 1975. During the next few years, she visited the CNRS Center for Theoretical Physics in Marseille several times, where she collaborated with Alex Grossmann; this work was the basis for her doctorate in quantum mechanics. She obtained her Ph.D. in theoretical physics in 1980.

Daubechies continued her research career at the Vrije Universiteit Brussel until 1987, rising through the ranks to positions roughly equivalent with research assistant-professor in 1981 and research associate-professor 1985, funded by a fellowship from the NFWO (Nationaal Fonds voor Wetenschappelijk Onderzoek).

Daubechies spent most of 1986 as a guest-researcher at the Courant Institute of Mathematical Sciences. At Courant she made her best-known discovery: based on quadrature mirror filter-technology she constructed compactly supported continuous wavelets that would require only a finite amount of processing, in this way enabling wavelet theory to enter the realm of digital signal processing.

In July 1987, Daubechies joined the Murray Hill AT&T Bell Laboratories' New Jersey facility. In 1988 she published the result in Communications on Pure and Applied Mathematics.

Daubechies is on the board of directors of Enhancing Diversity in Graduate Education (EDGE), a program that helps women entering graduate studies in the mathematical sciences. She was the first woman to be president of the International Mathematical Union (2011–2014).

Daubechies received the Louis Empain Prize for Physics in 1984, awarded once every five years to a Belgian scientist on the basis of work done before the age of 29. Between 1992 and 1997 she was a fellow of the MacArthur Foundation and in 1993 was elected to the American Academy of Arts and Sciences. In 1994 she received the American Mathematical Society Steele Prize for Exposition for her book Ten Lectures on Wavelets and was invited to give a plenary lecture at the International Congress of Mathematicians in Zurich. In 1997 she was awarded the AMS Ruth Lyttle Satter prize. In 1998, she was elected to the United States National Academy of Sciences and won the Golden Jubilee Award for Technological Innovation from the IEEE Information Theory Society She became a foreign member of the Royal Netherlands Academy of Arts and Sciences in 1999.

In 2000, Daubechies became the first woman to receive the National Academy of Sciences Award in Mathematics, presented every 4 years for excellence in published mathematical research. The award honored her "for fundamental discoveries on wavelets and wavelet expansions and for her role in making wavelets methods a practical basic tool of applied mathematics". She was awarded the Basic Research Award, German Eduard Rhein Foundation and the NAS Award in Mathematics.

In January 2005, Daubechies became the third woman since 1924 to give the Josiah Willard Gibbs Lecture sponsored by the American Mathematical Society. Her talk was on "The Interplay Between Analysis and Algorithm".

Daubechies was the 2006 Emmy Noether Lecturer at the San Antonio Joint Mathematics Meetings. In September 2006, the Pioneer Prize from the International Council for Industrial and Applied Mathematics was awarded jointly to Daubechies and Heinz Engl.

In 2010 she was awarded an honorary doctorate by The Norwegian University of Science and Technology (NTNU).

In 2011, Daubechies was the SIAM John von Neumann Lecturer, and was awarded the IEEE Jack S. Kilby Signal Processing Medal, the Leroy P. Steele Prize for Seminal Contribution to Research from the American Mathematical Society, and the Benjamin Franklin Medal in Electrical Engineering from the Franklin Institute.

In 2012, King Albert II of Belgium granted Daubechies the title of Baroness. She also won the 2012 Nemmers Prize in Mathematics, Northwestern University, and the 2012 BBVA Foundation Frontiers of Knowledge Award in the Basic Sciences category (jointly with David Mumford).

In 2015, Daubechies gave the Gauss Lecture of the German Mathematical Society. The Simons Foundation, a private foundation based in New York City that funds research in mathematics and the basic sciences, gave Daubechies the Math + X Investigator award, which provides money to professors at American and Canadian universities to encourage new partnerships between mathematicians and researchers other fields of science. She was the one to suggest Simons that the foundation should fund not new research but better mechanisms for interpreting existing data.

In 2018, Daubechies won the William Benter Prize in Applied Mathematics from City University of Hong Kong (CityU). She is the first female recipient of the award. Prize officials cited Professor Daubechies's pioneering work in wavelet theory and her "exceptional contributions to a wide spectrum of scientific and mathematical subjects...her work in enabling the mobile smartphone revolution is truly symbolic of the era." In December 16, in Shanghai, she won the Fudan-Zhongzhi Science award.

Daubechies won the 2018 Fudan-Zhongzhi Science Award and academician of the National Academy of Sciences(NAS) and delivered a speech on her report A Few Mathematical Chapters at the ceremony. She is part of the 2019 class of fellows of the Association for Women in Mathematics.