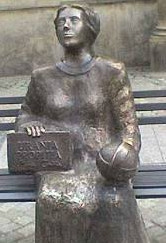 Maria Cunitz or Maria Cunitia was an accomplished German astronomer, and one of the most notable female astronomers of the modern era. She authored a book Urania propitia, in which she provided new tables, new ephemera, and a more elegant solution to Kepler's problem. The Cunitz crater on Venus is named after her. The minor planet 12624 Mariacunitia is named in her honour.

Maria Cunitz was born in Wohlau (Poland), as the eldest daughter of a Baltic German, Dr. Heinrich Cunitz, a physician and landowner who had lived in Schweidnitz for most of his life, and Maria Scholtz from Liegnitz, daughter of German scientist Anton von Scholtz (1560–1622), a mathematician and counselor to Duke Joachim Frederick of Liegnitz. The family eventually moved to Schweidnitz in Lower Silesia (Poland). At an early age Maria married (in 1623) the lawyer David von Gerstmann. After his death in 1626, she married (in 1630) Dr. Elias von Löwen, also from Silesia. Elias and Maria had three sons: Elias Theodor, Anton Heinrich and Franz Ludwig.

Maria's most significant work was composed on the estate of the Cistercian convent in ?ubnice under O?obok near Kalisz, Poland where, with her husband, she had taken refuge at the outbreak of the Thirty Years' War (they were of Protestant religion; her siblings, who stayed in Silesia, converted to Roman Catholicism). After their return to Silesia, they published, at their own expense, Maria's book in 1650. The work was dedicated to Holy Roman emperor Ferdinand III. In 1655, a catastrophic fire of Pitschen (Polish: Byczyna) destroyed their scientific papers, and also the instruments and chemicals used for making many types of medicines. This undercut their source of income. Maria became a widow (a woman whose spouse has died) in 1661, and died at Pitzen in 1664.

The year of Maria's birth is uncertain. No birth, baptism or similar documents have ever been located. The year was speculated about in the first major German-language publication about Maria Cunitz of 1798. Dr. Paul Knötel appears to be the first to give the year 1604 as the year of Maria's birth. This date seemed to make sense since her parents married the previous year. Other authors later appear to have repeated the same year. The proof that Maria was actually born in 1610 is furnished by an anthology with congratulation poems on her first wedding, in connection with a letter of Elias A Leonibus to Johannes Hevelius from the year 1651, found recently by Dr. Ingrid Guentherodt.

The publication of the book Urania propitia (Olse, Silesia, 1650) gained Cunitz a European reputation. She was acclaimed as the most learned woman in astronomy since Hypatia of Alexandria. Significantly for a technical publication of that period, her book was written both in Latin and German (stating that it was to increase the accessibility to her work). Urania propitia was a simplification of the Rudolphine Tables. It provided new tables, new ephemera, and a more elegant solution to Kepler's Problem, which is to determine the position of a planet in its orbit as a function of time. Today, her book is also credited for its contribution to the development of the German scientific language.