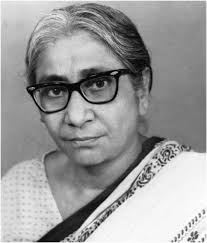 Main achievements: Research on vinca alkaloids, and the development of anti-epileptic and anti-malarial drugs.
Publications: List on Google Scholar

Asima Chatterjee was an Indian chemist noted for her work in the fields of organic chemistry and phytomedicine. Her most notable work includes research on vinca alkaloids, and the development of anti-epileptic and anti-malarial drugs. She also authored a considerable volume of work on medicinal plants of the Indian subcontinent.

Asima Chatterjee was born on 23 September 1917 in Bengal. An excellent student, Chatterjee grew up in Calcutta, attending school and subsequently enrolling at the Scottish Church College, of the University of Calcutta, graduating with honours in chemistry in 1936.

Asima Chatterjee graduated in 1938 with a master's degree in organic chemistry from the University of Calcutta, completing a doctoral degree there in 1944. Her doctoral research focused on the chemistry of plant products and synthetic organic chemistry. Among her notable instructors at the time were Prafulla Chandra Roy and Prof S.N. Bose. Additionally she also had research experience from the University of Wisconsin, Madison and the Caltech. Chaterjee's research centered around natural products chemistry and resulted in anti-convulsive, anti-malarial and chemotherapy drugs.

Awards and recognition: She was a Premchand Roychand Scholar of the University of Calcutta. She was the second woman after Janaki Ammal to be conferred Doctorate of Science by an Indian University, the University of Calcutta in 1944. From 1962 to 1982, she was the Khaira Professor of Chemistry, one of the most prestigious and coveted chairs of the University of Calcutta. In 1972, she was appointed as the Honorary Coordinator of the Special Assistance Programme to intensify teaching and research in natural product chemistry, sanctioned by the University Grants Commission (India). In 1960, she was elected a Fellow of the Indian National Science Academy, New Delhi. In 1961, she received the Shanti Swarup Bhatnagar Award in chemical science, in the process becoming the first female recipient of this award. In 1975, she was conferred the prestigious Padma Bhushan and became the first lady scientist to be elected as the General President of the Indian Science Congress Association. She was conferred the D Sc (Honoris causa) degree by a number of universities. She was nominated by the President of India as a Member of the Rajya Sabha from February 1982 to May 1990.