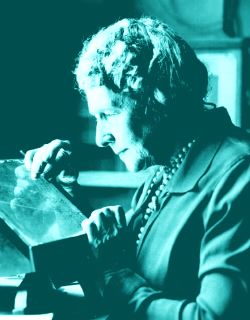 Annie Jump Cannon was an American astronomer whose cataloging work was instrumental in the development of contemporary stellar classification. With Edward C. Pickering, she is credited with the creation of the Harvard Classification Scheme, which was the first serious attempt to organize and classify stars based on their temperatures.

The daughter of shipbuilder and state senator Wilson Lee Cannon and his second wife, Mary Elizabeth Jump, Cannon grew up in Dover, Delaware. Cannon's mother had a childhood interest in star-gazing, and she passed that interest along to her daughter. Cannon had four older step-siblings from her father's first marriage, as well as two brothers, Robert and Wilson. Cannon never married but was happy to be an aunt to her brother's children.

At Wilmington Conference Academy, Cannon was a promising student, particularly in mathematics. In 1880, Cannon was sent to Wellesley College in Massachusetts, one of the top academic schools for women in the U.S. The cold winter climate in the area led to repeated infections, and in one instance Cannon was stricken with scarlet fever. As a result, she became almost completely deaf. Cannon graduated with a degree in physics in 1884 and returned home. Uninterested in the limited career opportunities available to women, she grew bored and restless. Her partial hearing loss made socializing difficult, and she was generally older and better educated than most of the unmarried women in the area.

Also during these years, Cannon developed her skills in the new art of photography. In 1892 she traveled through Europe taking photographs with her Blair box camera. After she returned home her prose and photos from Spain were published in pamphlet called "In the Footsteps of Columbus" by the Blair Company and distributed as a souvenir at the Chicago World's Columbian Exposition of 1893. In 1894, Cannon's mother died and life in the home grew more difficult. She finally wrote to her former instructor at Wellesley, professor of physics and astronomy Sarah Frances Whiting, to see if there was a job opening. Whiting hired her as an assistant, which allowed Cannon to take graduate courses at the college in physics and astronomy. Whiting also inspired Cannon to learn about spectroscopy.

In order to gain access to a better telescope, Cannon enrolled at Radcliffe College, set up near Harvard College for Harvard professors to repeat their lectures to the young Radcliffe women, which had access to the Harvard College Observatory. In 1896, Edward C. Pickering hired Cannon as his assistant at the Observatory. By 1907, she had received a MA from Wellesley. In 1896, Cannon became a member of Pickering’s Women, the women hired by Harvard Observatory director Pickering to complete the Henry Draper Catalogue mapping and defining every star in the sky to photographic magnitude of about 9. Anna Draper, the widow of wealthy physician and amateur astronomer Henry Draper, set up a fund to support the work. Pickering made the Catalogue a long-term project to obtain the optical spectra of as many stars as possible and to index and classify stars by spectra. If making measurements was hard, the development of a reasonable classification was at least as difficult.

Not long after the work on the Draper Catalogue began, a disagreement developed as to how to classify the stars. Antonia Maury, Henry Draper's niece, insisted on a complex classification system while Williamina Fleming, who was overseeing the project for Pickering, wanted a much more simple, straightforward approach. Cannon negotiated a compromise: she started by examining the bright southern hemisphere stars. To these stars she applied a third system, a division of stars into the spectral classes O, B, A, F, G, K, M. Her scheme was based on the strength of the Balmer absorption lines. After absorption lines were understood in terms of stellar temperatures, her initial classification system was rearranged to avoid having to update star catalogues. The mnemonic of "Oh Be a Fine Girl, Kiss Me" has developed as a way to remember stellar classification. The female astronomers doing this groundbreaking work at the Observatory earned 25 cents per hour, which was less than what the secretaries at the university earned. Cannon’s work was theory-laced but simplified. Her observation of stars and stellar spectra was extraordinary. Her Draper Catalogue listed nearly 230,000 stars, all the work of a single observer.

Cannon also published other catalogues of variable stars, including 300 that she personally discovered. Her career lasted more than 40 years, during which time women gained acceptance within the scientific community. Cannon died April 13, 1941 after being named the William C. Bond astronomer at Harvard in 1938. She was also the only single female to win the Henry Draper Medal from the National Academy of Sciences, in 1931. (Martha P. Haynes shared her honor with a male colleague.)