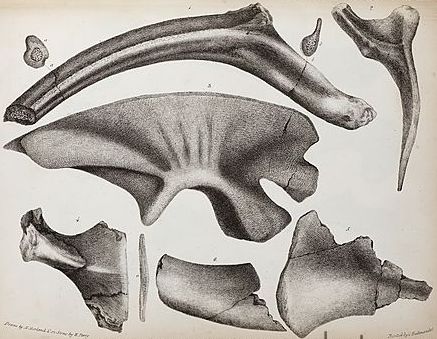 Main achievements: She produced illustrations and provided specimens for George Cuvier, the founder of paleontology.

Buckland was born in 1797 in Sheepstead House, Abingdon-on-Thames, to Benjamin Morland, a solicitor, Her mother, Harriet Baster Morland, died when she was a baby, and her father remarried, producing a large family of half-brothers and sisters. She was educated in Southampton, and spent a part of her childhood under the care of Sir Christopher Pegge, a Regius Professor of Anatomy in Oxford, who along with his wife supported her scientific interests.

In the midst of her teenage years she was intrigued by the studies conducted by Georges Cuvier and provided him with specimens, and illustrations. Buckland established a name for herself as a scientific draughtswoman, who helped Conybeare, Cuvier and soon to be husband, William Buckland.

Mary Buckland started her career as a teenager producing illustrations and providing specimens for George Cuvier, widely regarded as the founder of paleontology, as well as for the British geologist William Conybeare. She made models of fossils, and labelled fossils for the Oxford University Museum of Natural History, studied marine zoophytes and repaired broken fossils inline with her husband's instructions.

Mary Buckland assisted her husband greatly by writing as he dictated, editing, producing elaborate illustrations for his books, taking notes of his observations, and writing much of it herself. Her skills as an artist are on display in Mr. Buckland's largely illustrated work Reliquiae diluvianae, published in 1823, and in his Geology and Mineralogy in 1836. Her son noted that she was particularly "neat and clever in mending fossils" with specially developed cementing, and in assisting William Buckland's experiments to reproduce fossil tracks and many others. She assisted him when he was commissioned to contribute a volume to The Bridgewater Treatises.

Although Mary Buckland was in poor health after her husband's death, she continued her husband's work and branched out her own research. Examining micro forms of marine life through a microscope, with her daughter Carolin, and arranging a large collection of zoophytes and sponges, which she collected during her visits to the Channel islands of Guernsey and Sark with her husband. Much of her fossil reconstructions are held by the Oxford University Museum of Natural History.