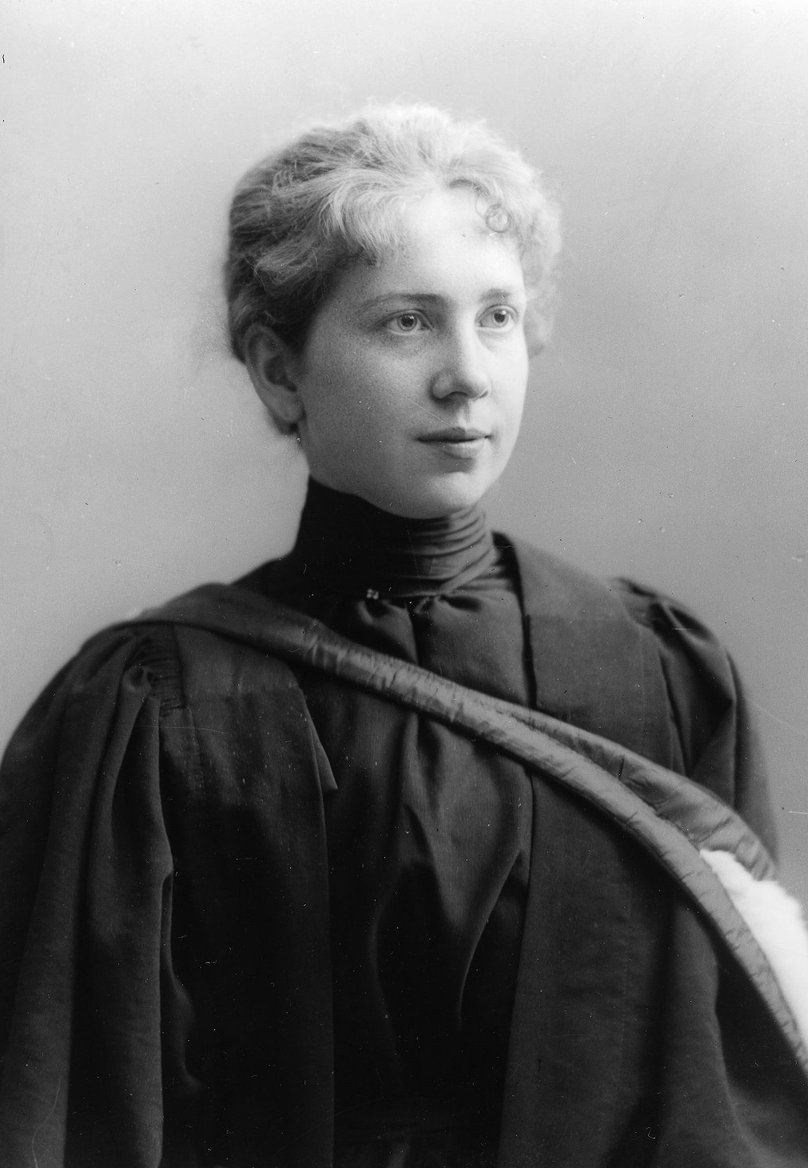 Main achievements: Discoverer of the recoil of radioactive atoms.

Harriet Brooks was the first Canadian female nuclear physicist. She is most famous for her research on nuclear transmutations and radioactivity. Ernest Rutherford, who guided her graduate work, regarded her as being next to Marie Curie in the calibre of her aptitude. She was among the first persons to discover radon and to try to determine its atomic mass.

Harriet Brooks was born in Exeter, Ontario, on July 2, 1876 to George and Elizabeth Warden Brooks. She was the third of nine children. Her father, George Brooks, worked at his own flour mill until it burned down and was not covered by insurance. He then supported the family by working as a commercial traveler for a flour firm. Brooks moved around Quebec and Ontario with her family during her childhood. At some point, she attended the Seaforth Collegiate Institute in Ontario. Her family finally settled in Montreal.

Of the nine Brooks children, only Harriet and her sister Elizabeth would attend university. Harriet Brooks entered McGill University in 1894, only six years after McGill graduated its first female student. Brooks won a scholarship for the final two years of her Bachelor's degree, but being a woman disqualified her from receiving a scholarship for her first two years. Brooks graduated with a first-class honours B.A. in mathematics and natural philosophy in 1898, and was awarded the Anne Molson Memorial prize for outstanding performance in mathematics.

Brooks was the first graduate student in Canada of Sir Ernest Rutherford, under whom she worked immediately after graduating. With Rutherford, she studied electricity and magnetism for her master's degree. Even before her thesis was completed, her work was published in the Transactions of the Canadian Section of the Royal Society in 1899. The same year, Brooks received an appointment as nonresident tutor at the newly formed Royal Victoria College, the women's college of McGill University. In 1901, she became the first woman at McGill to receive a master's degree.

After her master's degree under Rutherford, she also did a series of experiments to determine the nature of the radioactive emissions from thorium. These experiments served as one of the foundations for the development of nuclear science. Papers by Rutherford and Brooks in 1901 and 1902 were published in Royal Society Transactions and in the Philosophical Magazine.

In 1901, Brooks obtained a fellowship to study for her doctorate of physics at Bryn Mawr College in Pennsylvania. During her year there, Brooks won the prestigious Bryn Mawr European Fellowship. Rutherford arranged for Brooks to take this fellowship at his former lab at the University of Cambridge, where she became the first woman to study at the Cavendish Laboratory. While Brooks completed significant work during her time at Cambridge, her supervisor, J.J. Thomson, was preoccupied with his own research and ignored her progress.

In 1903, Brooks returned to her position at Royal Victoria College and rejoined Rutherford's group, carrying out research that was published in 1904. The following year, Brooks was appointed to the faculty of Barnard College in New York City. In 1906, she became engaged to a Columbia University physics professor. Dean Laura Gil of Barnard responded to Brooks' engagement by saying "that whenever your marriage does take place it ought to end your official relationship with the college". This began a heated exchange of letters in which Brooks conveyed that she felt she had a duty to both her profession and her sex to continue her work even after marriage. Brooks was backed by the head of Barnard's physics department, Margaret Maltby. However, Dean Gil cited the college's trustees, who argued that one could not be both a married woman and a successful academic. Brooks broke off her engagement and agreed to stay at Barnard.

At the end of 1906, Brooks moved to a retreat in the Adirondacks run by John and Prestonia Martin, two prominent Fabian Socialists. Through the Martins, she also became acquainted with Russian author Maxim Gorky. In October 1906, Brooks traveled with Gorky and a group of other Russians to the Italian island of Capri. During this time, Brooks met Marie Curie, and shortly after started working as one of Curie's staff at the Institut du Radium in Paris, France. Though none of Brooks' research was published under her name during this period, her contributions were considered valuable and she was cited in three contemporary articles published under the aegis of the Curie Institute. During this time, Brooks worked to secure a position at the University of Manchester. In the letter of recommendation Rutherford wrote for Brooks' application, he noted that "next to Mme Curie she is the most prominent woman physicist in the department of radioactivity. Miss Brooks is an original and careful worker with good experimental powers and I am confident that if appointed she would do most excellent research work in Physics". However, Brooks decided to terminate her physics career for unknown reasons.

In 1907, Harriet Brooks married McGill physics instructor Frank Pitcher and settled in Montreal. She became the mother of three children, two of whom tragically died in their teens. She remained active in organizations of university women, but no longer did any work in the field of physics.

The obituary of Harriet Brooks was published by the New York Times on April 18, 1933, recording that she had died the previous day in Montreal at the age of 57, crediting her as the "Discoverer of the Recoil of a Radioactive Atom." She died "of a ‘blood disorder’," probably leukaemia caused by radiation exposure. Rutherford wrote a highly laudatory obituary of Brooks in the journal Nature.

The importance of Harriet Brooks' contributions to physics became recognized in the 1980s as foundational work in the field of nuclear science. She was the first person to show that the radioactive substance emitted from thorium was a gas with molecular weight of 40-100, a discovery crucial to the determination that the elements undergo some transmutation in radioactive decay. Her research of radon and actinium was pioneering, and her brief research career was exceedingly accomplished. The Harriet Brooks Building, a nuclear research laboratory at Canadian Nuclear Laboratories was named for her. She was inducted into the Canadian Science and Engineering Hall of Fame in 2002.